More is More present their last scare event of the Summer and this time they decided to go out with a bang.  After visiting the first incarnation of the Hole just a month before, we weren't expecting many changes but we couldn't have been more wrong!

The production team really do live up to their name by offering us more every time we visit one of their events. Upon arrival we were given our hint sheet only to learn that the Hole had grown significantly; we now had 10 rooms to locate rather than the previous 6. The actual routes had also been lengthened,  meaning twice as many scares and plenty more running! After studying the new hint sheet that boasted new intriguing rooms such as ‘The Puppet Master’ room and ‘Rock a bye Zombie’. It was time to enter the dark underground tunnels.

This time we were split into groups inside the tunnels rather than outside and taken to a random area inside ready for the game to start. Although this gave us a sensation of being lost and alone, it did lack the panic and trepidation of the previous show where our guide was picked off and we were left to fend for ourselves That being said, we were now alone in the dark and already lost deep within the tunnels.

The following 90 minutes consisted of completing tasks and scenarios to retrieve the ingredients needed to escape. Much easier said than done. Just like our last visit we were bombarded by ‘creatures’ every time we would make a dash to a new room. We must commend More is More on the quality and quantity of the performers. They knew how to use the space and darkness to their advantage, especially the 10 year old zombie boy! The skilfully executed scares in the tunnels compliment the scenes in each room significantly. Whilst in The Hole there was never time for a breather. Once you escaped the creatures and entered a room, something even more menacing was waiting for you.

The experience relies heavily on audience participation with the characters. We were more than happy to re-unite a crazed killer with his mother and enter into the pitch blackness of ‘The Hive’ just as we did before. However the new rooms made us work even harder for our ingredients. More is More's imaginations ran wild with this attraction and the new scenes pushed levels to the max, from having to plunge our hands deep into maggots, to using a zombie as a puppet!

In our last review we were slightly confused on what happens if we got caught. More is More have rectified all confusion with a new twist at the end of the attraction. After running for our lives in the finale to ‘safety’ we found that more creatures were waiting to attack. Whilst being ushered to safety we where ‘scanned’ for the virus. Half of our team found that their hands had been marked, only to be seen with ultra violet lights. It was then our turn to be ‘zombiefied’ and attack the next group that ran from the finale!

Other than the slightly slower start we believe this was the best Evil Rising event to date. The whole event attacks your mind and body both physically and mentally. The new scenes and immersive new ending along added the fear and fun factors to an already solid attraction. We look forward to what More is More have in store for us during their Fear Factory Halloween Event 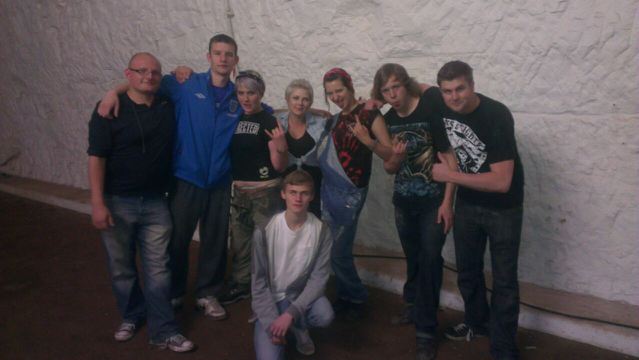 The ScareTOUR team exhausted after the event!