The original Evil Rising was one of our highlights of the 2012 Halloween season and played out across a 3 mile route around the city of Worcester featuring possession, witchcraft, devil worship and a few zombies for good measure.

Compared to the open spaces and city wide nature of the first event, Evil Rising 2 is in a much smaller and confined area - notably the famous Drakelow Tunnels near Kidderminster. Built in the 40's, these historic tunnels cover over 285,000 square feet and with the high roof, dusty atmosphere and echoey sounds throughout, a tour through them would be spooky in its own right (the venue is also reputedly haunted). But, of course, the More is More team have more devious plans than just a walk through a haunted venue and the spooky tunnels were filled with what seemed like hundreds of creatures all ready to lunge at us out of the dark.

The "ghouls" were everywhere and made a very good job of keeping us on track and heading quickly in the right direction in the confusing layout of the tunnels and rooms. With excellent use of dark spaces and minimal light effects, they kept everyone on their toes and expecting an attack at any moment. As well as the ghouls there were some very large and noisy props being thrown around and the sudden movement and echoey boom in the confined tunnels made the whole group jump and scream.

Like the first show, there were times where we were required to interact with the actors to held move the story forward and along the way we were faced with a certain number of challenges - the most memorable being a pitch dark tunnel, an unreliable flashlight and a whole swarm of ghouls!

With a completely new story to the original show, Evil Rising 2 dealt with some complicated theories around psychic energy, time portals and the evil rising of Jacob Lowe - an ex army private with a passion for death. If anything, the story was a bit too complicated in places and unfortunately the last scene and ultimate conclusion made no sense to a couple of us in the group as we were at the back and couldn't actually see and hear what was going on. We had also only been in the attraction about 45 minutes - so when we left this scene to be immediately faced with the bar and a group photo, it was disappointing that it hadn't ended with a massive bang or a chase that we could have all enjoyed.

Obviously due to the nature of the tunnels, running was positively discouraged in ER2 which meant some of the panic we experienced in ER1 was missing. Saying that though the preceding 45 minutes had really managed to scare our group to the extent that at times we were just holding onto the nearest person we could find. Which caused great hilarity when one of the team had realised they had grabbed onto one of the ghouls in the dark by mistake!

All in - the show was excellent with an amazing venue, some really effective impact scares throughout and some smart and interesting characterisation to the scenes. It certainly took us a long time to calm down afterwards! 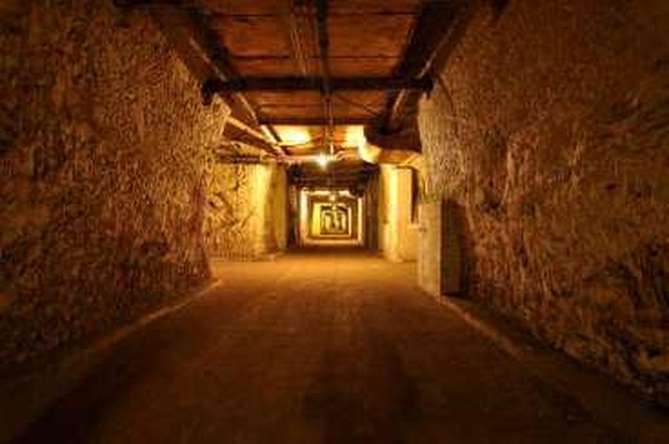 It's spooky with the lights ON!
An issue we must mention is that once we left the bar area, there were no signs or directions to show people how to get back to their cars. Disorientated from the experience we followed a group ahead of us and turned the wrong way out of the exit and ended up walking about a mile through darkened woodland on an remote country road. In fact our cars were actually parked to the left of the exit and a minibus was available to run people round between the start and finishing points. Unfortunately with no sign-posting or clear direction - we were not the only ones to get lost that night. The organisers have assured us that this will be changed tonight - so hopefully there will be no more groups wandering the woods Blair Witch Style trying to find their cars!

There are still tickets for Tues 19th February at the official Evil Rising website www.evilrising.co.uk.

Wow what an event. The venue was one of the best I have ever visited with the total lack of light made it very disorienting with all manner of things coming at the group from left right and centre. At times there were noises that sounded very close only to find they were no where near us and the same where things seemed to be far away only to be right up in your face. Some fantastic set pieces and actors made this for a very very thrilling scary event and very enjoyable from start to finish.

As said before the venue was pretty much perfect but I did feel that there was a certain lack of something. I love a great storyline in an attraction but it was a bit confusing at times and needed a little simplification in places to make it a bit less teasing on the mind and making you having to think of why some of the scenarios where there but each one was very well executed. I do think this was the only problem is a lot of the time while scared and screaming I was having to think about why this thing was here where as I think it could of done with a simple its coming to kill you approach in places.
Extremely enjoyable but needed simplifying from its intended work of art storyline.

that was AWESOME!!!! How do I get to do another???
I really want it to come back asap! It was so much better than I expected. So eerily real I was actually terrified but ridiculously over excited at the same time! So well put together, the "ghouls" were spot on and the scene and setting could not have been better! One of the best nights out I've had in years!
Thanks to everyone involved, massive well done, you truly scared me!!!

Also visited Evil Rising 2 this year or any other events?  - tell us what you thought here