More is More first crashed onto the scare scene with last Halloween's Evil Rising which created a chaotic and scary run through what appeared to be the deserted City of Worcester, This was followed up by a slower, more  dialogue and character led attraction that played out in the huge (but very dark) Drakelow tunnels near Kidderminster. Both worked equally well in different measures (see our reviews below), so for the third incarnation, the team have merged the two different attraction styles  and have created their most terrifying, exhausting and impressive show yet.

When we arrived at the tunnels, we were given the basic rules and regulations as well as a tip sheet on how to survive the different characters we might encounter along the way in rooms with intriguing sounding names such as Electric Shock therapy, The Hive and Sanatorium  We were split into small groups, led into the darkness and (after a cleverly staged and distractionary zombie attack, were left alone, stranded, without a torch, without a map and with the sounds of hungry monsters and the screams of other groups echoing around us. All we had to do was find the 6 key rooms, collect something from each one, find a way out and try not to be caught. It couldn't be too hard could it?

This was where we underestimated the size of the building and the sheer volume of monsters around. Everywhere we turned, we seemed to end up in a dead end or in a room full of creatures baying for our blood. We ran, we stumbled, and were chased round and round in circles struggling to find all the rendezvous points in the dark . Everywhere we went there were other groups of terrified guests, and as we ran past each other we would shout warnings or advice about what to expect up ahead. During some of the monster attacks, our whole group would scatter in all different directions and across the course of the 90 minute game, our group size morphed and changed as we either lost members or gained new ones who had been split from their friends!

In between all the running we had to locate the 6 key rooms to progress the story on and collect the required equipment to make it out the tunnels alive. Each scene was played expertly and treated us to some mad doctors and crazed patients who all relished the chance to interact with the audience. Unlike some shows - Evil Rising isn't a passive experience and it is up to guests to interact fully with each character to get the full impact of the story. From pretending to be one crazed killer's dead mother through to praising a sick doctor for his incredible brain surgery, the only ways to get the items we needed was to play long with the characters!

Of course, the problem with a free flowing game is that several times 2 or 3 groups would reach the scene around about the same time and would sometimes miss something important. Fortunately the creatures in the dark were pretty good as a stalling technique - blocking the door until the group ahead had finished. So we often ended up being chased away from a door - only to get lost in the tunnels again and have to struggle to try and find it again!

As we got closer to the end , the rooms and the challenges just seemed to get harder. The Hive was an increased and scary version of the pitch black tunnel from Evil Rising 2 and the route through to the finale was a combination of crazy strobe maze followed by pitch black corridors. To go from darkness to such brightness and back into darkness again left us all confused and disorientated and ready to get out. With a final pay off and one last chase to the door, we stumbled out into the warm summer's evening exhausted, sweaty  and ready for a drink at the handily placed temporary bar! 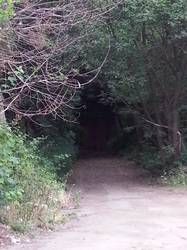 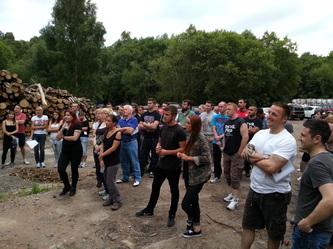 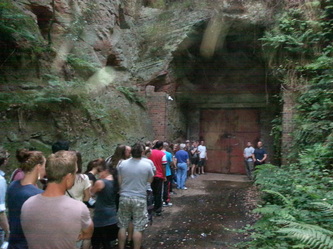 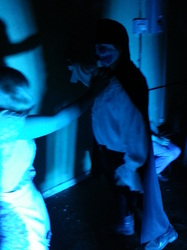 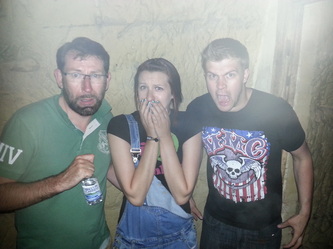 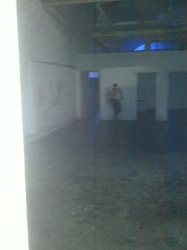 One of the unique key elements of Evil rising: the Hole was that anyone caught by the creatures would immediately change sides and join in the chasing too. The execution of this is till a bit haphazard as although one of our party was infected - they weren't marked or "bloodied up" in any way so after a few run ins with people not believing they were infected they stumbled back upon our group and continued through to the end with us as a normal player. The More is More team have agreed that the logistics of this will be tweaked by the next event in August - after all - no-one wants to be pay to go in and then get caught in the first 5 minutes, rendering the rest of the game play, puzzles and scenes redundant.

This aside - we absolutely loved this version of the show as it was a tremendous mix of scares, running and theatrical scenes. All throughout the actors in the scenes and playing the creatures were incredibly believable and utterly terrifying. So if you think your up for the physical challenge and looking for some full on chase action then we highly recommend you check out the Hole. The show returns again on August 31st.
For more information check out their website at www.evilrising.co.uk/