Although we only recently visited the Edinburgh Dungeon, one of our reviewers was in town for the Edinburgh festival so decided to pop along to see the show for themselves and check out the Summer of Stink event.

On approach to the dungeons we saw a cart outside with an actor playing a game with passers by. It set up the idea of the summer of stink and was a good way to interact and play games with passers by. It created a good indication of what was to come and his whistling left a lasting impression and really helped to get the hairs standing up on the back of my neck as we descended the stairs into the Dungeon itself.

Due to the ongoing festival, there was a queue to enter the dungeons and its seemed slow to get served. It's great that the attraction was busy but the cost of the attraction we wanted to just get in enjoy it. Maybe some characters or effects introducing a story would help with the queuing.

After getting through the entrance we had our photo taken - the groups really got into the role and I am sure the photos sold well that day. We ventured into the first room which was based around a court scenario. We didn't have enough seats so some people had to stand or squash in but the actor and scene was great. Interaction with the audience was spot on and the public seemed to enjoy themselves.

We moved on, the hen party in our group, lead the way and one was picked upon to enter a room all by herself. She seemed terrified and screamed at the bottom. The atmosphere was building and with an air of excitement we continued down into the dungeons. The next actor showed his skill when a member of the public was chosen to become a victim of his torture chamber. The member of the public swore and the actor dealt with it extremely well.

From the torture room we moved on to, in my opinion the let down of the show! The boat ride. We got on in the only two seats left which were right at the front. It was pitch black and line kept falling onto our faces. It did make the others scream, however, all of a sudden something happened which I think may have been a witch flying over, an actor to the left running around like a maniac then everything being switched off and onwards in the boat. As we were at the front, we missed everything and lost the plot of the area. The boat came to a stop and we were told to get off. It wasn't very long and thinking about how much that scene may have cost I wouldn't have bothered as the first two scenes were great. However to compensate the next room was probably the best.

The two actors in here moved around, jumped out of different areas, got people looking and moving around, whilst they were hanging over the public or crawling on the floor. This was a nice change as it made people feel very nervous about where the actors would next jump out.

After we were led out of this room we moved very quietly to the next room. The anatomy. Now, I am not sure if this was part of the act but as we walked along the corridor we could hear the actors in the next room talking. Chatting away then one opened the door, looked shocked and run through the crowd. Strange as it didn't link to anything else. The theatre actor was very entertaining and kept everyone interested with her story. Technology in here was great especially when the leeches escaped........

Burke and Hare in the next room, and our chance to sit at our own individual gravestone. The lights went out and the story begins. With little speakers behind your ears and chairs that go bump, the story was told well throughout the animated section of the dungeons.

We were taken from the room into a corridor and told to stand against the wall, we were all looking around for something to jump out and scare us but the actor soon made us forget about where we were. We were absorbing the story and watching the ghost in the window when  jets of air was let out by our ankles which made us scream and giggle. A great little section helped by an enthused actor.

William Wallace made his approach in the next room with an animated talking head, I think the actor in the room looked slightly bored or maybe after the previous actor not as reactive to the audience. The final act made us jump, and again having something happen from a completely different angle was refreshing.

We moved onto the next room and being a small person i really couldn't see what was happening. There was an actor explaining the story but some people were still walking in and it became really hard to hear. We were queueing up for the big drop or hanging scene. Without going into too much detail we really thought we could have been hung as our feet were hanging free and the sudden jolt made us scream. As we had been split up for the ride this meant half the group had already entered into the labyrinth before us. As they had been walking around for a bit the exit door was opened so when our group got there we walked straight through. Bit disappointing as this was our last room.

Overall the attraction, which many of the scenes I had seen before at the London Dungeons or Warwick Castle, was entertaining. The mixture of visitor interaction and acting was very good. The standard of actors varied from believable story teller to slightly bored and fed up, and some rooms you could hear the previous room going through the motions. The attraction is well priced for the amount of time you get, especially better if you pre-book. The staff were very friendly and the shop at the end well stocked with themed goodies. 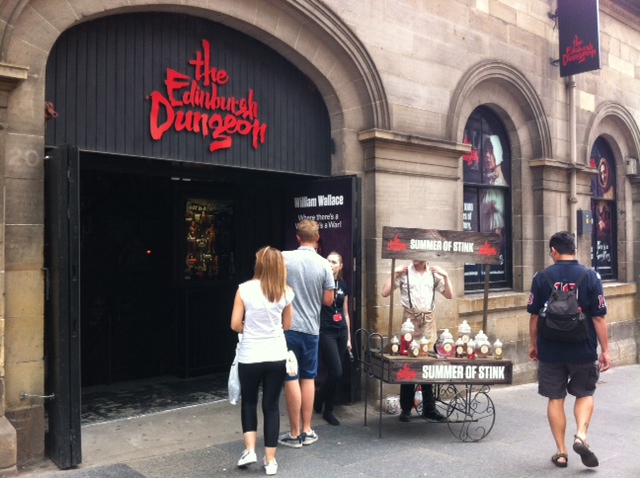 Edinburgh Dungeons is open every day except Christmas day.
For the latest information and to prebook discounted entry check out their website at www.thedungeons.com

Also visited Edinburgh, or any other Dungeon? Why not let people know what you thought? Click here for details

Really good for a laugh although there are a lot of thing that wouldn't be good for people with disability broken necks,back etc.