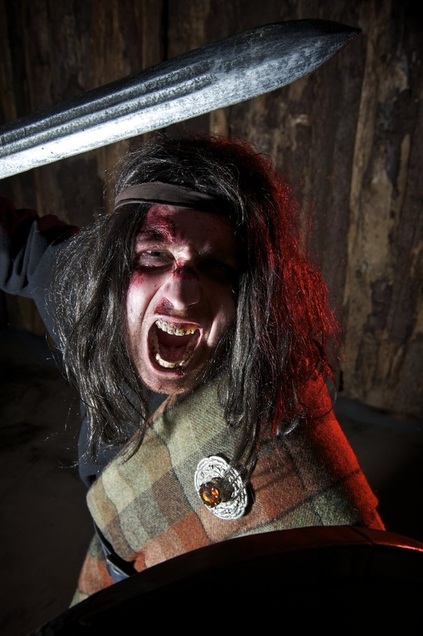 Although Edinburgh Dungeon has the honour of being the “scariest UK dungeon attraction” we have visited, we had a few concerns about the original William Wallace show that was never quite as exciting as some of the other scenes. The show used a ghost effect that would appear out of the darkness following a long speech with not much happening. It was clever, but we felt it was quite talky and gave great dis-service to the historic story of Wallace and his importance to Scottish history.

2012 has seen a full upgrade of the show, and William Wallace: Vengeance uses a combination of some of the Dungeon's most popular effects including face projections, audience interaction, sudden darkness and a good splattering of "blood”!

Unlike the passive nature of the previous show, guests feel a bit more immersed in the story now and the inclusion of a live victim as an "English Maggot" about to be executed, was another chance to drag an unsuspecting member of the audience into the action, leaving everyone else thankful that it wasn't them.

The new show takes its place in the line up near the end of the tour and is effectively the last tableaux before Extremis: Drop Ride to Doom (give or take the holding story of Half Hang'd Maggie Dixon). Seeing as Wallace was actually hung, drawn and quartered in real life, it's a shame that the final hanging couldn't have been used to tie the stories together.

Having said that, the creative team at the Dungeon have once again managed to use their regular tricks and effects to come up with a fun new show that entertains and startles in equal measure. Of course – you don't visit a dungeons show for just one show and the revamped Wallace joins an impressive line up which includes Burke and Hare and the terrifying Sawney Bean boat ride.

The Dungeons have always walked a fine line between factual history and graphical entertainment and William Wallace is a controversial figure to the Scottish people. The portrayal by Mel Gibson in the film Braveheart may have won Oscar nominations but is not necessarily a true reflection of this national hero. It's interesting that the Dungeon has gone down this more sterilised "Hollywood" view of the story instead of the more respected true history. We kept expecting one of the characters to start quoting lines from the film!

Interestingly - since our trip - Edinburgh Dungeon have issued a press release talking about the controversial nature of William Wallace and asking if he was a freedom fighter or a terrorist. Considering that Edinburgh has a lot of tourists from England, the show is very anti-English in places, so it will be interesting to see if anyone takes offence.  It will be interesting to see the results of the poll they have commissioned...

A Scottish tourist attraction is seeking public views of William Wallace 707 years after his death.

The Edinburgh Dungeon, whose actor led live shows bring to life Scotland’s most horrible history, is holding a public poll to gauge whether William Wallace was a freedom fighter or a terrorist. The poll comes as the attraction opens new show William Wallace: Allegiance this Saturday March 31.

Using professional actors and special effects, William Wallace: Allegiance takes visitors back to August 1305 when Wallace was condemned for treason and sentenced to be hung drawn and quartered.

“We had thought the opinion on Wallace’s legendary bravery was unanimous, but during the research process for the new show, there was great debate in our own team about whether Wallace was a terrorist or a freedom fighter.

“Some believe Wallace was a hero and wrongly condemned, whilst others argue he behaved like a terrorist, trying to change ‘policy’ through bloodshed.

“We’re presenting Wallace as a hero in our new show, we want to know what people think and whether the image of Wallace we are portraying is consistent with public opinion.”

After experiencing William Wallace: Allegiance, Dungeon goers will be presented with a ballot paper asking them to tick a box as to whether they believe William Wallace was a hero and wrongly condemned, or a terrorist who deserved to be punished.

Wallace himself infamously argued against his condemnation for treason in 1305 by saying "I could not be a traitor to Edward, for I was never his subject."

The Dungeon plans to run the poll from March 30 to April 15 as a wide range of locals and tourists enter the Dungeon on family outings during the Easter holidays.

The results of the poll will be used to ensure the Edinburgh Dungeon’s new show content delivers a satisfying experience for visitors taking into account public opinion as well as historical fact.

The hosting of the Dungeon’s William Wallace poll comes at a topical time for Scottish politics as the Scottish National Party lobby for independence from Britain.
For  more details about Edinburgh Dungeon and to see the full line up of shows - why not visit www.thedungeons.com

Have you experienced Edinburgh Dungeon? Why not leave us a review. Click here for more details.