On a dark night in October in a deep gloomy basement in the centre of Edinburgh, we worked very hard on not screaming for our Mummy! We were very grateful for the other people around us, reasoning there was safety in numbers despite having been proven wrong a number of times that night already. We were in a very unsanitary looking bar run by a very unhappy and seemingly deranged landlord, splattered in fresh blood and sadly quite plague ridden. As if he wasn’t scary enough, he was insistent on telling us a story of someone who scared him. We stood, like deer in headlights, around the table in his bar and held our breath... partially because of fascinated fear and partially to prevent us sucking up the plague that was in the air.

The story our haunting bar man told us was of a silver tongued swindler called Stingy Jack, a drunkard who became a Halloween nightmare when he tricked the Devil himself into agreeing that he would never take his soul. Foolish Jack kept his soul but when his body died and neither heaven nor hell would admit him, Jack was doomed to walk the earth. The Devil unburdened him of his head as final revenge for tricking him, and in its place the Devil gave Jack a turnip with a lantern inside... and this was the very pub where Jack used to drink every night. A little chill went through the terrified motley assembly... 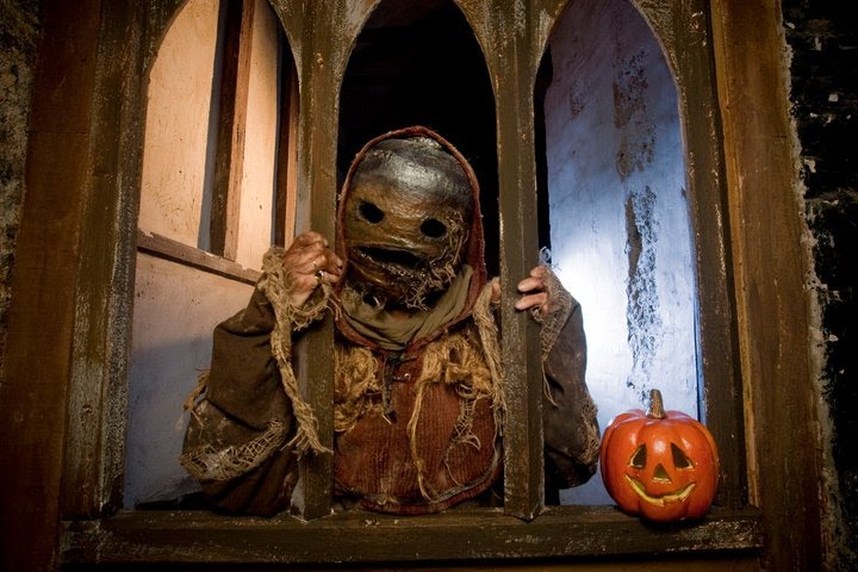 Edinburgh Dungeon is the historical and educational underground lair where audience members are scared by actors, rides, high tech video installations and all manner of technological gadgets. They take you on a journey as a convicted criminal through some of the terrors of Britain. Old classic scenes such as the opening court room, torture room and doctor Knox’s surgery remain, but have received a revamp. This is most noticeable in the Sawny Bean room, where the lair of the infamous cannibal family has been redesigned to allow the hyper energetic inhabitants to perform incredible acrobatics and emerge suddenly from hidden nooks as if by magic. Two video screens in the lair finish the tale of the Beans, by introducing Sawny himself and the soldiers that came to finish the creepy creatures off.

But there are also a lot of tantalising changes. The most striking of which being the shocking finale where the audience (if they are brave enough, and in good enough health) are hanged, thus ending their wicked lives. It may sound a little extreme, but the effect is achieved through a high tech ride hidden unbelievably at the very depths of the dungeon that drops you 15 feet into darkness and will frighten up a scream from even the most hardened of scare tourists! A good many people who had managed to keep their cool through all sorts of horrors were finally broken by the hanging and, in case they try to lie about it later, the dungeons are kind enough to take a picture of you as you drop so everyone can see just what a big baby you really are.

Meanwhile,we started this review in the pub where Stingy Jack used to drink. Our unappetizing host was explaining how the only thing that would prevent Jack o’Lantern from haunting his establishments was sacrifices... sacrifices like us. Suddenly the lights went out.“Here he comes...” muttered the barman in the dark.
And at that point we really screamed!

For the latest information and to prebook discounted entry check out their website at www.thedungeons.com