Delectably Dead by Hide and Shriek

Delectably Dead is a new zombie themed dining experience that opened last week at The Cliff’s Pavilion in Southend. Created by the talented team from Hide and Shriek, we were unsure what the evening would entail, but knew that it would contain their usual mix or horror and humour. As we were led into the room and to our table, it was clear that a lot of effort had gone into setting the scene, with atmospheric theming and every guest issued with a ration book which served as our menu choice.

The show itself played out throughout the night with different dramas and and vignettes happening around the room. Clearly the soldiers that were locked in the room with us, had other issues than just the zombies outside, and soon tensions were boiling over as they jostled for position and survival.

Throughout the show there were several attacks and/or death’s and with these – no expense was spared on the amount of blood flying around. Our table was at the back of the room so it wasn’t until we were pulled forward to try and comfort a wounded soldier, that we realised how wet and bloody the floor and walls were. In fact, one poor woman at the front of the room was completely covered in blood after the team decided to perform emergency surgery to extract a bullet right on her table!

Despite the show playing better to those in the front of the room, the actors spent a lot of time walking around to ensure everyone was involved with the storyline, which helped keep the narrative flowing smoothly (which is difficult because at times they needed to allow a lull in activities so guest could focus on their food)

The food itself was a full part of the experience with our main meals being served in Gerry cans and other courses designed to look like they had been created from scraps and rations. Desert was served as a tin of peaches and the salmon terrine was presented like a tin of cat food. The food was outstanding and was quite generous in portion. Nobody left the venue hungry at the end of the night – well apart from some of the zombies!

As you would expect, tensions built up all through the evening and once desert was out the way, the show kicked into high gear as the zombie attack became more pronounced, and the finale included filmed sections, extreme violence, zombie breaches, lots of gunfire and slightly bizarrely – a song and dance routine that left us laughing at the sheer audacity!

All in – we thoroughly enjoyed the show but did think that we would have enjoyed it better if we weren’t at the back of the room. All tickets for the event were sold at the same price and unlike other theatre shows where you expect a more distant view of the action in the cheap seats – we did feel that we missed out on lot of the detail. The actors tried to include us where they could, but maybe the action scenes should have been spread around the venue a bit so everyone gets a chance to see the gore/drama up close?

Delectably Dead won’t be to everyone’s liking as the drama was about the lives and interactions of the real characters and was not just about zombies. In fact, the zombies were merely a catalyst for what happened on stage, so don’t expect the room to be overtaken by the undead. After all – the audience are sat down throughout the show so there is nowhere for them to run. That’s not saying that the zombies DON’T get in but they are dispatched quickly and noisily before they can get too close!

We know this was only the second performance of the show and we are sure some of the sightline issues will be resolved going forward. We genuinely enjoyed the whole evening and found it to be something completely unique and different. So, unlike the table next to us who talked all the way through the show, join in, listen, participate and enjoy – Hide and Shriek have delivered something totally different to anything that has gone before! 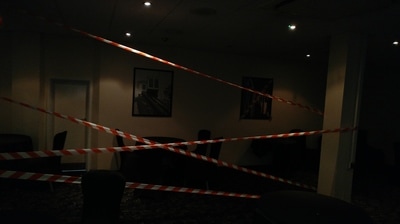 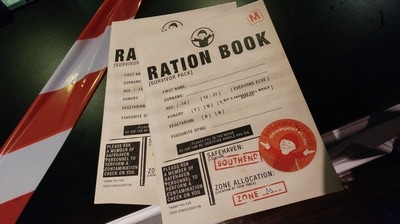 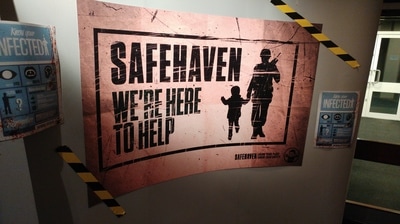 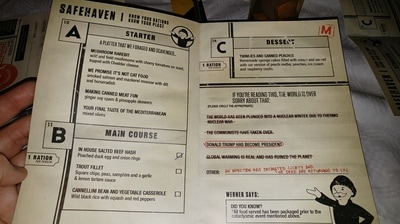 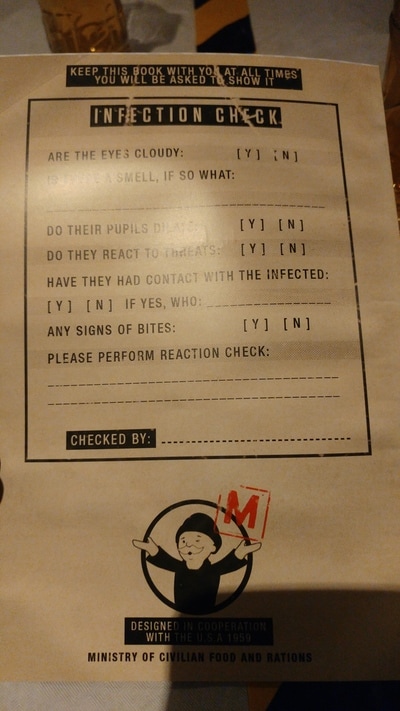 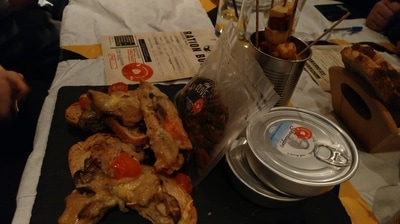 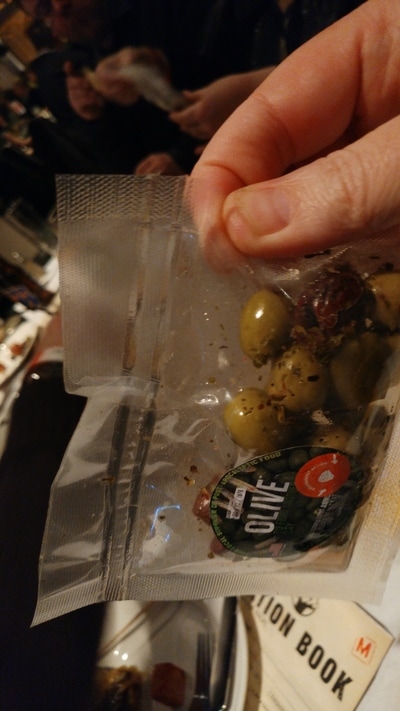 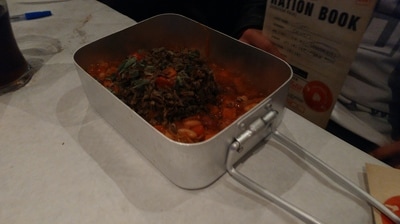 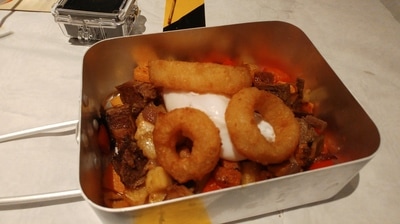 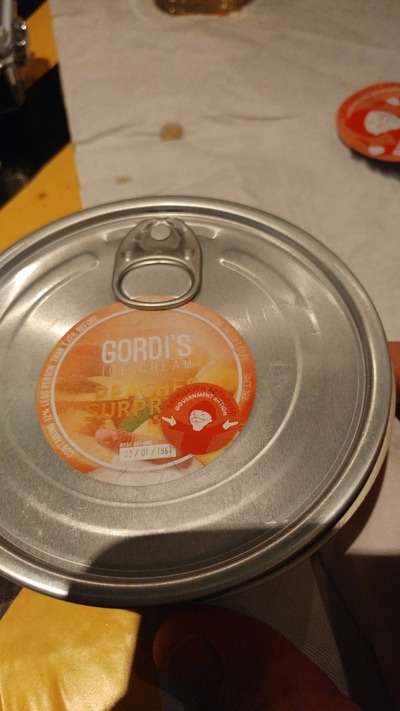 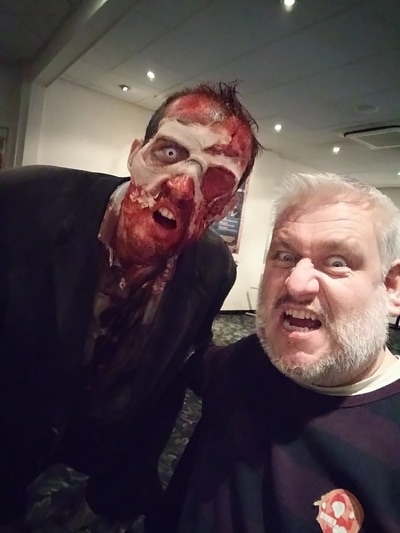 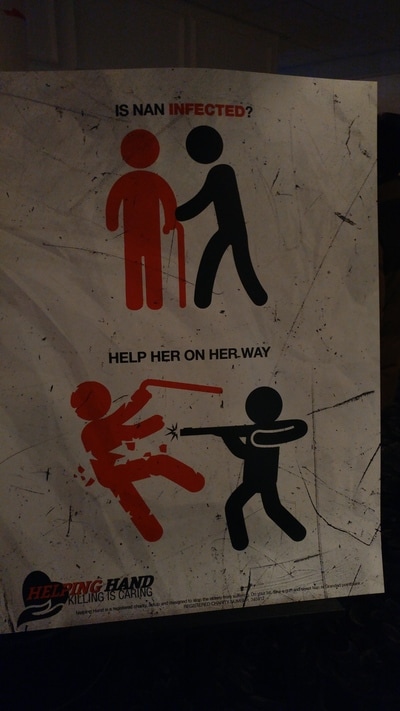 ​I went to see Delectably Dead at the Cliff's Pavilion for a birthday present.
Extremely entertaining!! More adrenaline-inducing than nightmare inducing though -- which is my preference anyway!

As an action-lover, I got involved with the plot as much as I could, and felt I gained a lot more from it this way -- the food was amazing, though this was probably helped by my engagement with the show - I tried to imagine myself in a real situation, and the food was therefore amazing to me, considering it was ration food! The desert was amazing, and the way it was served was really well thought out (as thought it was really intended for survival!) and was really cinematic.

The actors/actresses were fantastic, and I offered water to them while in-role, and also engaged in conversation with them -- I found myself missing the 'characters' when I went home! I'd really found them convincing.

I joined in to the point where I feel I may have mucked up their script/set order of events: at one time, something is meant to happen involving a zombie, and I think I (and some other people) were too engaged with survival to allow that part of the plot to happen... but the show continued brilliantly, as though our intervention was meant to happen/it was a real situation.

I also joined in with the audience when they were prompted to give opinions -- and my opinion differed to the rest of the jeering crowd, and I then overheard one audience member whisper about me "She must be one of them" (involved with the actors), and I wasn't!

The one thing I feel let it down was that those that weren't engaging with it as much as we were made it less realistic. I get that some people don't want to genuinely believe it's a zombie apocalypse, but I went to have a survival experience, while others seemed to go to mock it in places. Have a laugh by all means, but don't ruin the realism! Some people were also being unkind to the actors/actresses and were disruptive, but the actors/actresses improvised in response brilliantly!

I'd definitely go again. IF YOU GET THE CHANCE, GO! But try to have fun while engaging with it as fully as you can! Pretend you're really in the situation -- you'll enjoy a richer, more memorable experience -- one that really does stay with you!

Downfall: I'm up for action-fuelled realism, when others aren't (understandable but unfortunate)

This was a complete let down the venue was too busy, too noisy , too many drunk people and terrible food for the price. Such a shame as their other events have been well worth a visit .

​Thank you for taking the time to send us your feedback regarding Delectably Dead - we are sorry to hear your experience was not as we would have hoped. Hide and Shriek is a small creative company, that has always embraced feedback (good or bad) in an effort to continually improve, and I would like to assure you that your comments will be the foundation for improvements.

Unfortunately, a number of audience members contributed to a higher than normal/expected level of ambient noise within the room - despite repeated requests from our cast, Cliffs Pavilion personnel, and even other audience members to be quiet during performance parts of the evening. We have performed Delectably Dead a number of times, and this is the first instance in which we have had issues of this nature, and I can only apologise for any detrimental impact this had on your evening. I am going to be liaising with the Cliffs Pavilion this week to work with them on this matter.

Delectably Dead is an evening organised by the venues that book us to perform. We are booked by venues to provide the entertainment aspect - whilst they provide and run all other aspects such as the food, venue, pricing, ticketing, service times, etc. I will pass your comments onto the venue management, for them to investigate into. If you would like to discuss any aspect of your evening further, I would be more than happy to arrange to call you at a time which is convenient for you. Please just email me your contact details to boo@hideandshriek.co.uk.