In our review of this year's main event  - we finished with the sentence - "Seeing how scared we were during the normal show, it will be interesting to see just how much more extreme they can get!". We never did make it back ourselves but one avid ScareTOUR reader did and sent us this incredible review for our "YOU Review" section: 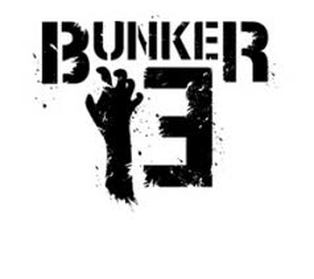 On Saturday the 28th of October, we drove down to Magna Science Centre in Rotherham to experience the pure terror that was Bunker 13. This was definitely the scariest maze I visited this season. Although saying that, I would never have guessed what was in store; and upon arrival I was completely blown away – the setting alone was ominous beyond anything I could have ever imagined. Based in a gigantic disused steelworks, all that was visible was the imposing outline of this gigantic shadowed structure, with a row of dim glowing red lights in the side of the building. Distant, echoing screams accompanied by the droning hum of what seemed to be a generator, reverberated into the car park for our group to hear even before we set foot inside. And against a backdrop of night, the whole place was given a terrifyingly isolated feel.

So, even before we entered the front of the Science centre, our group was giddy with nervousness just at the setting! We collected our wristbands and were escorted in small groups to an introduction room where a ‘soldier’ went through the safety precautions.
“No matter how f***** up it gets down there, just go with the flow”, were the reassuring final words before we set off down our chosen path of doom.

In short, Bunker 13 was a maze themed around test subjects who had undergone medical experimentation, and was a network of mostly bare corridors and the grungy rooms of said ‘patients’. However, despite there not being excessive props or decor between rooms, the use of lighting and dry ice fog made up for it extremely well and set the  idea of a secure medical unit  perfectly.

Generally, you couldn’t see a thing due to darkness and thick white fog between rooms enabling many, many startle scares.  I must commend the actors for working so well in these conditions, as being the navigator of the group the second time around, I found myself blindly fumbling through space having no idea where I was going! Speaking of which, another feature of Bunker 13 that made it so successfully scary was the amount of actors – there were mad test subjects lurking around every corner! And the small group sizes made sure no man or woman was safe from attack...

In the Over 18’s event a tactic was used that I’d never witnessed before in a scare attraction– picking off a member of our group, which I think is a really fantastic idea to create an atmosphere of realism about what’s going on (and, on reflection I regret not going along with it when the actors initially chose me!). The last we saw of the member of our group who was taken, was them being escorted off with a bag over their head, and then sat down in a cage. Apparently they were intimidated and sent through the rest of the maze alone! The rest of the maze following this abduction was a whirlwind of crazed patients lunging from the shadows, complete disorientation, and an absolutely terrifying strobe lit cage to finish with actors weaving in and out and over the mesh walls to get at you!

Having previously visited Haunted Live & Xtreme which was also produced by GNG Entertainment & Curious Village Productions (which I found more amusing than scary although never the less very good), evidently they are improving in every attraction they do and becoming all the more scarier. To conclude this review I will say that not only was this a brilliantly executed production, but that I also look forward greatly to any future productions from GNG Entertainment/Curious Village productions.

I cried I was so scared! But i loved it!

Have you experienced Bunker 13? (especially the over 18s show) - please let us know what you thought