Edinburgh is a beautiful and gothic city. But despite its beauty it is steeped in a dark history of murder, smelly streets, plague ridden underground tunnels and battles. All this means that surely if you are to visit one attraction that fills you in on all of the above then it has to be the Edinburgh Dungeons! Upon my arrival of course I had the customery photograph taken accusing me of drunk and disorderly behaviour... They know me well! Then into the holding cell where you await your fate. All talky boxes (mobiles) are to be turned off before embarking into the first room to meet the Judges room where I was to be accused of being Sweaty Betty, but makes a change from witchcraft I suppose but the real fun begins when you venture to the next room to meet the Witch Pricker!

She's looking for witches but especially that of one Agnes Finnie. The actress here was one of my favourites, she was very quick witted, on the ball and definitely gave us all a good scream. The highlight here though is whilst trying to rid ourselves of the witch it seems the room is cursed and begins to spin. Literally! Out of all the Dungeons, I personally love this it is definitely one of my favourite shows from all sites. After we finally stopped spinning and we have gathered our wits we then venture to the torturer's room to meet, well, the torturer.

Much like the other dungeons it is the same but still good fun however the actor here seemed more subdued but still entertaining none the less. After this we went to the Cannibals Cave but not before a good jump scare by one actor passing by through the corridor. This was certainly well received with plenty of screams from the group. The cannibals cave is exceptionally dark and does definitely get the adrenaline going, excellent theming and quite a long scene though I did feel perhaps slightly too long. However I don't know if this was due to the actress being new or if perhaps she was awaiting another performer. There was one member from the group who was separated and sat on a stool above us and it felt like that something was to happen to her but nothing did. In fact other than being separated from the group there was no point to her separation or reference to her made. Still a good scene as we learned about the cannibals and the blood thirsty family with another excellent jump scare of a body dropping down but as mentioned before it felt either too long or something was missing.

However still enjoyable we finally escaped the flesh munching lovers and found ourselves in the anatomy theatre. Initially I thought it was going to be the typical plague room scene that is the same across many of the Dungeons, however I was pleasantly surprised to see it was clearly changed to a different script about bodies being brought in for dissection under suspicious circumstances. Some would say that the bodies were VERY recently deceased. I was picked out for demonstration of how they drained the body using the various tools of the time. Very nasty smelly business indeed. Very pleased with the change however again I felt the performer seemed subdued in his deliverance. Still a good education with a couple of laughs in between though. But then onto the graveyard we go to meet the people whom brought the freshly dead bodies to be dissected. The famous Burke and Hare duo. You don't actually see them it is just a great use of sound and special effects. I won't spoil it. Another excellently themed room it was almost sad that this seemed to be the shortest scene in the whole experience.

Rescued from the murderous clutches of Burke and Hare ee find ourselves in Mary Kings Close. The famous underground street famed for its torment of plague and stinking from people emptying their buckets of... Waste out into the middle of the street whilst shouting 'Gardy Loo'. Of course it's no use shouting it to warn us as we still get covered in... Well you can guess. Again a good scene but the performance wasn't very strong. But this was rescued by the next scene. The haunted tavern. Here we learn of the tragic story of a girl whom fell in love with a captain but after one night of passion he disappeared. Embarrassed and facing potential ruin her family marry her off to an old obese slob of a lord. But after the marriage the lords son comes to visit him and it is non other than the captain whom the girl fell in love with. They rekindled their secret love but sadly was discovered in the tavern. The remaining story leads you to believe that the lord murdered both his son and his young wife. But either way her ghost still haunts in search of her live and revenge. Excellent use of special effects, strobes and jump scares here with this scene and very good acting too. Once leaving here it appears you have been accused of witchcraft and are to be hanged. In other words it is time for the drop ride.

If however you do not fancy the drop ride then you can venture onto the next room which is a mirror maze meant to represent the afterlife or the Edinburgh Vaults. Eventually once you find your way out then you are safe and sound back into the real world. All in - it was a very enjoyable experience. It is certainly one of the best themed Dungeons I have visited and will definitely return. Some of the scenes could have been better performed but I won't judge too harshly if it was due to being new, nervous or something going wrong. It was still a fun attraction and well worth a visit. Even the visitors toilets were entertaining with the grim toilet sound effects. Also new for Halloween, the Ghost Story room has changed to be about Mary Queen of Scots so do visit for this if you get the chance.

​Witch Hunt at The Edinburgh Dungeon

We have visited The Edinburgh Dungeon multiple times in the past, and over the last few years we have seen new scenes join the line up including The Street of Sorrows, and The Green Lady (see our previous reviews below)

New for 2017 is a brand new show which was advertised as a world first and combines multiple effects and actors to create a genuinely impressive scene. The story was set up in the opening court room as the Witchfinder interrupted our trial, with an effective jump scare, which then led into the new show. We entered a circular room with a live “witch” tied up ready to be burned. As the Witch finder interrogated us, it soon became clear that this witch was about to unleash her powers and we would be caught in the middle!

What followed was a combination of spining room, a moving floor, mechanical effects, and a loud soundtrack ending impressively with our witch levitating a few feet off the ground while cursing us all!. Everything worked together perfectly with the actors seamlessly interacting with the sounds and effects happening around them. We wouldn’t be surprised to see some of these effects appear in other new Dungeon shows in the near future as the combination of everything was stunning to experience.

With the Witch Hunt effectively being the second show of the experience, it really sets up the rest of tour, including the usual Edinburgh subjects such as Sawney Bean, The Green Lady and Extremis drop ride (currently called Drop Dead: Drop Ride, yet still referred to as Extrmis in the dialogue.) One final big difference about the Edinburgh Dungeon is that it has retained its large gift shop at the end (it was recently upgraded to a new Market St theme with hidden effects between the stands), unlike Blackpool and London which have turned their shops into a themed tavern to calm your nerves.

Edinburgh remains our favourite of the 5 UK Dungeon attractions, as we still think it has the most jump scares throughout. With the recent additions and removal of some of the weaker shows (William Wallace was retired last year), the show remains as fresh and exciting as when we first visited it. 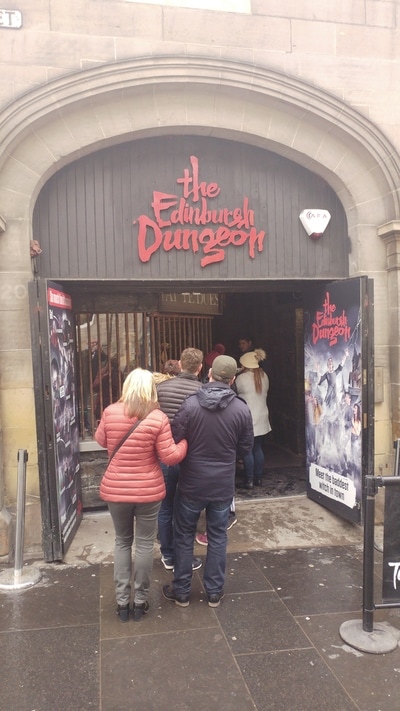 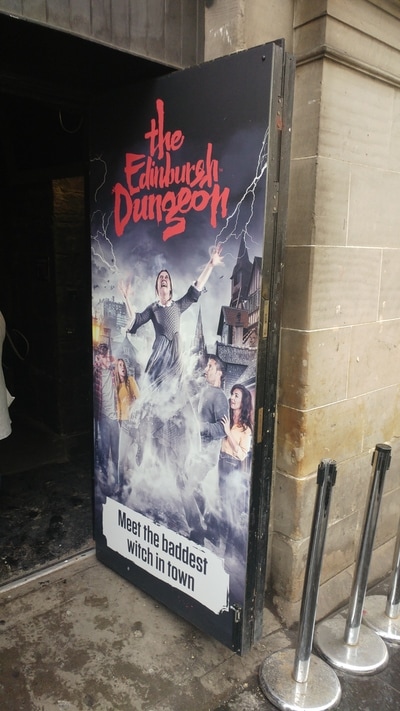 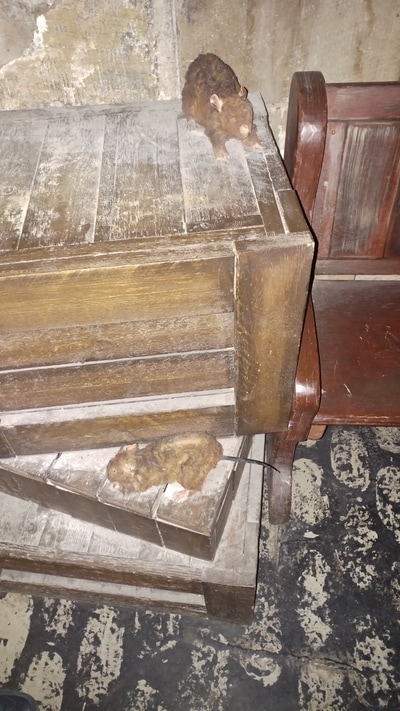 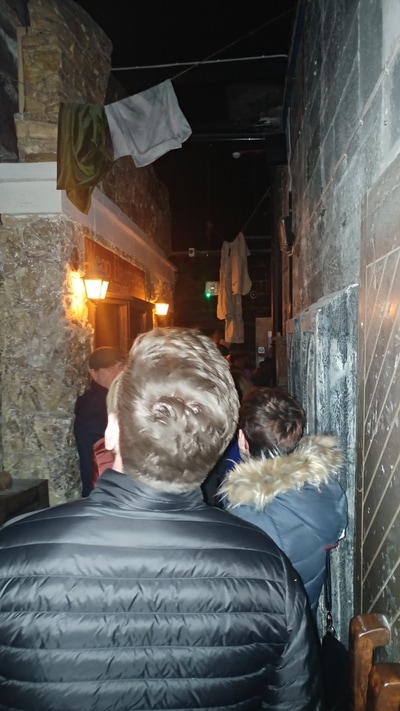 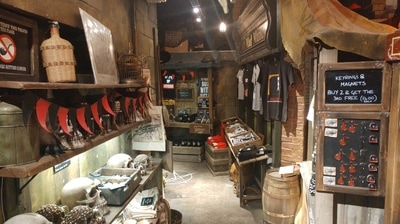 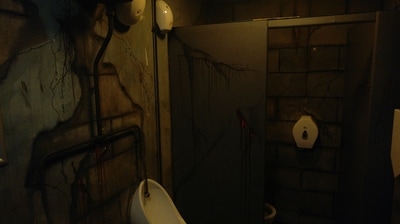