The first documentary to take a look at the UK scare attraction industry with contributions from Broadwitch Hauntfest, Faceless Ventures and Horrify Me

"Haunted houses for Halloween have spawned a growing subculture of extreme "full contact" terror simulations. But how far is too far?"

"After the Gerard family's haunted attraction Phobia House is shut down, they band together and rebuild for their scariest season yet."

"This is the first installment of a documentary series about the nation's best haunted attractions. The Story behind the scare takes you to 12 world class haunted attractions to learn how they got their start, what they are, and some of their most notable features"

Our review - There are some great shots within some traditional American haunts and glimpses into many effects that have been recreated over here in the UK in recent years!

"In early 2011, Rich Teachout quit his lucrative job to focus on creating a one-of-a-kind haunted attraction. He and his partner Janel dedicated every moment, ounce of energy, and dollar to making their "Scream Park" a reality. "Monsters Wanted" is the story of their self-proclaimed madness and the industry, culture, and people who share it"

"Family of Fear follows an eclectic group of artists, actors, and all around spooks as they come together to make Arx Mortis in Killen, Alabama one of the scariest attractions in the country. Many of the spooks have suffered from bullying, depression, dysfunctional family, and being treated as outcasts. The haunt is their home and the other spooks are their family."
​
​Available on Amazon Primeare their family.

​"A masked serial killer turns a horror-themed amusement park into his own personal playground, terrorizing a group of friends while the rest of the patrons believe that it is all part of the show."

Our review - cheesy fun with some grusome kills

Available to rent on Amazon

​Available on Amazon Prime as The Houses of Halloween

"Recovering from the trauma of being kidnapped last Halloween by the Blue Skeleton - a group who take "extreme haunt" to another level - five friends decide they must face their fears in order to move on. Heading back out on the road to visit more haunted house attractions, signs of the Blue Skeleton start appearing again and a new terror begins."

Our review - We loved this - if only for the fact that ScareCON is featured in it!

Available on Amazon as Blue Skeleton

"Six of the world's scariest psychopaths escape from a local Asylum and proceed to unleash terror on the unsuspecting crowd of a Halloween Funhouse, whose themed mazes are inspired by their various reigns of terror."

Available to rent on Amazon

"Scare Zone is OLIVER's pride and joy. Sure, it's just another strip-mall Halloween Horror House, but as always, he's put his heart and soul into it. The dysfunctional 'scream team' learns to work together while someone or some-thing is out to make the horror REAL."

"Five years after an unexplained malfunction causes the death of 15 tour-goers and staff on the opening night of a Halloween haunted house tour, a documentary crew travels back to the scene of the tragedy to find out what really happened."

​Available on Amzon Prime with episode 2 and 3 on Shudder

"On Halloween, a group of friends encounter an "extreme" haunted house that promises to feed on their darkest fears. The night turns deadly as they come to the horrifying realization that some nightmares are real."

"Alexandra reluctantly tags along for Slasher Sleepout, an extreme event that is part camping trip, part haunted house, and part escape room. But when the fun turns deadly, Alex has to play the game if she wants to make it out alive."

"Two years after a tragic accident, six college girls are invited to a party inside an elaborate Halloween funhouse. Once inside, the girls realize their hosts' intentions are not all fun and games."

"Four teenagers go looking for a legendary haunted house that gives you money back for every floor you can complete. Once finding it, they realize the house is much more terrifying than a normal Halloween attraction - the house knows each of their secrets and one by one uses them against the teens."

​Available to rent on Amazon

"College students visit a secluded Halloween haunt. There they discover, the scariest thing about a haunt in the middle of nowhere, is the people who work there."

"Clancy and his carnival of misfits, roll into a sleepy mid-western town for their annual Halloween festival. Some are looking for a good time. Clancy has something else on his mind."

"Darkwalker centers around a haunted house amusement park near Fresno, Californa called Hobb's Grove (yes, it's a real place), where a group of teenagers get Halloween jobs working there. What they don't know is the land the attraction was built on has a bloody history. They soon realize they are in for more than just a Halloween job, when one by one they start dying off. soon they find a monstorous creature called, DARK WALKER, has risen to take vengence on the trespassing patrons."

"Nine people find themselves trapped in a warehouse that contains the remains of the old Frightworld Amusement Park - a place haunted by the spirit of Verden Fell, a serial killer who died there a year before."

​Available to hire on Amazon 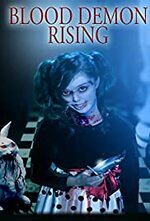 "Two couples go to a Haunted House Amusement where the two girls are taken by a Demon that has been risen from hell and his henchman . The boys break in and try to risque them but are caught in the attempt. A Jesuit Priest sent by the church to investigate finds himself in the middle and battles the Demon to the death, as Vampires and Zombie robed creatures wonder the Haunted Amusement all the while."

​Available on Amazon Prime
Please note that the the details regarding which streaming service these movies are on, was correct at time of going to press.

Have you also seen these, or visited any attractions recently? - tell us what you thought here