After the success of the London and Edinburgh tours, Ghost Bus Tours finally made its way to the reportedly most haunted city in Europe, Eboracum!... or to us modern day folk, York.

Having been on the London tour in previous years we were interested to see how this one compared, and our team member Mackenzie who knows a lot about the ghosts of York herself, went to check it out...

Awaiting for its guests at Exhibition Square, opposite the York Theatre Royal is the dark and imposing vehicle which was once used for funerals in London but is now known as, The Ghost Bus! A very creepy and eerie sight it is, especially at night! Greeted by a charming and dry witted conductor named Ramsey Trot I climbed onto the 'hop on hop off' and made my way upstairs to ensure a good view. Having a great knowledge of the city and its spirits I was keen to hear if they had anything to tell that I didn't know about or indeed how true to the history and ghosts of York it would be... No pressure then!

Departing at 7.30 on the dot we set off and our lovely conductor told us of the city's dark and grisly history as we travelled past some famous hot spots including ones not always easy to find, for example the final resting place of Dick Turpin. I was pleased to find that the tour was very accurate in its knowledge of York and its resident spooks.

Unlike the London Ghost Bus Tour however there is only one conductor during the whole experience. Not that a second one was needed, it worked just as well without, though he does have a little friend, Abigail Parp, a paranormal investigator whom he communicates via the buses CCTVi system which is shown on the TV screens placed on either end of the bus for the guests to see. She has been left to investigate the strange goings on at the now closed and abandoned Terry's Chocolate Factory, famous for... you guessed it, Terry's Chocolate Orange but now famous for its ghostly and unexplained sightings! Sadly though she proves to be pretty useless much to the conductors despair!

During the tour as well as learning about York's bloody history and hauntings we were are asked to take part in a few seances to help contact some of the restless spirits lurking in the area... a dodgy bunch of characters if I do say so myself. I would love to elaborate more on what happens but then I that would be spoiling the whole experience for you. I will therefore close by saying this... Go. whatever you are doing in York, tourist or resident, go. It is a splendid addition to the city - informative, hilarious and spooky. But I will give you a word of warning... Do not upset the driver. He's a violent man and apparently has a nasty habit of randomly flipping the bus into the River Ouse just for the hell of it if he's been on the lash... which appears to be every night! Good luck. 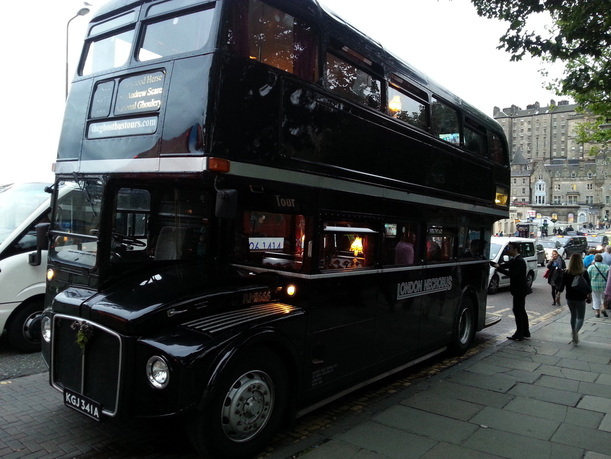 For more details - check out their website - www.theghostbustours.com/
ScareTOUR review of The London Ghost Bus