​
It's been a while since we visited The Ghost Bus Tour in London so when the opportunity arose we couldn't resist.

The Ghost Bus is one of London's more established tours but it is unlike any other bus tour. Yes you get to see the sights of London, but this is also a theatrical tour with comedy, which educates guests about some of London's darker and most barbaric happenings and events. Visiting a number of London's most famous landmarks such as Parliament Square, Monument and Westminster Abbey, as well as a number of not so famous locations, the tour tells of the darker events that took place over the years.

The tour departs just of Trafalgar Square where a very impressive double decker Route Master bus, with its funeral hearse like interior awaits its guests.  As the tour sets off the hosts set the scene and use their knowledge of the gruesome events, and comedic wit to entertain their guests throughout the tour. Our hosts, Reginald the bus conductor and Mr Hinge the Health and Safety Inspector, like to entertain their guests, and on occasion will get up close (but never touch you).

On a number of occasions we were jumping in shock, cringing at the gruesome events and then roaring with laughter at their slap stick comedy and story telling. This coupled with the special effects and happenings on the bus itself, all add up to a very entertaining experience.

The tour usually lasts around 75 minutes but on our visit, London road works and traffic were a challenge and we were on board over 1.5 hours. This wasn't a problem though as it gave our hosts the additional challenge of keeping us entertained for longer! Fortunately with their quick wit and easy banter, they passed this challenge with flying colours!.

In summary, The Ghost Bus Tour is a great way to see the city, especially as it is a perfect mix of dark humour, horror and sightseeing! As well as London, the team also run tours in York and Edinburgh
​ 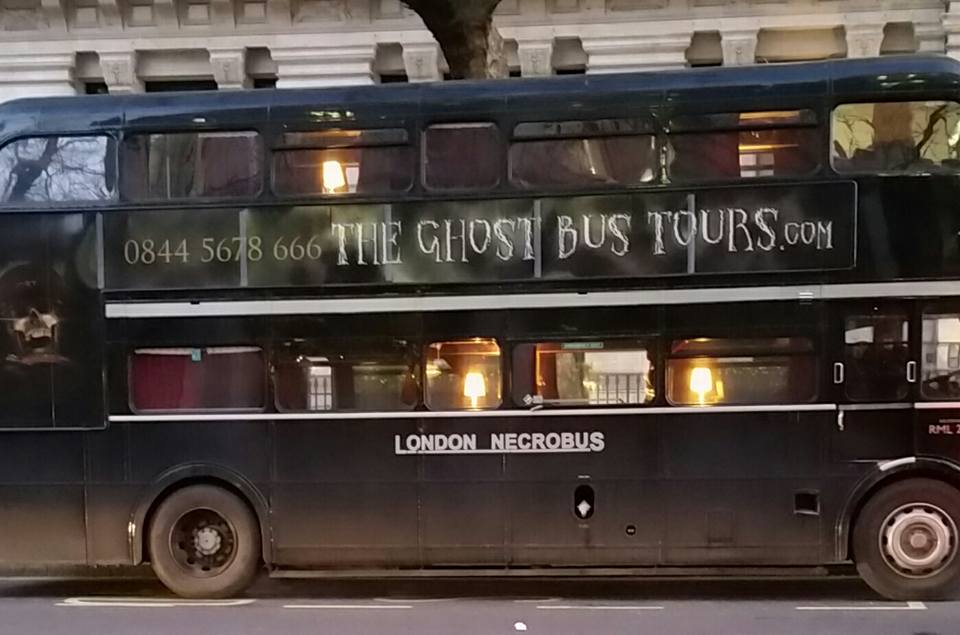 Although the Ghost Bus has been running in London for over four years, the sleek black outline of the old fashioned route-master bus still draws attention from passers by wherever it goes. Maybe it's a romance for the old days of hop on hop off buses, maybe it's the bold lettering down the side or maybe it's the slightly strange looking conductor riding the back plate, seemingly talk to no one in particular (there are hidden cameras connected to screens throughout the bus so we can see what is happening at all times).

The tour starts in the West End and makes its way past a number of famous sites from the Houses of Parliament and Westminster Abbey over to St. Paul's Cathedral and the Tower of London. On the way we stop to see many of the city's sites of murder, torture and execution, and learn about the ghosts of London and the grisly skeletons in the capital's cupboards.

What makes the tour unique compared to other bus tours is the on-board commentary, ongoing story and special effects throughout the bus. Speakers burst to life with thumping sounds, actors invade people's personal space and pre recorded footage is inter-cut with live action to tell a ghostly story of a bus haunted by something strange.

Since our last tour, the story has changed somewhat and now involves a serial killer that was reportedly stalking bus passengers. Amongst the factual and historical stories being told this serial killer plot slightly jars as surely we would have heard of a bus serial killer in the news? At least the previous story of the old lady that died in a fire felt more believable. But of course - who ever let believability get in the way of a good story?

All in, the story, effects, history and acting all combine to make a very entertaining 75 minutes. The show has the right mix of history, humour and tricks  to entertain and we would definitely recommend it if your're in London

Note: The Ghost Bus Tours have recently started operating in Edinburgh - one of Europe's most haunted cities. If anyone is in the area and experiences this new show we would love to hear from you!

Mildly scary - Very disappointed with the tour. Was expecting much more sfx on the bus. Actors become boring and personally couldn't wait for it to end. Not worth the money .

Very scary - best money spent on my visit to london , the bus or should that be necrobus looked the part all dark & mysterious .
once on board the conductor kept us entertained with her knowledge of gruesome deaths , mayhem & murder aided by cctv & health inspector who jumped on/off the bus randomly.
id had my purse stolen just before this tour & was going to pull out of it but i ended up laughing so much my ribs hurt.
if you have 1 bus trip while in london id make sure you catch this one