Thorpe Park were one off the first big venues to celebrate Halloween, and in 2002 they opened Fright Nights to an unsuspecting public. Made up of two mazes created by Lynton V Harris, The Freezer and Freakshow 3D, brought an intensity never seen before to the UK, and the event has continued to develop ever since, with new mazes every few years.

This year sees the fifteenth anniversary of the event (we still can’t believe we have been there every year for the last 15 years) and to celebrate, the park has added their biggest maze ever – the ambitious Platform 15. Alongside this new maze, The Big Top also returns, as well as the three mazes based on the Lionsgate movie franchises. So, how did this year measure up? Would this be the best year yet for Fright Nights? There was only one way to find out - so we went along on VIP night to experience them for ourselves.

The Big Top - We really hate to say this – but The Big Top last year was a real disaster. Despite an impressive location in the park and some interesting ideas, Thorpe’s first take on a clown maze fell really flat. The mix of indoor and outdoor elements never really worked, and some of the circus tent rooms were just TOO big to be as scary and claustrophobic as the park’s other mazes. Therefore, it was nice to see that this year The Big Top has just one large marquee, and has REALLY ramped up the scares and effects. After a (once again) difficult to hear opening scene, the clown strobe maze first half of the maze was a great intense way to throw people into the clown world.- the strobing was some of the strongest we’ve seen in years, and the path seemed to go on forever. We aren’t sure if this was an actual maze element (we seemed to keep splitting up but meeting back again) or whether we were just so confused. Either way – it really brought back memories of the Freezer/Asylum, and brought an intensity back to the park that has been missing recently. The remainder of the maze utilised multiple rooms and effects that gave us a few good jumps, but probably not as much as the opening. If we were designing it, we would have made guests walk the other way around, with the more detailed themed rooms all leading up to a big strobe finale. Either way – this maze was SO much improved over last year!

Saw Alive – this is the oldest maze in the park now and should, by rights, be the least scary. We’ve walked through those corridors loads of times and should know what’s happening – so why did we end up screaming most of the way around? Ever since an amped up version was created for ScareCON 2014, Saw Alive has continued to really deliver the scares EVERY single time, and with the lively actors and dense smoke throughout - this was one of the highlights of the night.

Blair Witch – renamed from The Blair Witch Project due to the newly released sequel movie, Blair Which has seen a lot more trees and undergrowth added to the path (or just allowed to grow up over the off season) Apart from the tress – the attraction remained pretty similar to before, but was really populated with actors, who cleverly used the darkness to their advantage and gave us several loud jumps.  The fog emanating from the final scene was so dense that we struggled to find our way out, which just made it even scarier, when we found out we weren't alone in there! For one of the weaker mazes in the past, we all had a great time in the woods this year.

Cabin in the Woods. With its multiple routes and surprise rooms, Cabin works so much better when you don’t know what to expect. We were lucky enough to have some complete newbies in our group so we left them to try and navigate their way out. Seeing the maze with a fresh pair of eyes – really reminded up how ground breaking this attraction is. Then factor in the very enthusiastic and acrobatic actors, and Cabin gave us a really terrifying experience. (especially as we decided to all split up and so experience most of the second half of the maze on our own!)

Platform 15 uses the park’s old railway line and goes off into parts of the park that have been inaccessible by foot in the past. On a positive note – due to the log flame lake – the area this attraction covers is massive – easily making it the biggest maze in the park. Unfortunately, this also means there are lots of areas where nothing much really happened. In fact, we could easily split the attraction into good and bad segments. The walk to the train, the graveyard and the entrance to the tunnels - good. The path over the bridge, the main tunnel and the finale – bad! The "good" sections were excellent including some detailed storytelling and impressive visuals. We were impressed with the fire elements, and the nostalgic kid in us was pleased to see the return of Thorpe Park Railway (who remembers when you used to catch the train to the farm or onto pirate island?!) But we digress! So after a mass attack in the graveyard – we headed into the tunnels.

The idea of pitch black train tunnels really complements the theme of the whole attraction, but we started to wonder how long they would go on for. With just a couple of scares on the way, we were pleased when we were met by an actor and the story for the final scene was started. Clearly the finale is a standalone triggered effect and built-up to a good crescendo (despite the fact that due to poor guest control – the group behind just wandered in half way through and missed most of what was happening!) And then there was THAT finale – did we blink? Did we miss it? What was it? It really wasn’t clear, and just left us confused. Before we knew it we were out of the exit and wondering what on earth had just happened. It's a real shame – as the rest of the maze had potential and even the pauses in action along the way COULD have been forgiven with a killer ending. As it was - we left the new attraction feeling like the train had broken down and we’d just experienced the rail replacement service!

The final attraction at the park is the upcharge room escape adventure – Containment. Like any puzzle adventure we refuse to give away any spoilers or clues as to what you might encounter inside the facility, but compared to last year, we found this much scarier with the clues and puzzles just a little harder.

As usual – one of the highlights of Fright Nights is experiencing the park in the dark, and it looks spectacular with all the major rides lit up. The darkness also hides the roaming horde who appear to be a mix of characters from the last 15 years of attractions featuring classic mazes such as The Freezer, The Curse and Studio 13, and thy provided some great fun and screams as they attacked people mercilessly.

As one of the UK’s biggest theme park Halloween events, Fright Nights always has a lot to live up to each year and it is clear that the team have put a lot of effort into 2016. We hope that our comments regarding Platform 15 are easy to rectify and if so – this could easily be the strongest year in their 15-year history. Certainly if they continue at this pace – then we will still be visiting them in ANOTHER 15 years! 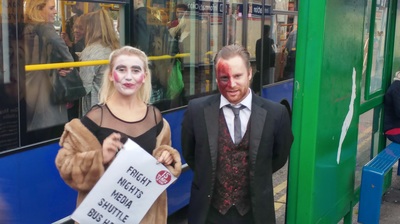 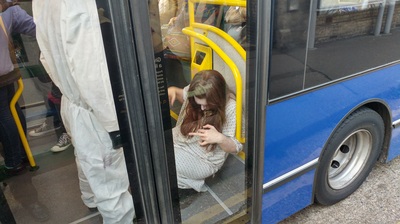 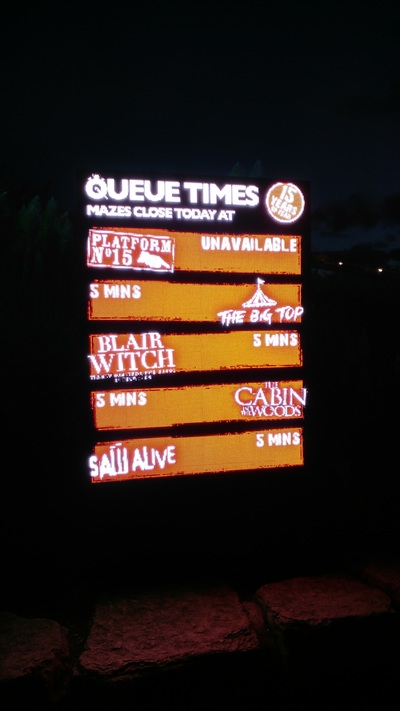 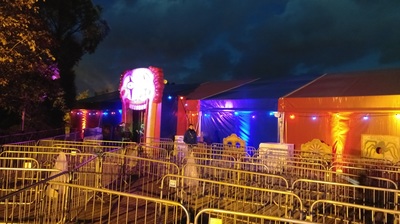 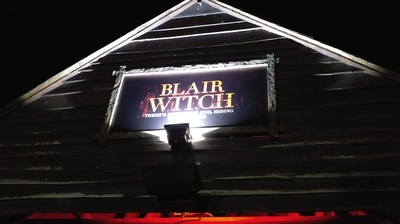 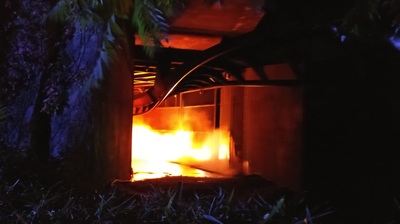 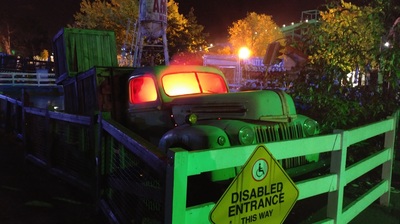 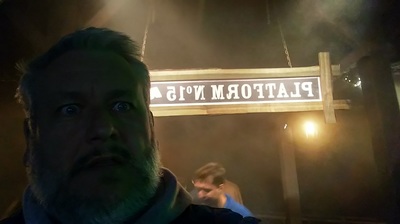 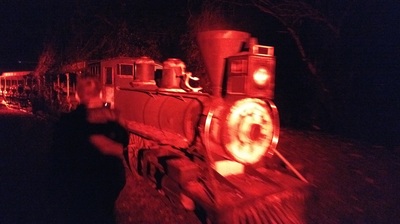 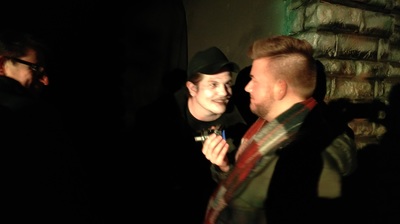 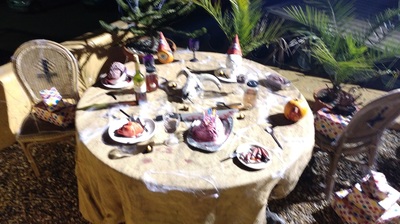 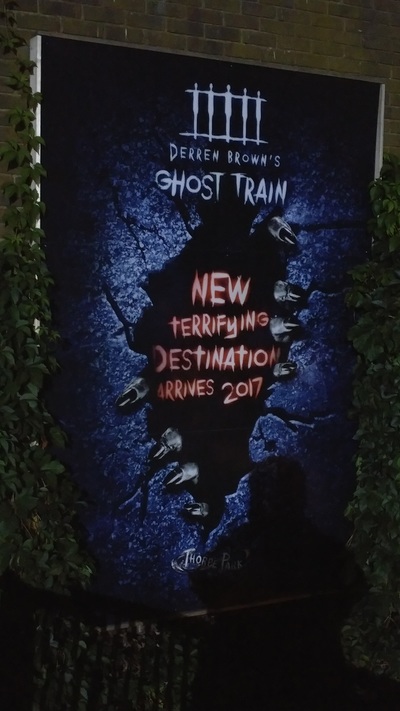 Mildly scary - We arrived and all of the fast track tickets had been sold out. Not one member of staff was dressed up and I only saw one character in the queue. The fright night has been hugely hyped up but was a complete let down in the end. We only managed to get into one of the mazes duevto the 2 hour + wait on each one. But when we did eventually get into the Big Topicture, I must admit was good fun but the rest of the outing was terrible.

Terrifying!
Any other comments? Value for money, entertainment value etc
10/10 would bang
Would you visit again another year?
Yes