Now in its 14th year as the UK’s biggest theme park event, Thorpe Park Fright Nights is back with two new attractions and a return of the Lionsgate branded mazes.

The Big Top is new for this year and on first impressions looks stunning. Thorpe have been criticised in the past for building mazes in large white marquees, so to see that The Big Top is made up of real looking circus tents is a great start. Due to the layout of the beach area where the attraction is built, there is a reasonable length section of the attraction that is outside. The switch from indoors to outside actually adds something to the event but it does feel weird being in an attraction whilst being watched by passers-by on the bridge that crosses the beach!

The maze is also quite large and it’s probably this size that lets the attraction down the most. Compared to the small and narrow corridors of My Bloody Valentine or Cabin in the Woods, The Big Top has some very big open spaces, which means the actors have to work doubly as hard to properly interact with the guests. We are not sure if the first tent is unfinished at the moment, but it is an awfully large space for a theatrical scene that wasn’t remotely scary. Then to be followed by a jump scare that had been signposted to everyone in the queue outside as we could see the actor resetting their scare ready for the next group. A simple path or fencing between the first and 2nd tents would have made the transition more impactful.

After the 2nd outdoor section and the entertaining “Zoltar Speaks” style machine, the attraction really picked up as we walked headlong into a blinding spotlight for the final tent. This tent had more of a switch back path, and a number of interesting hiding places for the lively actors within. A couple of effects were out of sync during our visit, but this being opening night we are sure they will get fixed soon. All too soon we could hear the dull roar of an idling chainsaw and the finale provided a good chance to run out into the night.

We understand that in the run up to opening that the action had suffered some delays, and it is clear that this isn’t quite a fully finished production. But it has great potential and doesn’t deserve the critical drumming that it has received. We actually enjoyed it – but it certainly wasn’t the best maze of the event.

That award has to go to the incredible Cabin in the Woods, which was absolutely rocking on opening night. The actors were some of the liveliest we have seen at Thorpe Park in years, and were throwing themselves around with crazy abandon. We still really enjoy the free flow elements of this maze (we deliberately all went through different doors) and our group got split up so many times throughout the whole experience.

Another maze that was really lively this year was Saw Alive. At ScareCON in June, we were treated to a “special” version of this show which seemed livelier and more populated than normal. Well it would seem the feedback from that has been listened to, as Saw Alive felt really fresh once again. Despite the fact that we have passed through this attraction so many times, we still had some really good scares throughout.

The other returning maze is My Bloody Valentine which has moved to a new area in the park, where it sits nestled in a previously unused plot of land. The location is perfect for a scare attraction as it is out of the way instead of the big packing cartons plonked in the arena that we have seen in the past. The only downside to the new layout is the loss of one of the containers meaning that the opening scenes goes straight into the mines/tunnel, with the walk through the hospital removed. Unfortunately on our run we had a number of actors either resetting themselves or standing talking when we walked into their scene. Normally it would be churlish for us to mention the odd lapse but both groups came out complaining that they had “interrupted staff doing something else. A shame as when the maze is on top form is can be one of the scariest of the event.

As we walked through the final attraction – the Blair Witch Project, we tried to work out if the railway line really had overgrown that much or if some of the trees and bushed were “plants” (pun intended!) Either way – the pathway felt so much tighter than previous years, which meant the actors had more places to hide so we actually had some great scares along the pathway.

Finally – the newest addition to the park is Containment a four room escape experience which is available as an upcharge attraction. There were some issues during press might but we have now experienced the show and were really impressed. We’re not sure if the puzzles were fiendishly hard or if we were just feeling pretty dumb but we struggled through all the rooms trying to find the right combinations to move on!  It didn’t help that all the time we were being hampered by loud and sudden noises, special effects and most notable some very interactive actors. We found sometimes that the urgency to find the clues and hunt the room made us forget about the actors which made it even easier for them to scare us.  It’s a great addition to the line-up and is definitely worth checking out.
​
In summary we have visited Fright Nights at least once a year since 2002 and it’s great to see the event constantly evolving and trying new things.  It’s a shame that The Big Top isn’t quite finished but we aim to return later in the run to see what changes have been made. 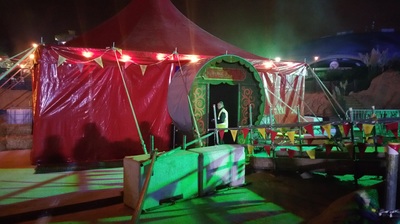 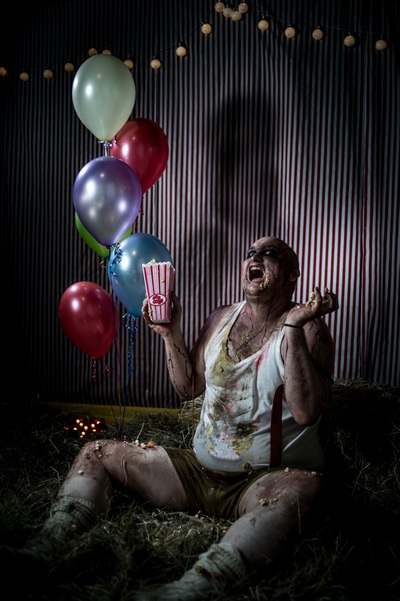 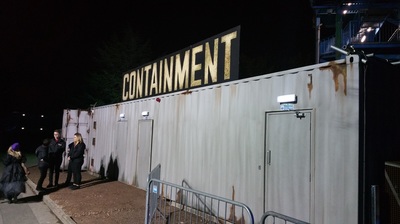 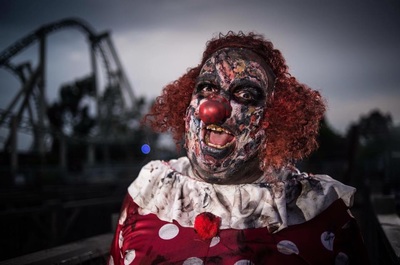 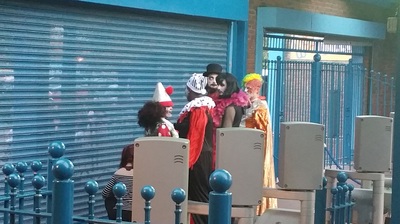 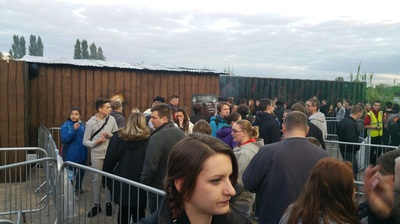 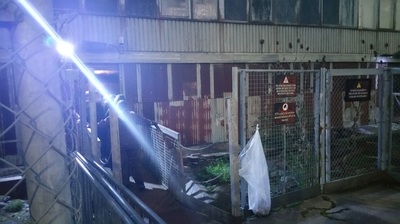 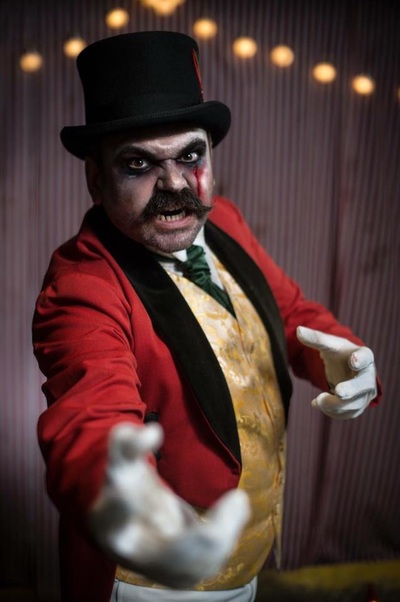 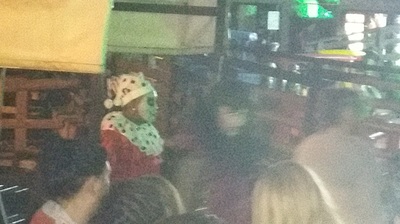 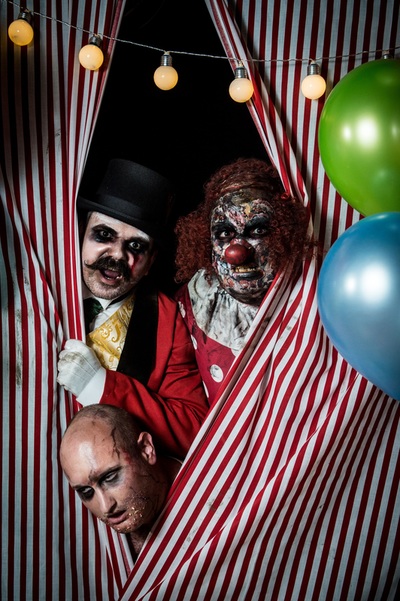 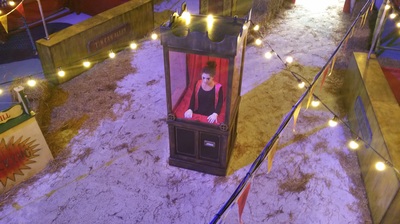 I was expecting more atmosphere; there were no "characters" mingling with the public as we walked around the park. The mazes had the scare factor once you had reached the front of the long queues but each had the same theme of quickly through and leaper style actors giving you that initial jump scare. It would have been good to be subjected to more of a performance now and then, maybe a scene acted out before the audience to add variety to the experience. A real negative was "technical problems" especially queuing for My Bloody Valentine, there was obviously problems as no one went through for about an hour but no one thought it useful to inform the huge queue. Shame it's all about the money and cramming people in...would have been a much better day if numbers where limited.

Sadly Merlin do what they do best get loads of people in get their money and everyone has a lousy fright night. Only thing scary are the queues no time to do any fright night attraction. It would be better if only a certain amount of people were allowed in then you would be able to enjoy.

cary - Fright Nights for me has improved this year,

Big Top: I feel like Big Top is a mixed bag. The first tent is meh, But most of the last two tents provide some good scares.
The chainsaw is a cliched, but a ok ending to a good maze. 6/10

Cabin: Cabin is Thorpe's weapon almost. Cabin is always good-to amazing. This year i saw no Fornicus or the Sugarplum Fairy. Maybe next year they should have most costumes to add variety to the acting costumes. 8/10

BWP: BWP is my favorite of the night. I saw 4 ACTORS in the final budget shed. It was eerie and creepy and it just worked. 9/10

MBV: MBV comes back with NO GAS MASKS.
Its fine it isn't like the MAIN KILLER of the film wears a gas mask or anything.. MBV still has some clasutophobic sections and some liveley actors but no gas masks... 7/10

Went to Fright Nights on 26th October and was pretty impressed! 3rd year doing Fright Nights and this year I had a personal backstage tour of SAW Alive & Cabin which was cool to see behind the scenes. The first maze I did was Big Top and wasn't overly impressed by it on first go round but after visiting it again later in the evening the actors defiantly upped there game! Best actor was the guy playing a clown near the first tent you go through he was crazy!

Bloody Valentine this year was dreadful I'm afraid to say hardly any actors when I went through very empty at times, large groups sent down same corridor and no Harry!

Cabin was good fun as always, felt there was less actors this year but still a good maze!

Didn't really see loads of roaming actors this year but saw a few clowns on there walk about.

SAW ALIVE wins it for me this year as the actors were bloody brilliant! They proper went for it in this attraction and got me terrified for Face It Alone at half 10!

All I can say is Face It Alone It was extreme as hell! I got a bag on my head, had my hands duck tapped together, p*ssed on my head, stripped Yes they stole my shoes, socks, glasses and trousers! Nearly my boxers Aswell! They put. Kinky chocker in my mouth for almost the entire thing, they Spat in my face, put Nutella (fake s*it) on my face, made me crawl, I got dry humped by a female actor on the bed and again later on by a male actor who made me agree I'm a little slut and kept calling me it! Then made to crawl for my freedom and exit in my boxers! Plus much much more happened! All I can say is they really upped there game this year and made this experience really worth the money! Big up to the actors those guys were bloody amazing!