The Sanctuary was one of our favourite mazes of 2012, and so when we reported that it hadn't been taken down at the end of the season, it looked like we would be in for a treat this Spring. With more and more back story and theming elements being released about the new multi looping coaster, The Smiler, the more it became clear that the Sanctuary was just a prelude to something bigger. Both attraction and rollercoaster are linked by the devious Ministry of Joy, in an effort to continue Dr Kelman's experimentation in social behaviour adjustment. After all - he only wants us to smile! What's wrong with that? 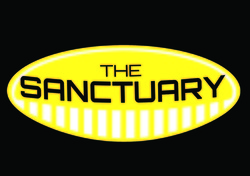 On first appearances - nothing major seems to have changed with The Sanctuary.  The entrance is still in the same place but the queue line can now wind through Her Ladyships Garden without the disruption from the Terror of the Towers queue. Themed music from the 50's era filled the area setting a slightly ominous but welcoming tone. Within the conservatory, the opening scenes remain identical, and strangely the loud background noise that made the opening speech hard to hear at times last year still hasn't been turned down.

Once inside - the experience starts with our encounter with the menacing Dr Kelman himself. Expertly played by actor Gerry Cannell - the character just oozes fake sincerity and charm and seemed even more devious than before. Maybe this is because we now know more about his evil plans and the Ministry, but each time we went through his speeches, ad libs and audience interaction just got darker and darker. From here on in the attraction  follows the same route as previously but with a few room layout changes and some of the effects moved (such as the fireball which is now relocated  to a more obvious location.) It was also a lot darker in the upstairs rooms than it was previously which just gave the actors even more hiding places to attack us from!

The infamous Marmalisation is back in a completely rebuilt set with new videos and effects and remains as delightfully surreal and as bonkers as before! Before long it's time to go downstairs - the one place everyone has been warning us not to go, and this whole section remains a masterpiece of dark maze design with actors appearing from nowhere from some new hidey holes and areas throughout. The biggest change here is the new audio that ties in even more with the Ministry of Joy story, as booming throughout the rooms like a hypnotist's chant is the voice of Dr Kelman, sounding more and more crazy as he demands total surrender to our smile therapy. Its an impressive change to the attraction and helps create a cohesive story from beginning to end.

The actors throughout the maze were completely believable from the crazy patients upstairs through to the mad hospital staff downstairs  Every actor seemed to be even livelier than during Scarefest and the guy climbing the walls in the final scene has to be seen to be believed!

Having  visited the Sanctuary so many times in 2012 we were worried that any changes may not have worked or would ruin something that we already thought was very good. Fortunately we are pleased to report that the new changes and the fresh cast have just made the whole experience even better than before!

The Sanctuary is expected to stay at Alton Towers in the run up to the opening of the new ride in May and will then be removed until Halloween - allowing the towers ruins to be opened to public once again. So if you want to experience the updated show, we suggest you visit Alton Towers soon. The attraction is currently free with park entry and at the moment very few people seem to know its there. On opening day, the queues hardly ever went above 5 minutes - but we are sure this will change once people realise what they are missing out on!
Links:

In Halloween we will be visiting Scarefest again and are already working with the park to arrange another back stage tour or exclusive as we have done the last 2 years. To be put on the waiting list for any new trip announcements - contact us here.

The Sanctuary, what can i say? The actors were very spooky and realistic! And when we entered the kitchen the patient who was the cook, he said to me "Who shall we have to eat? I'll carve them myself." And he stared at me and I said hello and said "what you lookin at?" And He said "you'll do nicely little one." and then I yelled "who you calling little" and he started laughing in a Vaux tone. And I think I had a sign on my head saying 'Interact with me'. Because they wouldn't leave me alone! I'd definitely go back.

This was absolutely terrifying because people kept going in your faces and telling you disturbing things, for example, when we went into the kitchen, one of the patients said to me 'You, you, you!!!! You'll do nicely...' and I had my eyes closed for a while, so I heard a girl on my left screaming 'Look at me!! Why won't you look at me!?'. There was even a dead body and I thought it was going to come alive! And also in the beginning there was a patient in a hoodie running like a monkey, somehow. The security at the front and back made me the slightest bit better. Al in all it was the scariest thing I've ever experienced, because at the end I was shaking, my mum said during it she wanted to get out, as well as my friend elbowing a patient in the face cause he was being way too close. A shame it's closed though...

Scary! - LOVED IT !!! The actors were great, the scenery awesome.... if you get the chance check this out you will not be disappointed

Have you also visited The Sanctuary? Why not leave us a review? Click here for more details.