Following plenty of story telling and scripted scares in 2011,  Scare Kingdom promised something very different for Halloween 2012. Previously voted 'UK's number 1 scream park'  and with four brand new attractions advertised, we were eager to experience the terror. With an enticing website and gut wrenching internet trailer, 'Full on Fear' was the new tagline while the marketing promised 'Hell on Earth' with the face of LuciFEAR and his Heraldemons appearing everywhere. . So how did they do?
Once parked up at Hawkshaw Farm Park we were greeted by a haggard old witch, in a well themed reception area. The mood lighting and atmospheric sound track made us feel right at home and  the witches kept in great character whilst greeting all guests. We didn't spend very long here, so we must commend Scare Kingdom for their 'no queues' promise, as we walked straight into reception and were thrown head first into the action of the pre-show.

The pre-show explained the usual health and safety rules that we've all heard before but did it in a more entertaining way, with great use of music, projection, smoke and lighting. The effects really helped build the tension.

On exiting the pre-show building it was a short walk to our first attraction. With extensive outdoor theming and a great welcome by our first character we where made to feel quite on edge from the very beginning.

During our venture through the scare zone, we had a distinct feeling of being in the out-back. With some nice impact scares and great use of props, it was as if we had been thrown into the horror movie 'Wrong Turn'. The lack of sound track and use of minimalistic lighting and effects, made the experience feel even more realistic and therefore more unnerving. 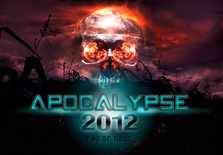 After a tediously long walk through empty fields after Inbreeds, we where greeted by a character who proceeded to reiterate the rules of hands on shoulders which felt unneeded. He did however go into short detail of a war plot which helped us realise we where now in our next attraction.

We were however, extremely unimpressed with Apocalypse 2012 as we made our way through what looked like an auto trader scrap yard that wasn't used to its full potential. The team were lucky enough to source various cars and even a double decker bus which looked amazing but wasn't used to its full potential. The walk through various barns with building site fencing were not exactly atmospheric and we felt that the scares within this area could have been improved with more actors.

The Theatre of Gore Guignol 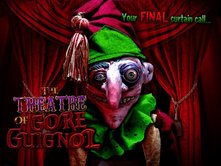 Whilst walking from Apocalypse 2012 to the next attraction, any atmosphere  that the group felt was lost completely when we could both see and hear the Waltzer fun fair ride. Although we realise this isn't directly Scare Kingdoms fault we did feel that Sisqo's Thong Song wasn't really the type of track we wanted to listen to after surviving an Apocalypse!

Once we had been greeted and ushered into the maze we found the opening 2 characters were talking over each other, therefore it was quite difficult to understand what either character was saying. This made the the beginning of the maze more confusing than exciting. Unfortunately, this maze is easily forgettable  With small corridors and space for actors, the only scares were delivered to the lucky three guests at the front of our conga line. Those of us tagging along at the back were left confused as to what the people in front had screamed at. 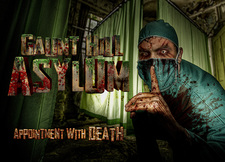 After a slightly boring ending to Theatre of Gore Guignol, it was a nice surprise to only have a very short walk until our next attraction. This is where the dynamics of the group where changed when we were split into two groups. This made for a more exciting experience whilst inside the maze, although being in the second group, we where left hanging around with with nothing to do while we waited. What happened to the No queues policy?

Once in the maze however, we where not disappointed as with an enthusiastic opening scenes we instantly felt like we were in an asylum. With great use of lighting, moments of darkness, claustrophobic areas and perfect theming the maze had all the right elements to get great scares. The actors were on top form within this maze and delivered scares constantly and consistently. With fantastic use of different levels throughout we never knew where the next scare was coming from and the variety of scares in this maze must be commended. The Gaunt Hill Asylum had us on edge throughout with a simple yet effective finale and was easily the best attraction on the site.
So, having survived all four attractions, did Scare Kingdom deliver 'Full on Fear' like it promised? Unfortunately the answer would have to be "no". Although the event has an impressive beginning and end we felt the middle sections fell flat with not a lot going on. The overall experience didn't live up to the marketing promises and the noticeable absence of all the key characters such as LuciFEAR made us question why he fore-fronted the advertising campaign in the first place.

We did however enjoy our visit and we understand that like lots of attractions this year, there have been issues with the corn. Therefore some of the obvious sight issues and lack of atmosphere between the attractions are probably out of the park's control, which is a shame.
Scare Kingdom is open every weekend until Saturday November 3rd and everyday from October 24th to 31st

A brilliant start to the park, the crazy witch on arrival never left character once, and was amusing, cooky, and scary, as was the figure in the holding room, and masters introduction was impressive. But it set expectations high, and as we stepped into the dark and set on our journey around the park...the expectations and the fear began to slip away and what followed was a roller coaster where the park fough to lift and scare you after a too long journey in teh pitch dark between mazes, across a piece of too big farmland. stumbling about in the dark, trudging through mud, really didnt add to the fear. I felt they then had to work overly hard in a very short period of time to reinject the fear. Result of which was that what could/should have been utterly brilliant, (ie the chainsaw scene), became just ok, because you were "down" stumbling in the dark, for too long prior. Dont get me wronng - some of the mazes were intrically detailed and very well acted,versus some such as the bus, and the army tent which were just lame. i got the feeling theyd spent too much time creating buildings /rather than creating internal effects/fear...but then set building (abandoned cars and busses) was brilliant - had it been lit and could be seen.... there were also some very blatant copies from permanant mazes, and an over reliance on strobe lighting and smoke effects. The actors were brilliant in their own right, and make up was exceptional, when there was light enough to see it...But A few more actors, linking mazes would have kept you in the fear zone a littel more.Overall a moderate scare, with a few genius moments, spoilt by the overall unoriginal feel. Sadly, i doubt id go back next year unless it was on my doorstep.. and they hired in a few more generators and actors.... and they laid some walkways......

i agree with you comments, we visited on the first night (Saturday) we were terrified with the first scare in the wood shack, some weird pig type thing, some members of our group actually froze to the spot when faced with it, the rest of the family were great with some great interaction between them, the walk to the second attraction was long, maybe it should have been broken up with other characters. the scrap yard was well put together but lacked and real scare factor and wandering around the farm outbuildings seemed unnecessary, i know this may not be their fault as the corn maze that was there last year was not present due to our british summer, the next one was well acted in parts but lacked a big scare too, last year we visited the park and the last scene was the same but no where as scary as last year, we actually ran out last year in fear, this year we just walked, last but not least the asylum, jeez these guys have some sick ideas :-) we loved it, the variety of scares was brilliant, and the quality of costumes and effects were really good, lets not forget what awaits you when you exit the last part, lets just say it was needed.

Very bad value for money. We have been in 2010 and 2011 and this year it has gone downhill. When we expressed our feelings we were not taken seriously and only kept being told how others had enjoyed it and been scared.

Have you also visited Scare Kingdom? Why not leave us a review? Click here for more details.