Scare Kingdom is one of the biggest names when it comes to haunted attractions in the north of the country, but one we hadn't experienced until this year. The lineup of attractions, marketing and web design are some of the best around but would the actual event live up to it's slick marketing? 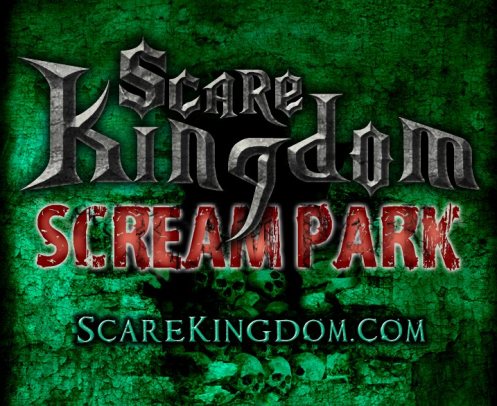 On arrival, initial signs seemed positive. Before even getting to the ticket desk we had passed several funfair rides which not only seemed popular with the punters, but also added perfectly to the mood. A roaming actress was also lurking in the shadows taking great pleasure in jumping out on the unsuspecting public.

In the batching area we were met by Helga, our deranged host for the evening, who after various insults and barbs reluctantly posed for a picture with us. Helga was one of our favourite characters from the night as although she didn't really give us scares, she really worked the crowd giving everyone equal attention and providing a few laughs at others expense along the way. Our journey continued and we were met by Bloody Mary (after several chants of her name) who in turn introduced us to Lucifear's Mirror. The interaction between actress and mirror (video screen) worked seamlessly and was a nice variation from the usual front end read-through of the rules we often see.

From here on in we were on our own as we crept into the darkness outside. The way Scare Kingdom is set out is interesting; rather than be a free for all, with you choosing which attraction you wish to experience in which order, there is only one route through. The great thing is that this means minimal queueing at each maze. The scares start off fairly calmly with just a single roaming actor and with each maze under your belt the fear factor increases gradually bit by bit.

Our first haunt came in the form of Voodoo Bayou, an extremely long corn maze which is interestingly set in the swamps of Louisianna. The rain had taken it's toll on the field and the mud in places was particularly deep, but somehow it all added to the effect (although we'd seriously recommend investing in a pair of wellies if you're planning to visit). The rows of corn went on for what seemed like forever as we made our way between scenes. When we finally met each actor, they seemed to have a strong dialogue led part which neither felt hurried nor stale. At no point during our trip did we meet any other group in the corn. The finale was hampered slightly due to the conditions in the field. Rather than being a high impact chainsaw chase from the evil Baron Samedi we were left shuffling through the mud cautiously. Despite this we were followed relentlessly as the actor circled us mercilessly making the best of a bad situation.

No sooner had we left one corn maze but we were in yet another. Day Of The Dead: Festival Of Phantoms was a maze based on the Mexican Dias De Los Muertos celebrations. The attention to detail of each scene was impressive, although we'd have liked to have seen the lighting raised a little from the position on the floor. Very often it meant that us spectators were casting shadows on both the actors, fantastic costumes and scenery which we'd have loved to have seen a little more of. For us this felt like the weakest of the mazes in terms of scares but the theme and acting style meant that it was still great fun to experience. The finale featured an impressive character who's insides were left hanging high above our heads. He acted as the finale and told us we had till the count of ten to leave which had everyone scrambling for the exit, but it felt like it needed one last scare near the exit to really get our pulses racing.
Glad to be out of the darkness and muddiness of the corn, our journey continued and we arrived at HMS Hell, a small but well designed maze centered around the remains of a ship lost in the Bermuda triangle. Once inside you would find it hard to tell that you were in two humble shipping containers. The set design is immaculate, corridors are extremely tight  forcing you within inches of the ships inhabitants. Each scene is noticeably different and themed in such a way that you really do feel like you're on a journey as you make your way through. It's impressive that they've managed to cram so much into such a small footprint.

Our final stop was at Blood Bath II, which we were warned would be the most intense maze of the lot as actors would be able touch us. True to their word Scare Kingdom delivered the scares time and time again. Very often the touching in mazes is quite restricted and tentative, and although it wasn't aggressive, it was quite forceful. At one point we were followed through a tunnel by an actor who wouldn't stop grabbing at one of our groups ankles! There's some great uses of diversion scares and some really well thought out scenes. The finale was well excecuted, claustrophobic and  intense. Needless to say we were left running for the door.

Scare Kingdom is a solid attraction that has a diverse mix of haunts but seems to forego impact scares for more script based scenes. Although these scenes immersify you and create a rounded feeling to the attraction many of them don't actually scare you. Each character however, feels integral to the plot rather than just filling the mazes with generic monsters for the sake of it. Lastly, even though we visited on one of the last nights that they were open, the mazes and actors felt fresh, like they'd only been open a couple of days, not like they'd been reading from the same script for the past month.

We look forward to seeing what AtmosFEAR! Entertainment Group come up with for Scare Kingdom in 2012.
To find out more about - visit their website

On the evening of Thursday 27th October I ventured out to visit Scare Kingdom for the second time, after visiting the unforgettable 2010 event last year (which I had been recommending to all my friends and family and been fiercely enthusiastic about). Therefore, in all honesty, I will admit I had very high expectations for SK this year. And, unfortunately, I must report from my experience, things seemed to have gone a bit downhill since last year.

The queuing system was very disorganised. Groups were catching up on each other; and at one point during the Dia De Los Muertos cornfield attraction our group had grown into a collaboration of about 40 people. When waiting for entry into Voodoo Bayou in our initial group of six, a group of twelve people with quite a number of young children (one as young as about five years old) joined our group, which I thought brought down the tone of what was previously classed as a more adult scare attraction. Though those were my only two main complaints, they really did manage to bring down the evening as a whole, especially in the first three attractions (Voodoo Bayou, Day of the Dead and HMS Hell). However I think the main problem was crucially in the group size, as it completely stopped anyone at from really experiencing what was going on.

In my opinion, the second corn maze was not needed, & it seemed to emphasise how the entire event seemed to be very much toned down in scares, which a friend of mine who visited a few days prior to me, confirmed with the same sort of opinion in that there was a lack of scares throughout. Last year's Unhallowed Hill corn field maze was a fantastic part of Scare Kingdom and I was sad not to see it making a return visit.

Being on a negative slant so far, I shall say Blood Bath just managed to rescue Scare Kingdom 2011 from being completely less than what I expected. During Blood Bath, our group was still oversized, but I will say that actor interaction was miles better than the first three attractions. This was definitely the scariest part & the the general theming, presence of scare actors and costumes seemed to reflect that. Another part of Scare Kingdom I did also like was the inclusion of street theatre character Crazy Mavey (which also provided a photo opportunity), and a few more additions outside the entrance such as a short ghost train and dodgems.

My overall verdict is - better system for managing the queues & groups are needed, so such an incident will not occur again - the groups accumulating ruined the experience for everybody. The queuing system for last year's event was excellent, so perhaps reverting back to what worked last year would be a good idea? Clearer definition is needed on who this event is now being aimed at, since young children are being admitted later on at night, despite there also being a day event specifically aimed at young children.
Whether this was just an off night, I really do not know, but I have left feeling slightly less hopeful & thinking more along the lines of not making a return visit if SK is now being aimed at a younger audience.

Also visited Scare Kingdom? - tell us what you thought here