Now in its fourth year, PrimEVIL at Norfolk Dinosaur Park returns with an exciting line up, which includes a mix of new mazes and returning favourites. Set in an existing theme park structure, PrimEVIL always feels more complete than most Halloween scream parks with proper catering, toilets and an infrastructure to support the crowds. We went went along on a busy Halloween night to see what was new for 2013:

Screaming Woods is the new name for the park's original Halloween attraction, Dino Haunts and is a long walk through the darkened dinosaur trail. The pathway winds down from the main event arena and back up through some very dark woodland. Along the way there were a number of scenes and hiding places where actors were lurking ready to pounce. The unique element of this attraction is the actual woods themselves. The overhanging branches block out any moonlight so when an effect or a light suddenly switches on it had most of the group jumping. The anticipation that something would appear out of the dark was quite overpowering at times and the scares came thick and fast throughout this attraction - it certainly seemed that there were actors everywhere!

Last year we were really impressed with The Dark. It was (not surprisingly) very dark inside and we were left alone to try and follow a rope around a confusing maze of obstacles and walls. Last time we led the group which was pretty terrifying (as we kept bumping into walls) but this year it was even more scary being at the back of the group. At the back we were just following the person in front and felt completely helpless as we shuffled through the darkness looking for our way out. The Dark is such a simple concept but it is genuinely scary as the anticipation of who or what might be in the dark with us left us all desperate to get out (which can take a while as this maze seemed to go on forever!)

The Maze of Mutants was last seen at the park in 2010 and the family from America's deep south have moved back to Norfolk. It would seem that Papa is still up to his twisted ways, and as before, the maze expertly balanced twisted humour with horror. Set in a wooded eerie area of the park, the show is more theatrical than some of the others as there aren't that many obvious hiding places for the actors. This means that they have more chance to improvise and interact with guests as they are making their way through. As usual, the detail of the costumes and make up alongside the skilful actors meant the characters in this attraction were completely believable (in a twisted way). A great fun attraction, livened up by the incredible actors. 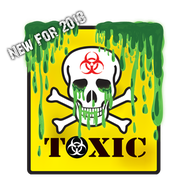 Toxic is new for this year and the story behind the maze is that there has been a toxic waste spillage and we required to go in to investigate the after effects. The actors were realistic and suitably deranged, and the atmpsphere was maintained throughout with realistic sets, sensory smells, original music and different textured props. To ensure we got the maximum effect within the attraction, the groups were staggered appropriately, giving us the chance to fully enjoy the story and the acting talent within. As with all the other mazes we had a number of good screams in here (especially as the maze was new so we had no idea what to expect) All in, a thoroughly enjoyable maze with some fun scares.

We've said it before but the - there's nothing new about The Insanitorium. It's an asylum themed maze full of strobes, smoke and metal fences. But what works so well is that this maze has some specific rooms, unusual  hiding places and some really great jump scares. This combined with the thumping soundtrack, the dense fog and the incredibly enthusiastic actors throughout, make this the most high energy maze of the event. Interestingly - this is the maze that the local press seem to have had an issue with, but on the night we visited, it was clearly the most popular attraction. Certainly, everyone was laughing as they came out and we are pleased that the park stuck to their guns and didn't bow down to pressure to remove it.
What we have always liked about PrimEVILis that all the mazes are very different in style. Insanitorium is high energy and intense while the Screaming Woods are more lengthy and considered. In between, you have the theatrics of the Maze of Mutants and the darkness of The Dark. Many parks just seem to create 4 or 5 "different" mazes that all follow the same sort of scare pattern, but PrimEVIL have clearly thought about their offering and have presented something that should appeal to all tastes.

Across the whole night we had a great time and all of the attractions left our adrenaline pumping in different ways. All the actors we saw throughout were extremely enthusiastic and everyone was giving solid and realistic performances. We could even see that at times they were being spontaneous and having fun with the audience as opposed to just sticking to a set script or scare pattern. Also the wandering actors were excellent, especially as they entertained us in the queue-lines. From a zombie bridal party through to a whole Gangnam Style flashmob, their make up and costumes were impressive and we enjoyed their antics.

PrimEVIL is an event that so often gets overlooked due to its location, which is a real shame as the owners have put a lot of effort into giving the guests a scary and fun experience . Each year it keeps getting stronger and stronger and we look forward to seeing what 2014 brings!

For more details about PrimEVIL or Norfolk Dinosaur park check out their website - www.primevil-scare.com/