We have never failed to have a good run through Pasaje del Terror in Blackpool. The show really just keeps going from strength to strength, and has recently celebrated its 20th year at the Pleasure Beach. This year was looking promising - and then Covid happened, and like most attractions, the experience was forced to close and then eventually found a way to survive once restrictions were lifted.

Fortunately for us - the changes that were forced on the attraction, have made it even scarier than it was originally. This is due to the smaller batching and social distancing required throughout. Whereas we would normally be batched with some strangers and forced to all follow the "hands on shoulders" routine, we experienced the show as a small free flow group of 2, and this made for one of the most intense run throughs we have ever had.

The scares came thick and fast throughout all the scenes, and there were multiple actors clearly relishing the chance to scare us witless. As a group of 2, this meant that we both experienced multiple scares in the mazes, as the actors could focus on us as individuals, instead of having to work a whole line of guests. Scares came from all angles, and as we weren't holding on like a conga line, it felt far more personal and intimate.

Of course, we have always been big fans of the elaborate theming and effects in Pasaje, and none of these disappointed. By being in a smaller group, it was easier to enjoy the atmosphere and ambience of each room, and feel immersed in a more personal horror experience. We are still in awe of the horror movie "tribute store" scene, and would love to spend more time in there just to check out all the references.

All in - we had a genuinely fun time, and the staff and front of house teams were as fun and engaging as you would hope.
We're not really sure what will happen once Covid is over, but Pasaje del Terror have really made the best of a bad situation, and we would love to think that they keep the small batches going forward, as it just makes the event even scarier!

We have mentioned this before, but our first ever scare attraction was Terror on Church St in Orlando. The experience completely changed us as it started a love for scare entertainment that was the main genesis for everything we have done since, including ScareTOUR and ScareCON. In 1998, when Blackpool Pleasure Beach announced they were bringing the iconic attraction to the UK, we were delighted, and it is hard to believe that the experience celebrated its 20th birthday last year.

On a recent visit to Blackpool, we popped in for a quick fright and, as expected – had a truly terrifying experience peppered with multiple screams. We were fortunate to be batched with a group of very nervous teens, so we had just as much fun being scared as we did watching their reactions. In one of the earlier scenes, one poor girl jumped so much that her flip flop fell off and as he friends pushed her forward, all we could hear was the shouts of “I’ve lost my shoe”

Fortunately for her the actors were able to get it back to her within a few scenes, but the way they did it was totally in character. In fact so much so that the girl was afraid to actually take it from them, as she thought they were going to scare her more!

The main show remains pretty much similar to previous, but we did find the small speech/delay in the horror movie prop shop, paid dividends so you can actually appreciate the attention to detail and the small touches throughout the room.

For an attraction that is twenty years old – we are always amazed at how fresh Pasaje del Terror feels, and how much we enjoy it every time. Unlike some other attractions in the area (Strangest Things we are looking at you!) – it is totally worth a visit and we look forward to heading through again when we head back to the resort over Halloween.

It’s hard to believe that Pasaje del Terror has been scaring visitors to Blackpool Please Beach for the last 20 years. Our first ever scare attraction was its sister - Terror On Church St in '97, so we were excited when it was announced that we would be getting our own version in the UK. We visited in April 98, when it first opened, and although we have been back many times since then, we knew we had to make the pilgrimage to Blackpool for their 20th birthday party!

One of the enduring successes of the Pasaje brand is the tendency to update movie references over the years. Yes, it has kept some of the classic scares from The Exorcist and a Nightmare on Elm Street, but more current additions have included whole rooms inspired by the Conjuring universe. This will become even more relevant with the release of The Nun later this year.

But to celebrate their 20th anniversary, the Pasaje knew they had to do something very special and so a brand-new room has been created that lovingly pays homage to all horror movies throughout the years. This room is packed with so many horror references that it’s hard to take it all in. Every inch of the room is covered with props, pictures, easter eggs and more. Even on a return visit we were still taking in loads of the detail and we are sure we still missed a load.

Of course, in the middle of all this- they still managed to scare us especially with the arrival of an iconic “victim” from the recent adaption of Stephen King’s It!

And this is what the Pasaje excel at – drawing you into an immersive realistic looking environment and then scaring the crap out of you when you aren’t expecting it. The actors are as lively as they have ever been, and our whole group was bouncing off the walls as the scares were directed all down the line. Unlike some attractions that just scare to the front or the back of a group- no-one was safe and we all screamed multiple times on our visits.

It really is a testament to their scary skills that the attraction has endured so long and terrified so many people over the years. If we can still get scared with having been through it multiple times since 1998, how terrifying must it be for someone coming in completely unknowing?

So, there we have it - Pasaje were one of the first big scare attractions to hit the UK and have remained ahead of the game ever since. If you haven’t been recently then you must go again – the new scenes (including a beautifully haunting new opening) along with the talented cast and crew all add up to make an unmissable experience.
​
Happy Anniversary Pasaje del Terror – here’s to another 20 more! 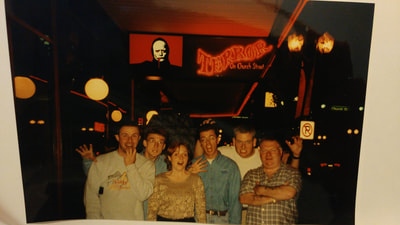 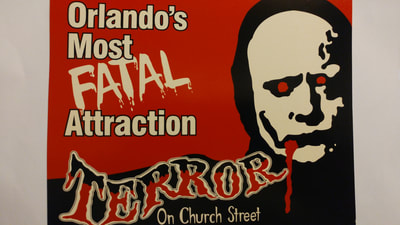 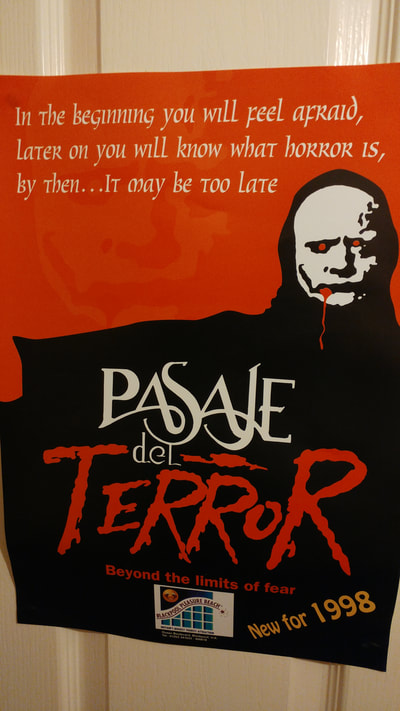 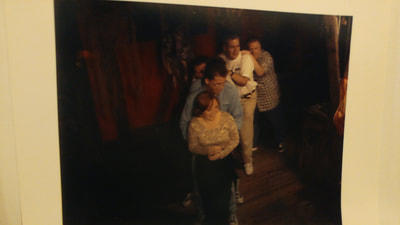 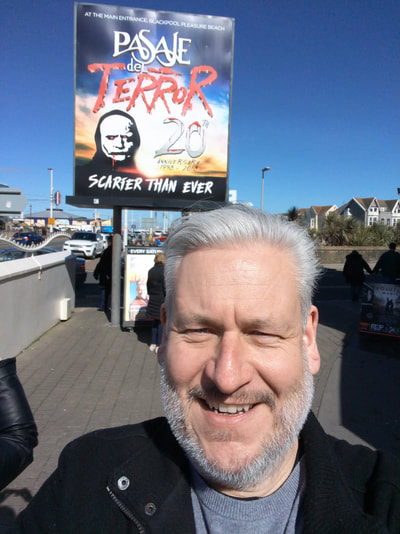 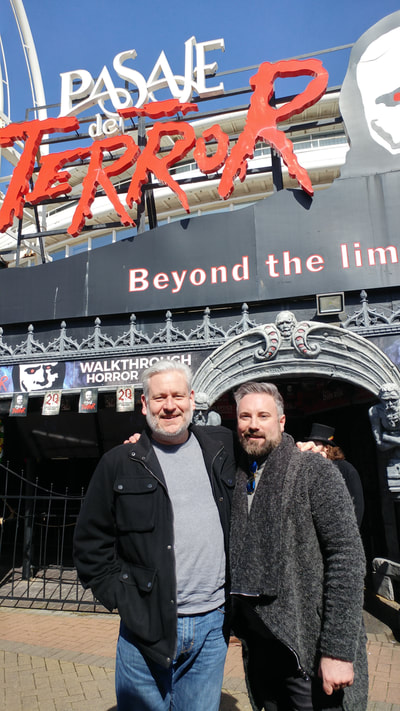 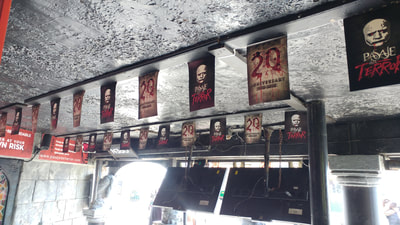 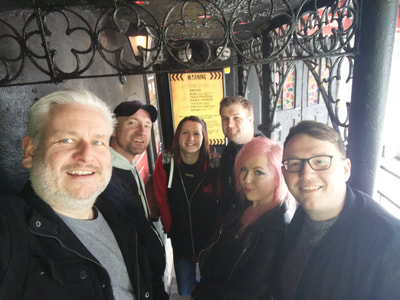 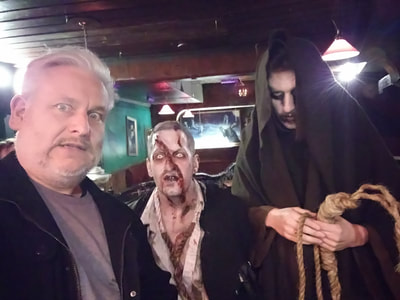 ​Terrifying!
Its been 20 years since I last visited Pasaej del terror, last terrifying me when I was a child. Going in I was extremely nervous as I remember how scary it was at such a young age and wondered how well it had aged and if it still had the power to shock like it did all those years ago. It most definitely didn't disappoint and its clear why the attraction had stood the test of time. Probably only niggle is that it hasn't changed an awful lot, I was expecting a lot of new scenes, but the exorcist scene and Freddie still shocked me like they did all those years ago so this isn't necessarily a bad thing! The scenes were breathtakingly detailed and there was too much to take in in such a small amount of time, I almost wish I could do a lights on tour to truly appreciate the detail. This truly is something worth visiting as many people still haven't visited it who I speak too, despite being situated on Blackpool seafront for over 20 years! Pasaje will always hold a place in my heart and introduced me to the world of scare mazes, and still remains one of the best scare attractions in the world. Here's to the next 20 years!

Pasaje Del Terror has always been one of our highlights when visiting Blackpool so we were eager to see what changes had been made for this year. Upon arrival there were 2 roaming characters outside of the main building entrance talking to the potential customers at the Pleasure Beach. The characters were  quite impressive in their red and black capes and detailed makeup and were doing a great job interacting with he crowds.

We purchased our tickets and were told to wait in line for further instructions. The ever impressive façade now looking particularly good as it has recently been painted and makes a great start to the attraction. We were joined by another 2 people in the queue then asked to go down the stairs and wait at the curtain. This was an opportunity for the first jump scare that was excellently executed. A very simple fast curtain opening with foot stomp where the first character explained the rules of the attraction. We were then asked to go down further stairs and knock on the door three times; this was the start of out journey through the Pasaje..

The descent really sets the tone for what’s coming and really gives the impression of going underground. We were greeted by a Monk type character that creepily explained we were about to meet many creatures and ghouls inside. Along the journey we encountered characters with impressively detailed scenes, some from commercial horror such as Freddie Kruger and the newly added Saw through to generic scenes involving clowns, vampires etc. We had a number of good jumps throughout, including one excellent distraction scare where we were so focused on the clown feet hidden behind a curtain, that we didn't see the real scare waiting to pounce!

Overall we felt there have been quite a few improvements since our last visit and all the actors were on top form throughout the whole experience. We're just thinking that as the event approaches its 20th anniversary in 2018, it may be time to replace or change some of the sets and characters with more up to date scenes and really bring the Pasaje del Terror kicking and screaming into the present! 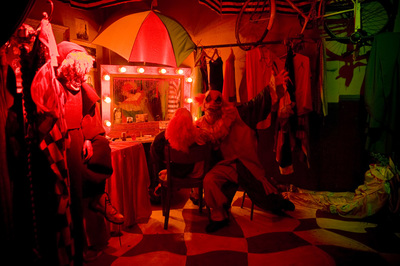 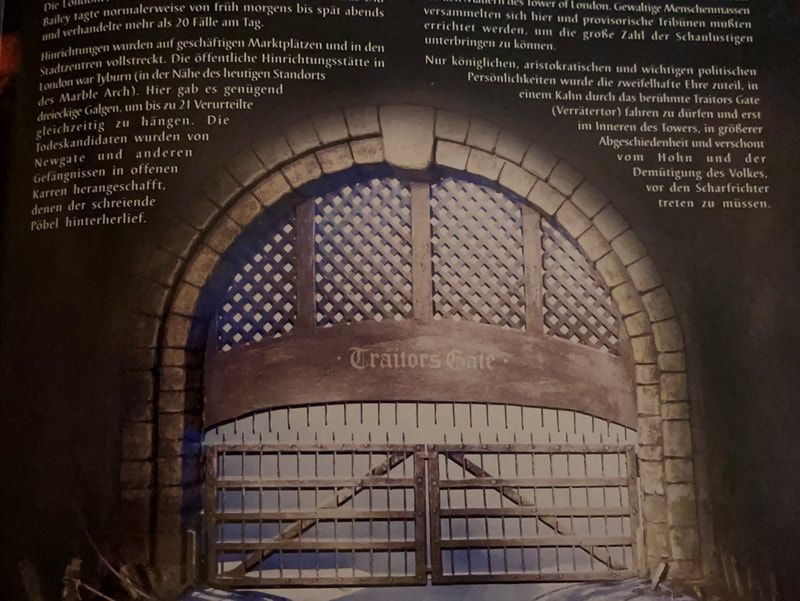 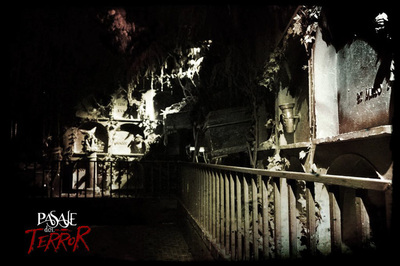 Terrifying - Brilliant value for money..extremely terrifying!! Don't want to give too much away but seriously we were all left shaking at the end even the bravest of our group who thought it looked pathetic was proven wrong and glad she participated. I lost both my shoes with jumping and running at some parts wasn't meant to run but fear kicked in took over!!! I got my shoes back!!