﻿﻿The Edinburgh Fringe Festival is one of the World’s biggest arts festival and every year seems to get bigger and better, with a hugely diverse line up of shows and events. The Generation of Z , which has recently completed a run in London, was the must see show last year and really drew attention from horror fans and festival goers alike.

Also new last year – the Edinburgh Dungeon joined in the festival fun by creating an interactive murder mystery event that runs after the normal show.  The show is back for 2015 and being big fans of the normal Edinburgh show, we went along to see the changes.

﻿Compared to the other Dungeons, Edinburgh starts with the court scene and so the story was set up as we were ushered into the presence of the dreaded Judge Mental. Within the courtroom, the intimidating judge and his crazy clerk were faced with an array of 'Scottish scoundrels' including Sawney Bean and his daughter Bonnie, the green lady, Ruby Red and Turnbull the torturer - each providing a bribe to avoid sentencing or torture. However, on leaving court the judge quickly met his demise- leaving all of the above as credible suspects.

We were then made honorary detectives in an attempt to gain evidence and find the murderer. From there on in, we toured through the remaining elements of the Dungeons.  Beginning with Turnbulls torture chamber and his many devices, leading on to Ruby Red before boarding a bleak, dark boat ride to the cave dwellings of the Bean family. We then stopped in at the haunted home of the green lady, sat in Greyfriars graveyard with Burke and Hare and finally were sentenced to death by the hangman. The drop ride leaving some of the guests a little shaken by the experience!

Our finale took us back to the start where we were able to share the evidence we had gathered along the way and gave us chance to conclude who was guilty of murder.  But in true Dungeon’s style, there was one last surprise waiting for us as the actual murderer finally revealed themselves!

The whole show was a very different and amusing way to present the usual Dungeon experience. Although the shows and rooms were similar to before, we paid close attention as we tried to pick up any extra clues along the way.

The actors were all as lively as usual and the scares and shocks were prevalent throughout the experience. We have often said that Edinburgh is one of the scariest dungeon attractions and it was good to see that these elements including darkness and some great jump scares made it into the new show.

If you’re in Edinburgh for the Fringe festival you will be bombarded with things to see and do and it would be very easy to overlook this new show, which would be a crime – as it really is a fun and scary way to pass an hour or 2. 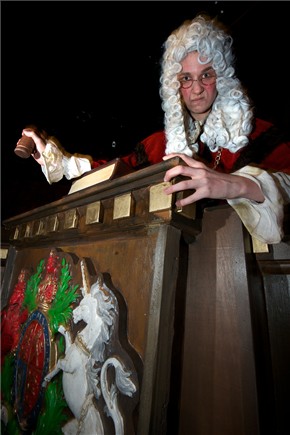