Mt. Fuji is an incredibly important part of Japan's culture. On a clear day, the great mountain can be seen from Tokyo, an ever-present sentinel over the city. It has a rich tradition of spiritual importance and its abundance of hot springs have made it the perfect location for Japan's onsens. It attracts visitors from all across to world looking to climb the path to the volcano's crater and to visit the many attractive tourist hotspots on and around the mountain – including Fuji-Q Highland, a popular amusement park sat near the north base of Fuji.

Fuji-Q is home to record-breaking rollercoasters (including Dodonpa, the world's fastest accelerating coaster at the time of writing), various interesting and themed attractions (such as the “Ultimate Fort”, a maze boasting a successful escape rate of 1 in 100000 guests), and – of course – the infamous “Haunted Hospital”, billed as the world's second longest haunted attraction (at least discounting haunted hayride-style). Note that the longest as recognised by Guiness World Records – the Cutting Edge Haunted House, Texas – is not a year-round attraction.

The Hospital is nestled towards the back of the park and a little difficult to locate; though the attraction is tall, it is largely hidden by trees and easily mistaken for the above-mentioned Ultimate Fort (in fact, the Fort sports a sign clarifying to visitors that it is not the Haunted Hospital). Eventually, though, we find the crumbling grey façade of the hotel – fenced off with barbed wire, completed with warning signs and scaffolding. Upon the roof are perched ominous crows and the figure of a young child, peeking down from behind the Hospital's sign at us as we queue to enter.

There are plenty of signs detailing the attraction's rules – along with an amusing informative video – and they are the expected affair for scare attractions: no touching, filming or photography, and group sizes are carefully controlled with access to the attraction being given to 6 groups of up to 6 guests each at a time, but it is not allowed for guests to make their trip solo. There is opportunity to purchase – from a vending machine – a charm of sorts which, the video explains, can be held up to the ghouls within to “weaken” them and thus give the guest a less intense experience. The video advises us not to stop or go back once inside but that there are several, well posted escape routes during our expedition.

Once within, our groups are seated in the foyer/waiting room of the decrepit Hospital and given another video to watch detailing the theme of the attraction; and the most important information we need is this: ZOMBIES. In truth, this presentation began to drag and we suspect its purpose is to give previous groups enough time to clear the areas we will soon visit. True to theme, our groups are called one at a time to the X-ray room for a photo opportunity before we finally are granted access to the Hospital proper and once inside, we are treated to a sprawling mess of wrecked corridors, wards, treatment rooms, as we attempt to make our way through this rotting compound.

The Hospital is the finest dressed scare attraction that this visitor has yet ever been aware of; at least in one walk through, there appears to be no detail missed; every inch of the attraction is true to theme, including the ceilings (which fans of scare attractions will know are so often missed), and the attraction uses its expansive space to great effect. At the start of our walk through (and several subsequent times), we find ourselves wandering down a stretching corridor, dozens of doors on each side, many further corridors branching off – where necessary, blocked off to theme; overturned beds piled high, metal gates chained shut, warning tape haphazardly strewn across the halls – and each step makes us more acutely aware of how exposed we are to the countless doors, hatches, blindspots where an actor is free to emerge from at any time. Towards the beginning of the tour, this tension truly makes the atmosphere; it is some time before we are accosted by the attraction's ghouls, though we catch glimpses of movement and hear distant grunts and sounds before then.

It is with perverse delight that we find ourselves sprinting down corridors away from the infected that is hot on our heels, and perhaps into one of the building's many perfectly finished rooms. A storage room, wherein we must zig-zag over and around metal shelving covered in medical equipment and implements, never sure if the zombie on the other side of one rack of shelves can reach us until it's too late. A mortuary, complete with laid out cadavers, freezer doors, plastic curtains... and did that body just move? An operating theatre looking exactly like a surgery abruptly abandoned weeks ago, the high-quality prop patient still lying on the table.

The set itself even tells us a story; our walk through progresses through several stages – a wrecked and bloodied hospital at first, looking more abandoned and aged than anything else, then evidence of more panic – stairwells blocked with barricades of cabinets and beds, trashed rooms and bloodied walls gives us hints of the havoc of previous attempts to survive the undead scourge. We soon find more tragic corpses (or pieces of same), some pinned under lockers or in corners, more and more blood, as we see the result of these survival attempts. We even come across make-shift morgues or quarantine areas – plastic tents, curtains, bodybags and shrouded remains lined up, overspilling the capacity of the morgue that tells us how the disaster in the Hospital soon span out of control. In the later stages of the visit, we even come across evidence of military involvements; the compulsory camouflage netting and an ad hoc staging area with themed containers, equipment documents strewn over tables whispers of the last line of defence falling to the onslaught.

Better still, near the end of our trip through the Hospital, we find ourselves more and more away from the public face of the building: treatment rooms give way to lockers and shelves, corridors give way to boiler housings and plant rooms as we creep across walkways above vast, rusting tanks, and seating areas give way to the Hospital's inside garage and its crashed ambulance. It puts us much in the mind of the age-old survival horror game, where we find ourself in more and more dangerous (and often underground) environments as the story develops and the situation worsens.

The cast are energetic – and some quite creative in their scares – and take to chasing us, clambering over the sets, accosting us with jump scares from behind scenery, and one zombie even stumbling towards us, carrying a rotary phone and holding out the handpiece to us as he emits a low, creaking moan. An unusual approach that nonetheless stood out for its uniqueness that unnerved and confused this visitor very effectively.

Overall, the set and the story it tells us is sublime. Not an inch of the attraction is off theme other than the aforementioned escape doors, and the time, effort and money it must have taken to properly dress such a large building is mind-boggling. It is even more impressive when we consider that, according to information this writer could find, the attraction appears to have been purpose built and not an appropriated pre-existed building already similarly laid out. The Hospital is surprisingly well lit without a soundtrack or sound-effects other than those that are practical; noises caused by the cast or sensor-triggered effects and it does not require them as its strength is in tension and atmosphere; it feels like exploration of a zombie-infested hospital or a survival horror game rather than being part of a movie. Fans of Derren Brown may remark upon it having very much the style of his “Apocalypse” special or his now infamous zombie video game effect.

In fact, this type of atmosphere is exactly why the attraction has in the past been themed to and used for advertising the Silent Hill and Resident Evil series of games, and many people to this day ask if the Haunted Hospital is the Resident Evil scare attraction. Highlights include the whole set – particularly some listed areas above – , and an effective chase to push guests out of the Hospital and rushing out the exit and into the sight of the outside queue.

There are, however, some weaknesses and oddities to the attraction:

The over 900 metre walkthrough, though immaculately made up and atmospheric, lacks enough urgency and actors as we progress through. After the 3rd or 4th long corridor, we no longer feel the same dread and are instead mechanically checking corners and doorways for lurking shadows and the stakes do not feel like they change in terms of the performance as we stroll through the depths of the Hospital. It seems very much that the maze should have many more actors the later we are into it if it is to match its potential and the quality of the set itself. It's a shame that there seems to be such an imbalance between the physical attraction and the performance given when we encounter actors maybe only a dozen times as we explore.

There is mention of pen lights being provided – and containers to deposit them upon exit – but there seemed to be none present on the day of visit. This certainly wasn't a problem so perhaps this is a change that has occurred, especially when the Hospital is relatively well-lit in comparison with many scare attractions.

Lastly, the queues. The influx of guests to the attraction is very slow and only in small groups; a new intake was admitted approximately every 10 minutes and queue times can easily be over 2 hours, even during a low season weekday. There is no option at the Haunted Hospital for priority access so it can be a labour of love for any visitor to enjoy the experience.

Admission to Fuji-Q Highland is 1400JPY and 500JPY for the Haunted Hospital itself, with unlimited passport tickets being 5200JPY for an adult for 1 day. The attraction has an advertised walk through time of 50 minutes, with this visit lasting around 35-40 once inside. It is most certainly worth a visit for particular horror fans and it is only the incredibly high queue times that make it less attractive for more casual visitors. For those wishing to visit Fuji-Q Highland however, which boasts many other thoroughly enjoyable attractions, it is well worth stopping by the Haunted Hospital and experiencing it first hand – despite the need to improve the numbers of actors within, it is a superb example of urban exploration gone wrong and it's not every day you get to visit the world's longest year-round “haunted” attraction. 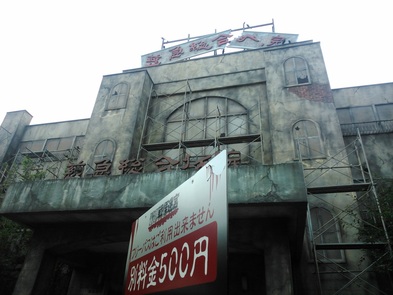 Links to our other Japanese reviews