Although we are predominantly a European news and reviews site, we love everything to do with Halloween and scare attractions, so were fascinated when this review came in from one of our readers who has been in Tokyo recently. With J-Horror a unique brand of it's own - would the language barrier cause any issues?

The obake yashiki (お化け屋敷 ) or “ghost house” is a staple in the Japanese horror tradition, especially at the height of summer – when relatives come together during August and the Bon season to welcome back the spirits of their deceased ancestors. Japanese ghost houses spring up during August to both pay tribute to the darker sides of this tradition and to give visitors a spine-chilling break from the intense heat. The attractions are often so popular that they stay open into September, along with several permanent attractions across Japan. Tokyo Dome City has run their seasonal ghost houses for 24 years, with 2014's offering being the “hide-and-seek haunted house”. Guests are met with a facade of a typical Japanese home, picturesque if not for the bloodied hand prints on the upper window (and the ubiquitous boards detailing the attraction's no touching/running/photography rules).

The queues were short, though this visit was early in the day, and small groups of up to 3 were admitted. Upon admission, we wee deposited in a small, darkening room where the scene is set – ten years ago, children and their mother were murdered here during a game of hide-and-seek. Now, the sound of laughter and playing can be heard once more. It is our turn to play the game. The attraction is a fairly easily navigable Japanese home, all small alcoves, tatami flooring, and futons, cast in dark hues and reds. The further we venture in, the more obvious it is that things are not quite right; children's laugh rings from behind paper walls, sliding doors move on their own, one revealing a doll looking out, and the ever-popular air cannon fires at opportune times.

The beauty in this attraction is in its atmosphere; loud noises and disorienting lighting effects are almost completely absent, favouring instead to let our imagination run wild and allow tension to build before the inevitable – but, in this case, conservatively used - impact/jump scare. We escalate with more blood, bodies and even a hanging ghoul or oni, that – though initially examined and ruled as safe – then animates to chase us down a narrow corridor and directly into the path of multiple possible scares.

It is a relief to emerge into the daylight and out of the claustrophobic corridors with far too many chances for an actor or effect to emerge at us to be comfortable with. The overall effect is very Japanese indeed; we do not have a clear and obvious physical threat – no looming monster or tangible maniac -, details are instead scarce on exactly what to expect in the house. It is hard – at first – to know whether we should fear the sounds of the children, their implied killer or some, at first unseen, otherworldly force. It is a cross between the best of Silent Hill and Ring. Its ideas of vengeful spirits returning and the – eventually, though fleetingly revealed – changeling-like entity we encounter in the later rooms fits right in with the obake yashiki's origins in Japanese folklore.

Attention-to-detail is not lacking; on a second visit, items from Astroboy manga strewn across the floor, small charms and toys and proper fixtures on cabinets and doors were observed in the sparse light. It should be noted that proper padding of doorways, corners and any potentially hazardous features were present but not obtrusive. Highlights were a tight u-section, obscured by hanging kimonos and hakama – the suspense of not knowing what was behind each garment was palpable. The dishevelled and lightly gored child's bedroom around half-way – completed twice a trio of flickering TVs, upon which a little girl gingerly repeats “hide-and-seek”; and the discovery that outside guests are able to watch a section of the house and trigger an air cannon on command for an extra scare.

Improvements could be made in the quality of the few mannequins featured in the house and in the quality of the costumes given to the cast. Perhaps one or two more moments of interaction directly with the cast could be achieves but – on a second visit – we begin to think that all the strings are being pulled – sometimes literally in a few cases – by the cast behind the scenes; the exact nature of scares differs, giving it good re-visit value.

Admission is 820JPY – though Tokyo Dome City offers wristband multiple admissions and day passes to its many rides - and the attraction takes an estimated 10 minutes to journey through, though a walk-through can easily be over in around 6-8 for the competent explorer. The story will be lost on non-Japanese speakers but this shouldn't affect enjoyment of the attraction and rules and information are posted clearly in English also. Overall, the Hide-and-Seek Haunted House succeeds in a quest to unnerve the guest and have even an experienced scarer question where the next scare may be coming from. Sadly only a short, seasonal attraction, Tokyo Dome City is well worth a visit during its summer season if you find yourself in Tokyo. 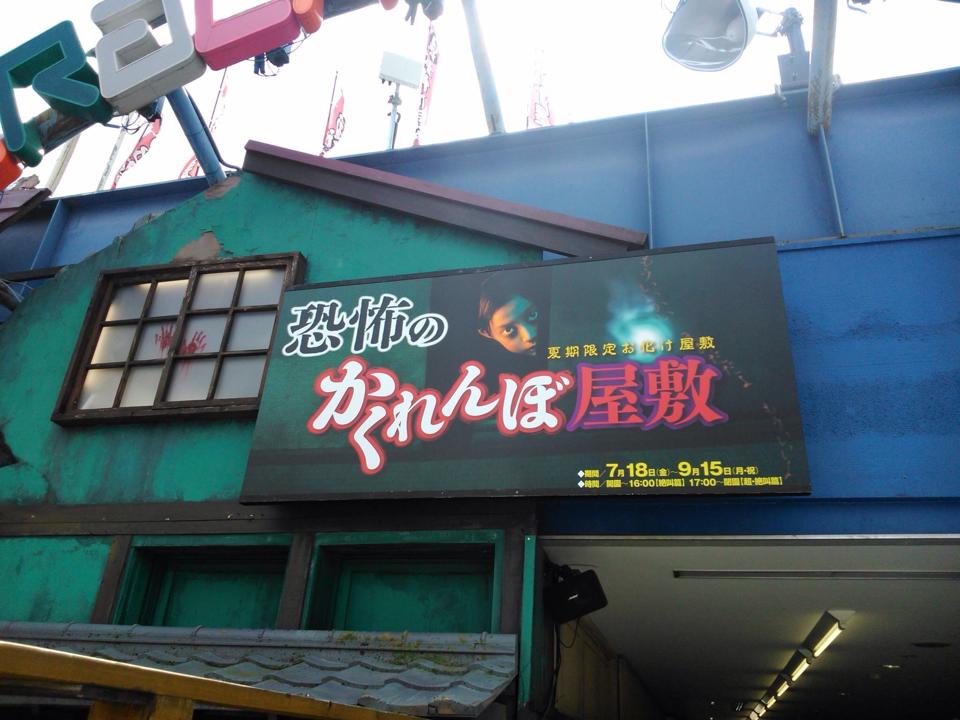