On arriving at York Maze it's easy to be taken aback at how large the venue is. One of the upsides of using an existing attraction is that there tends to be a better underlying infrastructure with more space to utilise and from the outset this makes the event feel more professional. Facilities are of a higher standard and the site on the whole appears better maintained than some of the seasonal only scare parks we have visited.

Hallowscream this year has one underlying theme instead of unconnected mazes as previously and this really made the event feel more cohesive. The actual story revolves around a recently discovered burial site, which turned out to be the remains of a travelling circus where the performers and animals were tragically killed. It is these spirits that we will encounter during our trip round the attractions:

Like previous opening stories at Hallowscream, The Seance is a cross between a theatrical production and a scare attraction. During the experience we witnessed the resident medium attempt to invoke spirits on the farm through the use of an Ouija Board, Pendulum and Spirit Box. Quite different from other attractions and although providing a couple of decent scares, the rest of the seance just seemed a little too scripted and obvious. It didn't help that a few of the control wires to make things move were visible from where we sat. Although slightly disappointed with the first attraction we applaud York Maze for trying something new, and hope that after a few more run throughs this becomes just as good as the rest of the attractions at the park.

Almost immediately upon entering The Freak Show, it became obvious that this wasn't going to be a traditional scare maze. This is because the attraction is an actual maze with multiple routes with twists and turns and dead ends. This was an excellent addition to the standard corn field formula and successfully heightened our sense of panic throughout. Along the way we encountered many victims of the savage wolfmen which got us excited to see these dreaded creatures for ourselves. Unfortunately by the time we eventally escaped, we had only seen one of these beasts and the final creature didnt quite live up to its fearsome reputation.The freak show was good entertainment but probably the least scary of all the mazes

Hallowscream always have one maze that stands out as being a bit different to anything else. Last year it was Symmetry, and for 2013 we have The Difference Engine, a crazy binary themed maze that almost defies explanation. Branding each member in our groups as either a 1 or 0 we were split up and left to venture into the maze in different directions. The theme and costumes for this maze were excellent, and rooms seemed to alternate between pitch black and bright white. The actors inside were particularly impressive and they helped create a terrifying experience by lurking in the fog filled rooms and appearing just when we least expected them!. To say much more about the show would give it away but we thoroughly enjoyed this unique experience.

Reincornation is a revamp of the parks clown maze with a number of clever tricks up its sleeve. Earlier in the year York Maze opened a House of Illusion attraction and we are pleased to see that this has been incorporated into the attraction which makes this so much more than just another "clowns in curtains" maze. Whether deliberate or by accident we found ourselves split up from the people we came with, and we quickly found that the best way to make new friends is to cling to strangers for dear life as you negotiate the twists and turns of this maze with horrific clowns on your tail! The whole experience from beginning to end was a sensory overload with tipping walkways and anti gravity rooms that had all of us stumbling around for the exit in sheer panic!

Barnaggeddon is a returning maze from last year and is probably the closest to a traditional scare maze, with its gruesome masks, chainsaws and freaks ready to attack. What sets it apart is the sheer intensity of some of the scares and the clever scenes (who wouldn't want to have the contents of a filthy toilet explode in their face?!) The scenes may be random but are all really impressive and the maze has a lot to throw at its guests before they stumble out into the night. A real example in how to execute an exciting high energy maze.
After the mazes, visitors are free to enter the Stumble Inn for a well deserved pint to calm their nerves before they head home.  As we had just come out of Barnaggedon - we certainly needed it!

Overall we thoroughly enjoyed Hallowscream at York Maze. We feel that The Seance could do with a bit of tightening up but the other mazes all provided something new, and were well put together, with great scares throughout. It's hard to pick out one maze when they are all so strong, but the originality in the design of The Difference Engine has to be specially commended! 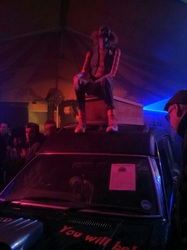 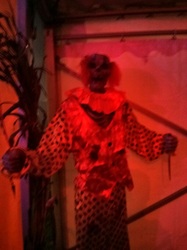 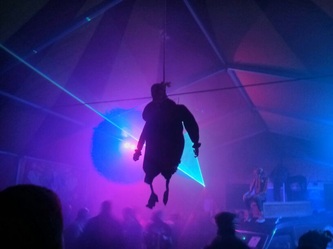 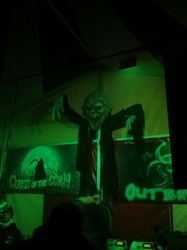 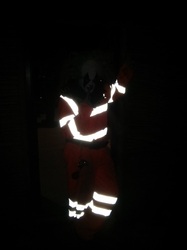 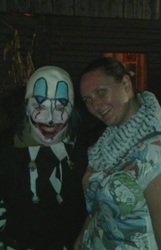 Very scary - I visited York Maze for the first time a couple of nights ago and may I say WOW! I indeed was impressed. The mazes were creative and some disorientating. Very scary and some good actors. The street performer were very into their performances and may I say, Chainsaws galore! So if the idea of a twisted clown with a chainsaw or a dead Michael Myers zombie with a chainsaw frightens you well then wander the venue with caution as these guys pop up everywhere. They stalk and follow you around the park. They even wait outside the toilets for unsuspecting victims or anyone who runs in there for refuge... it doesn't work folks it is indeed a run for your lives visit!
The mazes were great except I do have to say I was disappointed with the Seance Attraction as the ending was rather an anti climax. It is a long queue time for something that isn't as thrilling as it is hyped up to be but don't let that put a damper on it as I said before I was very impressed with the rest of the attractions and would most certainly go again. Highly recommended :) - Mackenzie

Mildly scary
I visited in 2012 and loved it, there were actors everywhere chasing you. This year is wasn't the case!!
Walking through the actual attractions was rushed, basically catching up to other groups who had just been scared so not scaring you. Last year the maze was so scary wearing the masks etc. this year absolute rubbish freak show!!!
My favourite was the carnevil but not enough actors in there.
I'm very disappointed as I brought guests from hundreds of miles away. I won't be visiting again next year !!