In 2013, Twisted Attractions came out of nowhere and created Birmigham's first scare attraction in an old disused shop space in the middle of the City. With a number of unique ideas crossed with some traditional scares, the maze certainly drew a lot of attention (and crowds) and over the course of its run, migrated into quite an extreme event. Earlier this year the team were back in a much larger venue with The Facility - an attraction that surprised and scared us in its combination of original concepts and designs alongside a sold story, and some very extreme scares. So when it was announced that this year's event would be branded Halloween Scare Nights and contain two mazes - we knew we had to go and visit!

Based in the same venue as The Facility, the first thing that is noticeable is the detailed theming around the two entrances. House of Insomnia looks like a genuine little cabin in the woods somewhere and the torches outside Ward 78 flicker with deadly intensity. Guests can choose to experience either event or both together in a discounted combined ticket. We decided to start with the The House of Insomnia first: 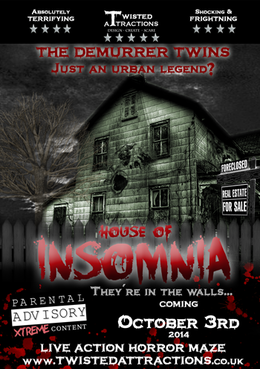 Behind it's impressive facade, the House of insomnia hides a tightly designed, well themed horror maze with some impressive scares throughout. The rooms including many particular scenes experienced in other haunted houses but are executed with care and and enthusiasm.

Where the maze has tried to be a little different is in an opening scene that left us a little puzzled on press night. We understand that more work was to be completed on the scene but we were unable to hear the back story for the maze and therefore truly enjoy some of the more subtle storytelling prevalent throughout the show.

The path through the house seemed particularly twisted and the team should be commended for the claustrophobic nature created by the small rooms packed full of detailed artefacts. Even on our second visit - the attention to detail in some of the rooms is hard to take in.

All in - a classic Horror House experience with some great scares throughout. 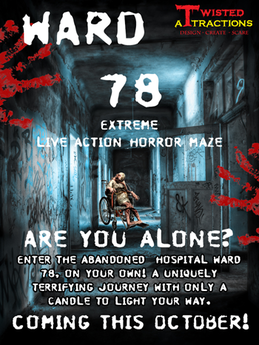 Ward 78 is a far different proposal with guests asked to experience the show in small groups, preferably alone Threatening extreme live action and an adult content we were pleased to see that this show pushed the boundaries in terms of scares and immersive experience without resorting to cheap tricks or shocks (as other alone attractions have in the past).

Armed with just a candle (which this reviewer strongly fought not to have taken away once inside the show!), guests are given a very personal experience which is all encompassing, very personal, believable and yet truly terrifying.

Some of our group experienced the show in small groups, but we strongly recommend that you do it as it was designed - as a one man experience. Certainly the experience was more frightening, and eventually more rewarding for those of us who dared to enter the Ward by ourselves.

In summary a clever but terrifying experience that relied on genuine scares rather than just trying to shock with physical violence or sexual situations.

The two shows at Halloween Scream Nights are very different in style and experience but both share the same twisted design ethic for detailed theming, in your face scares, and non stop action. The acting talent throughout both shows were extremely physical and vocal and all helped to create two completely different yet equally scary experiences.

The Twisted Attractions team clearly have a passion for scaring people and they do it very well. With their mazes being the first to open for the 2014 Halloween season, the team have really sent out a challenge to all other players in the scare attraction market "think you're scary? then try and beat this!"

Twisted Attractions were the minds behind Birmingham’s first scare attraction which was situated in the heart of the city in a disused local shop. During its initial run it pulled heavy crowds and was rated highly on TripAdvisor. After their initial success, the team returned with The Facility, which featured high extreme scares and proved to be an incredible success.

For 2014, Twisted Attractions returns to Birmingham once again with two brand new attractions: House of Insomnia and Ward 78. Set in the same venue as The Facility, it is clear to see that the theming has changed considerably. Firstly, House of Insomnia looks like something that is from Friday 13th. To its right, Ward 78 features a very basic façade and its low lit torches flicker give nothing away of what is to come.

The first attraction we decided to start with was House of Insomnia. Once we entered the first room of the maze, it was clear that its creators had paid very close attention to detail. The design of the maze featured very confined spaces and scares throughout. House of Insomnia borrows some features which can be seen in other mazes but it is still a joy going through them once again.

In some ways, House of Insomnia tries to interweave a story throughout, but due to technical issues on the press night, we were left wondering why we should not be in the house in the first place. We were assured by Twisted Attractions that work was still to be completed and this would ensure the full story is understood once open to the public.

The maze should be commended on its twisty paths and use of space which at one point had our group wondering where the exit was into the next room. The maze builds nicely to a crescendo but struggled to force our entire group running out of the exit.

Overall, the maze features highly detailed sets and effects combined with some good scares throughout.

Ward 78 is a total contrast to House of Insomnia, where guests are invited to enter alone (or small groups during busy periods). Entering alone allows the actors to give the guest a more extreme version of the maze and allows for more improvisation with each victim. During the queue for the maze it was apparent that this attraction would not be for the faint hearted, with a young actor who improvised with my group in ways that made some guests petrified even before entering the attraction. During the queue our group experienced licking, spitting, touching and the occasional explicit conversation which put some of our group on edge from the off.

During our visit to Ward 78, a number of our group entered alone and others in small groups to share the experience together. It is clear that this attraction is designed for one person at a time rather than a group. Armed with just a candle and low level lighting, it became a shock when the candle was taken away very early on into the maze.

Ward 78 is clearly the more intense maze of the two that Twisted Attractions has to offer this year. It uses tight spaces and physical contact to heighten the fright factor rather than relying on special effects or cheap scares throughout.

Overall, the two mazes on offer this year in Birmingham differ greatly in the way in which they thrill and entertain the audience. It is clear to see the guys behind Twisted Attraction have a clear passion for scaring, which can be seen in their intricate set design and the scares they have to offer in each attraction. The actors in both mazes know how to push the limit with guests and are not afraid to test the boundaries, creating something both frightening and unique in Birmingham.

Twisted Attractions Halloween Scare Nights can be experienced until November 1st in Birmingham.