End of Days Events won the 2015 Scar Award for best zombie survival event, but not wanting to rest on their laurels, invited us to try our their new offering “The Mill”. How would we fare on the second part of their ongoing story based in an old, seemingly disused mill in Huddersfield? Especially as we were booked in on the late night extreme version!

The second we parked the car we were met by a man dressed in army fatigues who seemed slightly on edge. There were no pleasantries, we were immediately in the story, and we already started to feel slightly uncomfortable.The story behind the event is that following the apocalypse, strong holds like The Mill had been set up to ensure humanity’s survival. This particular stronghold housed a team of weapons experts, all defending a research doctor. As we had guns pointed to our heads, that’s all we can tell you about the actual story line - they know where we live - we don't want to upset them any more!

It was clear from the start that the three Marshall’s in charge of survivor safety were deadly serious and wouldn’t tolerate anybody not following their rules. During a brief introduction one of the Marshall’s heard something and took one of the Scaretour guests and two other people to investigate. This was where we saw first-hand how physical and demanding this event was going to be. The Marshall’s delivered various safety speeches and we were taken in pairs to sign a disclaimer. This is naturally an important part but it seemed to take quite a while, eating into the anticipation we were feeling. Perhaps it could have been done altogether, as an actual scene?

From here we headed to weapons training using pump action shotguns that fire three rounds per shot. The solid plastic BB’s the gun’s fire pack a real punch...as we would unfortunately find out for ourselves. Our training took place by one of the cells that undead test subjects were being held in and it’s hard to concentrate when you have 6 extremely bloodied zombies glaring and snarling at you through a window.

On guarded transfer to the next location, all hell literally broke loose in a well-played scene. We were trapped and our survival skills and weapons training were about to be tested. Now we’d like to pretend we’re experts in all things apocalyptic but on first contact with the undead, one of the ScareTOUR team was on the floor with a zombie on top of him and could feel it’s teeth literally gnawing at his neck. The zombie wasn’t going to move until one of the other player’s made it do so.

The three-hour long event was fast paced and the zombies were relentless. They came from every angle taking the shots we fired at them. The Marshall’s were also brutal and had no problem in physically moving us or screaming orders at us to get everyone to focus. There were loud surprises, twists and turns, insults galore and a story that saw the group broken into teams taking different paths, all contributing to the big finale.

Unfortunately there was one scene that was vital to the story but only two of us got to see it as it took place in the doctor’s room which was very small. It’s such a good scene it would be a shame if wasn’t played out for everyone to see on future events. A minor gripe and one that isn't insurmountable. As for the venue itself - The Mill is a great location but there isn’t much in the way of set dressing. Fortunately the run down nature of this regular Airsoft combat zone, compensates for this.

This was a thoroughly enjoyable night and we met some fantastic people in the staff, actors and other players. The zombies were well costumed and never came out of character, even when they’re being fired at non-stop, and believe us, it hurts! We left the venue, tired, sore, bloodied from the zombies and aching. Job well done. We’d had a fantastic time and with the next event The Purge now being announced, we will be back for more! 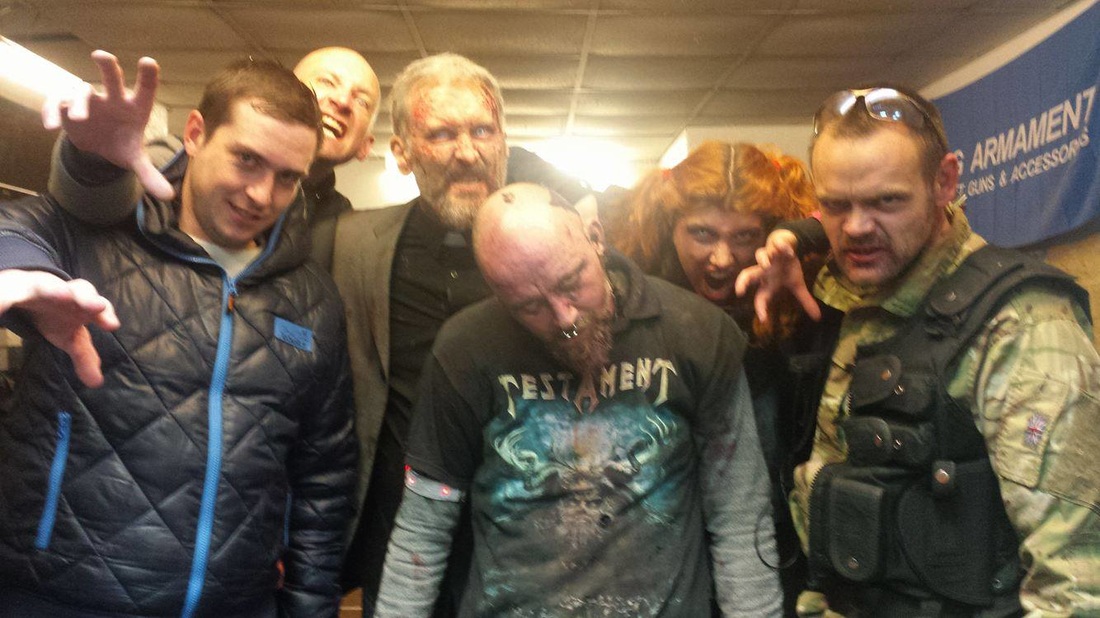