Just a year after Derren Brown's Ghost Train opened to mixed reviews in 2016, Thorpe Park have made a number of quite substantial changes. They set out to make the attraction deeper, darker and scarier, but have they succeeded? Like our review of the original attraction (see below) we really would advise that you enter knowing NOTHING about the experience but if you want a few spoilers then read ahead.

First off - we found the audio in the first half of the show to be much clearer and more audible than previously. One of our biggest complaints was that it was really difficult to understand what was happening, so it was nice to see this had been addressed. The movement of the train still works perfectly with the action in the VR footage and it's still very easy to believe you are sat alone and vulnerable on an underground train in the dark.

On the day we visited we are not sure whether the train effect in the live action segment was broken, or if the park have decided on a different scare here, but the scene certainly felt more chaotic. But it was as we settled in for the second part of the journey that the big changes have been made.

Instead of the computer game graphics of the original version, guests now experience a train full of real people (all wearing VR helmets so they COULD actually be the person sitting opposite you!)  So therefore when the demon attacks the train and starts picking people off one by one, it feels more real. The attacks themselves felt much more suspenseful, creating more of a feeling of dread than previously, and the screams and gasps around us were justified by a number of very quick and sudden scares.

​We also felt that the VR was more immersive here as you were encouraged to look up and down the train to look for the creatures instead of staring straight out into the city scene. This decision to bring the fear and action INTO the train is what makes this new version more believeable and scary, especially with the move from computer graphic to something more photo real.

One of the often stated flaws of the original version was the lack of killer ending. The VR finished with you plunging into hell, Derren would invite you to open your eyes and then you just took your VR helmet off and walked into the gift shop. Now there is a bit more narrative from Derren as you leave the train, and then there is that  "final destination"

We're not going to say what it is, but it's NOT the small scare maze that many scare enthusiasts were hoping for (like the one added to Nemesis Sub Terra at Alton Towers after that first opened) BUT there IS a live element to it, with a clever bit of deception that certainly had our group fooled and gave a great final scare to the experience.

We know a lot of people hated the attraction last year and this is still not going to please everyone. The technology still isn't 100% photo realistic and we did experience a few glitches with the vision. Saying that - we were very impressed with all the changes made this year and must commend the park for wanting to improve the experience less than a year after first debuting it

Very few details have publicly been released about Derren Brown's Ghost Train, which is now open at Thorpe Park. What we did know was that the attraction was created to "derail our minds" and would make extensive use of the HTC virtual reality system.  After some lengthy delays which stopped the attraction from opening in May, the Ghost Train quietly slipped into Technical Rehearsals this week and we were invited down to try it out.

We entered Derren Brown's Ghost Train knowing nothing about what was going to happen inside. We don't intend to reveal any large spoilers in this review (it's not what a review is for) but the nature of any review will hint at some of the elements of the attraction. If you just want to know what we thought of the attraction, then finish to the end of this paragraph and then go and look at some cat videos on YouTube! Seriously if you really want to enter the experience completely in the dark then just know that we thought it was "mind scramblingly scary fun"

Still here? Good. Now let's address the choice of words in that last paragraph. The experience is billed as an attraction and many people have wondered what this means. Would it be a ride? would it be a walkthrough experience or would it be a seated theatrical show where things happen around you (a la Hex at Alton Towers). Really without giving the game away - the train definitely moves somewhere during the experience, there IS a live element to the show and there are a lot of things happening around you. In which order any of this happens, is one of the secrets we will keep.

The key element is the stunning virtual reality powered by HTC Vive. One minute you are sat in a crowded train surrounded by fellow park guests and the next you are sat alone, in an empty carriage, at night. The eeriness of looking up and down and all around you in a completely empty carriage is both stunning and unnerving. At one point this reviewer had to reach out with an elbow just to make sure that there was someone sat next to them. It's a very vulnerable and quite scary experience, so once creepy things start to happen, it's quite hard not to be scared. There is a simple but effective story that continues some subtle references from the queueline, but to be honest we would have liked the audio to be a little louder. Once people around were screaming, it was hard to hear everything going on. The early VR scenes are cleverly subtle and unnerving and the immersion is very realistic. Especially as you can feel the movement of the train, which matches the action playing out in your head. One of the most exciting things is that different people have slightly different experiences, and half the joy of the experience is discussing afterwards some of the subtle differences between shows.

By the time all hell has been let loose, the VR takes a slightly more computer game style element, slightly eschewing the photo realism of the early scenes. But it's understandable with what you experience. Just sit tight, look all around you, and remind yourself over and over that you aren't alone on that train and those things AREN'T coming just for you!. You will jump in places, you may let out a scream (certainly those around us did) or you may just sit grinning from ear to ear in awe at the VR world unfolding around you. It's hard not to get caught up in the action, as the live movement of the train interacts seamlessly with the images. In these scenes Thorpe and Derren really throw the book at you and it's clear to see why an age restriction has been put on this experience!

We left Derren Brown's Ghost Train completely blown away by the WHOLE experience. Granted the sound could have been louder in the first half to really set up the action ahead, but that should be easy to remedy. Having now experienced the full show it is understandable why it has taken so long to get ready and why it is still have technical difficulties. The VR technology, combined with the ride movement, the effects, the live elements and the sheer logistics of moving 60 people around quickly and efficiently within the building, are staggering - it is certainly the most ambitious attraction the UK has ever seen.

But was it worth all the hype and the long delays? Absolutely! 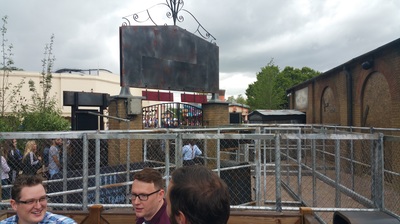 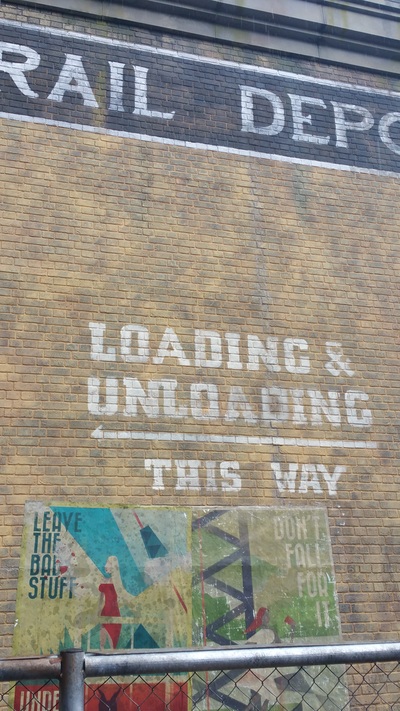 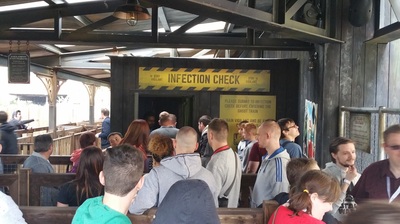 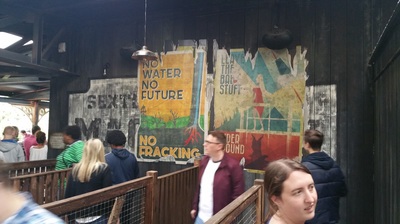 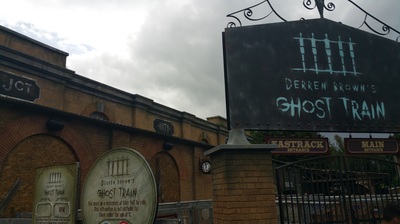 Scary
We had a 45 minute wait for what was a good few minutes of enjoyment. It takes a few minutes to do the thing so you do feel like it was worth the wait. I found the experience more 'jumpy' rather than 'scary'. I had a huge grin on my face as I waited for the mind games to kick in whilst sitting there in my VR headset. You're just waiting for a fright to happen. Worth visiting, but do expect long queues.

Terrifying
The Derren Brown ghost train is by far the best attraction in Thorpe park and by far the most scariest experience you will witness for a long time. At the end where a huge demon comes out and jumps out at you in a fake shop just as you think the ride is over scared the living daylight out of me!

Terrifying - At first I was too nervous to go on it but when I finally had enough courage I came out of it so terrified I had to have something to eat to calm down lol. Don't get me wrong, it's a truly amazing and uniquely entertaining ride. I just haven't been on a ride that terrified me to death for quite a while lol. As it's such a popular ride the queue can get quite long but I'll tell you now that it's definitely worth it. It's nothing like the type of ghost trains we're familiar with. Seriously if ever you go to Thorpe Park make sure you go on it at l east more than once as it's never the same ride twice. One of the best rides I've ever been on in my entire life. And I'm only 27. I'm not surprised Derren Brown invented this as he is the master of mind manipulation