We have been visiting Cursed for several years and have been impressed with how much it has grown. Compared to some "scream parks", Cursed is one continuous tour from begiining to end, separated by a number of different themed attractions and mazes along the way. The pathways between the different attractions can still seem a bit long without much happening but the creative team have focussed on the scares in the individual shows and after several of the shows, its quite nice to have a breather before plunging into the next scream filled area.

With a new entry point (that was far more atmospheric than the previous one), we were soon given the rules and heaed off to our first experience..

The Toy Shop was new for this year and was a real bang to start the evening on. We're not sure if it was a large number of actors or clever attraction design, but the scares came so thick and fast with the Toy maker and his devious toys terrorising us multiple times. The design of the sets, costumes and tight corridors of this attraction were all as impressive as the scares and the whole thing proved to be an excellent start to the evening.

The Pig Pen has always been a short but intense Heras fencing maze but this year the actors, were really able to throw themselves around and over the fences with abandon. With constant taunts of "here piggy piggy" the inhabitants of the pig pen were some of the liveliest of the night. Despite the fact we could see them coming through the fencing, they still managed some great impact screams and we were pleased to escape from their clutches.

Following the same layout as previously, the next "attraction" in the line up is The Field of Screams, a storytelling experience with a couple of scares. Like before, this is easily the weakest part of the event and despite a small finale where we had to run through the woods, The Field of Screams is mostly unmemorable.

Next up is The Mine which really sets up the atmosphere of a dark and claustrophobic coalmine. Noises and bangs could be heard throughout and the actor/actors inside managed a number of good scares from us as well as completely confusing us (again) with how to escape the final room.

New for this year is a mid trail break which is a great chance to grab some refreshments  before tacking the final mazes. The only problem being that this created a small batching issue at the next attraction (until that point we had just walked straight up and into each scene). Fortunately it wasn't too long and we looked forward to visiting BrothHell - one of our favourites of last year.

Sadly Broth Hell this year was very lacking in scares, we originally loved the idea of three different routes but when all of our group met up again in the middle of the maze, we hadn't one had one scream between us. The attraction picked up towards the end with a some very lively actors using the space to create some good scares. It;s just a shame we hadnt seen them earlier in the maze.

Of course, any event with multiple attractions will have ups and downs in style of experience, but fortunately Cursed know that they need to leave people screaming at the end so the last two mazes really go for it. Uncle Tyler's Work Chop was a short sharp shock that had us hunted by some nasty hillbillies hungry for our flesh. The attraction had some fun scenes throughout and the actors were clearly having fun. We left the Work Chop on a high. Little did we know we were about to get higher!

Cell 13 is the final maze of the evening and truly is crazy. Whether these inmates are crazed prisoners or just crazy, is never explained and it doesnt need to be. From beginning to end, Cell 13 is an assault on all senses. The maze is noisy, the strobes are some of the most intense we have experienced and the actors were literally climbing the walls to get at us. There really was no where to hide and the maze seemed to go on forever as we struggled to find a way out. The pictures below that are taken by a hidden photograph, are a good indication of how crazy this attraction is. Look at the expressions on our faces and look at the different directions we are looking in. All in all - it was a stunning finale.

The whole route around Cursed took us about 50 minutes and in that time we had experienced a rollercoaster of fears and some screams. Some of the mazes were terrifying, some were a bit scary and one (the walk through the forest) felt out of place. The variety in scares works well though, to create one immersive event that entertained us from beginning to end. We look forward to seeing what they come up with for 2016 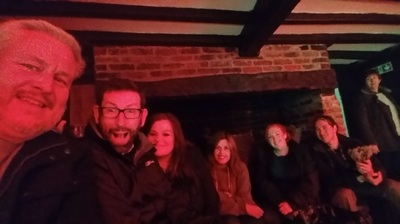 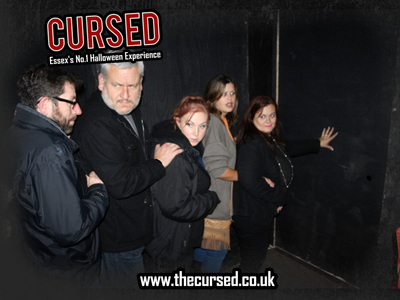 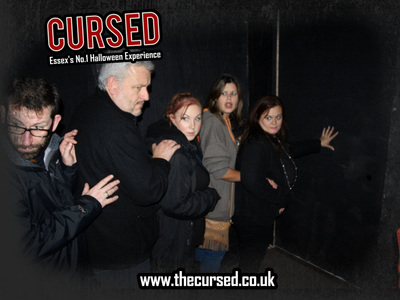 Toy Shop - A change from last year, “The Toy Shop” is new and now complete with its toy maker master and his dolls. A longer haunt than the previous resident and with some lovely little scenes set within its walls. Very clever and simple special effects add to its charm. The actors worked this area really well and on reflection it felt like many more actors than there actually were. Very enjoyable start to the evening!!

We walked along the glow stick marked paths and into the fields. We could see and hear the next haunt as we approached and anticipation of what was to come…

Pig Pen
Last year we felt this was the weakest of all their haunts, but the new layout definitely changed that opinion. The main man and his piggys worked the maze so well. Though being actually penned in at one point, it actually felt like we were being rounded up ready for feeding time, but who’s?. The clever central scene felt well-rehearsed and the dynamic group of actors seemed in total synchronisation. This made it so much more enjoyable this year. Well done to all!!

The Forest
Another low scorer last year that has had a welcomed make-over. The simple consistent flowing tale told by our helpful guide through the forest, made a much more enjoyable section than last year’s very disjointed and confusing one.
As we were led through the forest, we experienced parts of the tale for ourselves and became more immersed almost forgetting it wasn’t real. Superb use of costumes for full effect and it had us on edge long after the end of this one.

The Mine
Claustrophobic from the start it sets the feel of this haunt well  It had us ducking and shuffling through tight corridors and tunnels. Some simple effects again, but perfectly fitting for this haunt. The main actor seemed to be having lots of fun with us and kept us on our toes. Must remember the exit route next time, as always have a problem leaving!!

Broth Hell
One of last year’s more interesting haunts sadly left us a little disappointed this year. Sets were perfectly themed again, but the actors lacked a little “sleaze” this time. Hopefully this will develop over the run for them. Loved the splitting of groups, but wanted a little more than we got. Will be keeping an eye on this one next year.

Cell 13
Oh my gosh!! We loved this haunt last year …but this year we REALLY loved it!! The actors did a fantastic job of working the space, with attacks from all angles!! Reminiscent of the “Old style” asylum at Thorpe from years ago. Great sets and the soundtrack was perfect to add to the manic craziness that lived inside those walls. This one had us on edge from start to finish. BRAVO!!

Overall the whole event has a better flow between haunts. Clearer marked paths and less hi-vis stewards made it feel more of a complete attraction, not so disjointed as last years was.

This then extends the tension and anticipation when walking from haunt to haunt. We liked the “pit stop” halfway through which gave a little nod to “Mr Tickles” the clown from last year and gave us a chance to grab a drink or food rather than wait till the very end.

The secret photo is a great idea too, even though ours wasn’t as perfect as some other groups had been.
We had a great evening and the whole event had improved from last year making it feel more professional.
​
I am looking forward to next year to see what has a “face lift “next but would be more than happy to see the same quality haunts it provided this year.