City of The Dead Tours

After hearing accounts of how fantastic the tour was I decided, after searching long and hard for signs of paranormal activity elsewhere, to travel to Edinburgh and join the tour.

Booking online was very easy and simple and this gave me a week or so to start to read the book 'The Ghost that Haunted Itself: MacKensie Poltergist'

I booked the 10:30pm tour as this took into account both the underground city of Edinburgh and the Greyfriars Graveyard, entering into the black mausoleum at the stroke of midnight!

We met our tour guide  Dave and stood around waiting for the final group members to join us. It was interesting hearing other groups whispered and discuss the possibilities of seeing or feeling something, and making appropriate plans on how if something happened the others would stay, run, scream etc.

Just as the last group, a slightly drunken hen party, join us the tour guide kicked the promotional stand and made everyone jump. This was right next to the hen party who proceeded to scream and startle the rest of the group. If nothing else these ladies were to provide entertainment for us all this evening!

We were introduced to the tour and given a brief overview of the evenings activities, told in no up certain terms that we were entering the tour at our own risk and that things may happen to us. The tour guide was very jovial and gave examples of things that could happen in a joking and light hearten manner, but I think the whole group new how bad it could become or even wanted to attract some activity.

Off we went following the tour guide down into the lowest depths of Edinburgh. Past stenching bins and down rickety cobble stone alleyways. The group, consisting of 31 people that streamed down the hill like a snake being charmed by the majestic music of terror. Down and down until we came to a small entrance which we entered at single file. At this point the magic of the tour slightly dispersed as the carcass of a pig was lying in a trough from the obviously profitable days business of a local restaurant and loud music from the pub next door. However we continued past this 21st century entrance and easily slipped back into the past horrors of the arches that now stood before us.

We huddle in the 1st of three arched rooms and the guide jumped up to the highest point and started to explain that he was a story teller not a historian so he would not be able to give specifics about dates etc. however his story telling was extremely good in conferring up what it must have been like trading, living or even dyeing in this hot damp arch. At this point two members of the group decided to walk out stating 'this is crap'. This particular guy was extremely drunk and clearly did not understand what the tour was about I think he may of succumbed to the music and preferred more alcohol than enjoy the stories being told by the guide.

The guide was fantastic he ignored the comment and carried on, I am sure others would have said someone in retaliation. We moved through to the next arch and it was very dark in here. We all huddled together and the stories were definatinatly making people feel on edge. The temperature of the room did drop but not to any degree where I felt like something was about to happen. Unfortunately for the hen party they were about to have an unforgettable few minutes. The guide was talking about staying away from the walls and dark spaces when all of a sudden a character came charging at the ladies making them scream at the top of their voices. It took a while for the. To settle down and the rest of the group laughed at them. I can understand why there is a need to put in scares coming from an attraction myself however I thought they were slightly cheap and the people at the back of the arch didn't get to see or really appreciate what was going on, as it was over so fast. Maybe if the character could have stopped and told their own story about something extra this would have made it more interactive and fun.

Moving on to the final pitch black arch and with the faint hum of music now in the distance it was time for the real spooks to start to scare us. The guide notched up the stories by talking about and mum and child and an occur ace when the lights failed! The guide switched off all the lights, at this point I started to begin to worry as I am not good in the dark so I closed my eyes! The story was detailing something grabbing hold of the mums hand and squeezing. As the guide describe the terror of the mums story and his voice becoming quieter he quickly turned on the light and was right in front of the hen party. Again the screamed and made everyone else jump. I unfortunately missed it as I had my eyes closed! This lightened the atmosphere and in a way a suitable ending for the tour of the underground city.

Now to climb out of hell up steep steps and a mountainous hill, especially hard as legs tremble from standing in the cold arches of Edinburgh. we are now heading to one of the most spookiest places in Edinburgh just as the church bells are about to chime 12!!

With every steps that we took nearer to the graveyard was another beat my heart was making faster than its normal rhythm. I was wondering weather or not it was such a good idea about reading the book before visiting the mausoleum. The tour guide seemed to be rushing along at this point and it would have been nice to have stayed together as a group, maybe even a couple of stories on the way about dark alley ways or even about the Greyfriars bobby.
We walked through the gates into the graveyard and walked past the very bright 'city of the dead' gift shop, as we were only half way round and about tot enter the mauseleum this did take the edge off and make me feel safe which iis a shame as the tour guide had been trying to build the tour group up. We made our way into the graveyard and made a quick stop off to hear a story about the grave robbers. Then went to the entrance of the  Covenanters prison, the mausoleum of MacKensie was pointed out which was a shame as I thought the tour guide could have made more of this section of the tour, especially explaining the tramp and how he broke in.

As the guide was telling the story of the prison and its inhabitants a black cat run across the wall with his little bell tinkling. Now this for me was great as it really made me believe that we were about to meet something special. I am not sure if this was part of the act, the guide indicated that it always ran along here, but it was great. I was sucked in again and starting to feel nervous.

The guide opened the gate, the group walked I. And up to the black mausoleum. The air was tense and the group were starting to become nervous you could feel the atmosphere changing. We crammed in the black mausoleum and was reminded not to stand near the walls as bad things lurk in walls. Everyone huddled in to hear the story of the poltergeist. The story was reaching a crescendo when a character came rushing in and the hen party practically died. They screamed and made everyone else jump. The guide went on to explain the reasons for the scares and what he believes is the real reason for people feeling they way they do in these places. The tour guide then led the group out of the prison area and over to the gift shop.

The tour was fantastic and I would definitely recommend it to people who are visiting the area. I think having read the book my expectations were higher and I thought that someone would faint, feel like they had been touched etc. the mausoleum itself was not as terrifying either, I think with the warm weather we have been having it didn't feel spooky, damp or cold which made us all feel a lot safer. Also the tiles on the roof are newer, and as the guide spent so long talking about the roof and bricks in the arches it made me more aware of the building materials in the mausoleum. The guide was fantastic but maybe more shorter stories along the route and actually telling the right stories at the right place in the graveyard would have add to the anticipation of going into the final mausoleum. 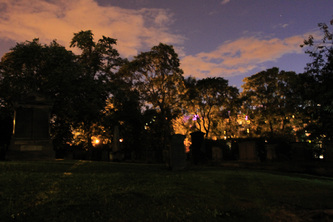 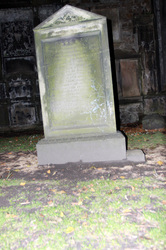 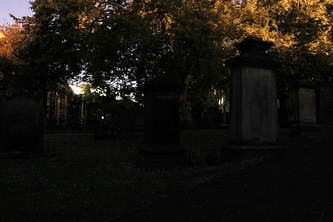 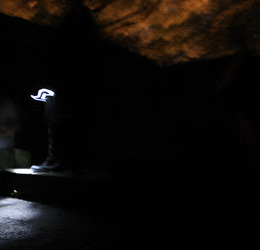 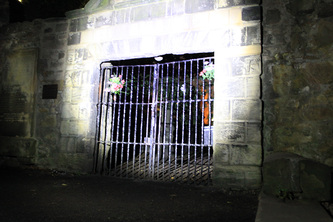 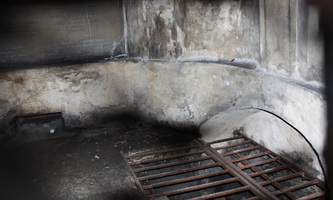