City of the Dead Tours - Review

The graveyard tours by City of the Dead are the ultimate ScareTour for Edinburgh ghosts. Recounting terrible stories covering the history of the city, guests are walked to famous sites including Greyfriars Graveyard – potentially the home to over a million dead bodies over the years.

The tour covers stories ranging from plague victims through to the most famous story of Greyfriars Bobby – the dog that sat by his master’s graveside for years, as well as the history of the graveyard’s most notorious resident – George Mackenzie. All these stories are told with much reverence and respect for the sheer volume of dead people under our feet and the knowledge of the tour guide was exemplary. His accounts of some of Edinburgh’s greatest atrocities were delivered expertly with the right balance of humour and horror. Not too scary to terrify you but not too light as to ruin the atmosphere.

And, what an atmosphere – Greyfriars is probably one of the most impressive and well maintained graveyards in Scotland. Everywhere you look there are massive mausoleums and shrines to the dead with intricate rock work and carvings. This grave yard though is reputedly haunted.
The most documented case is that of the restless spirit of the infamous 'Bloody' George Mackenzie. As a lawyer and Lord Advocate during the reign of King Charles II, his violent methods of torturing and killing were legendary. When he died 1691, he was buried in Greyfriars Graveyard, in an impressively large mausoleum.

It is believed that because of the horrific things he did in his life, he could not rest in peace and the fateful events of one night unleashed the “poltergeist”.

Allegedly, a homeless man came into the graveyard looking for shelter on a rainy December night. The gate had been left unlocked by mistake and he decided to try to get into Mackenzie’s tomb, as it was one of the most sheltered ones in the whole graveyard. He was able to fit through the opening and, once inside, saw there was a stairway down to a vault below. He found several coffins and attempted to open one, as there may have been something valuable buried with the bodies.

A local dog walker heard the homeless man trying to get into the coffins, and wandered towards the tomb wondering what was making the noise just as the homeless man fell through a hole in the floor into a pit full of mouldy skeletons.

Terrified and reeking of rotting flesh he ran out of the tomb and the dog walker mistook him for the ghost of Mackenzie and also promptly ran away. Quite a comical situation, if it hadn’t had such an impact on the paranormal!

After this disturbance the Mackenzie Poltergeist became active. The first instance was at the Mackenzie Mausoleum when a woman looking through the grille at the front was knocked backwards by a blast of cold air. Since then the activity has moved away from the tomb and into the The Black Mausoleum, a little tomb next door in the Covenanter’s Prison. After many incidents, the area was sealed up by the local council until the enterprising owner of the tours brought the rights and accepted the insurance liability of taking people in. To this day, only Black Hart Tours have access to the Mausoleum.

So with all the above knowledge and information about the poltergeist we were led into the place where the presence is felt most. Only 2 days before us, the tour had had an “incident” with someone fainting and we were warned strictly to move away from any cold spots, and warn the guide if anything untoward happened.
We move into the darkened tomb and wait, alert to every noise around us and every shuffle of feet. Not daring to look into the impenetrable darkness we stare intently at the guide as he reveals what has happened around us. A group of American tourists say they can hear whispering coming from the corner, everyone else shuffles nervously. Subconsciously everyone is bunching together. Was that the wind? What’s that shadow? The longer we stand there, the darker it gets. Suddenly the chills start to take over – whether this was a cold spot or not, shivers are running down my spine as if a ghostly hand has been run down my back. I feel a need to get back into the daylight. I’ve never been a big fan of darkness anyway and I start to feel really nervous. Am I am sensing something or is my imagination doing back flips? What IS that noise behind me? Is something going to happen? I quickly look to the light of the doorway and then BAM! The sudden appearance of a black cloaked figure makes EVERYONE scream!

The problem is – it’s just a man in a suit and we all laugh at the absurdity of that scare while quickly evacuating the area and stepping back into the outside world. There was no doubt that the scare was effective and to be honest it was very cathartic to be able to scream and then laugh and let some of the tension go. Our tour guide apologises for the cheap trick but brings us crashing down to earth when he said the “actor” is actually there for safety reasons and waits outside in case anything happens to the tour party inside.

As we walk back out of the graveyard we reflect on what we had just experienced. The two Americans swear that they heard whispering and it was from right behind them, everyone claimed to have moments of coldness which felt just a little more than the cool Edinburgh wind. But had we been visited by the poltergeist or not?

Over five years there have been numerous reports of hot spots, cold spots and cuts, bruises and burns on witnesses' bodies - often under their clothes. Photographs have been taken of these marks as well as many pictures of an unidentified shape in the tomb. There have been sightings of a white figure, unexplained smells, and auditory anomalies - including knocking noises under the ground and inside the tomb itself. Dead animals are found, unmarked, in front of the Black Mausoleum. People have complained that an unseen entity has pulled their hair, grabbed their legs and arms and hit them

As the bright lights of the city pulled us back to reality our thoughts of the poltergeist dwindled and we got on with our lives. Well that is until we got back to the hotel. Tired and getting ready for bed I was suddenly called to come and look at something strange, something we could give no logical reason for.

One of our team had a mark across his body running from shoulder to chest, like 4 scratches. We experimented with his hand to see if he could have just scratched himself but his hand would have had to be twisted and larger to make those sorts of scratches. Also – wouldn’t he have felt something? To get defined red marks, must have at least stung or pinched a bit at the time. He felt nothing, except cold. 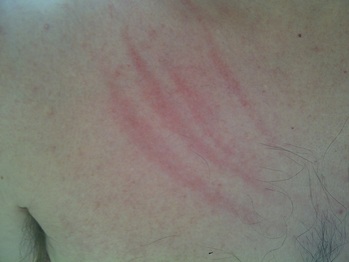 What caused these marks? We honestly dont know!
So there we have it – four unexplained scratches appearing on someone who has recently visited the site of Mackenzie’s Poltergeist. Now whether you believe in the paranormal or not (and I admit to being very sceptical but very scared of the whole notion) but the owners of the tour are taking it as another one for their evidence book. Were we attacked by the poltergeist or is there some other logical explanation? We don’t know the answer and perhaps never will!

Either way – we would highly recommend this tour. If you are brave enough!

Tours run nightly and can be booked in advance.