Chessington World of Adventures is predominantly a family theme park and over the years have tried many different types of attraction to celebrate Halloween. In 2012 they ventured just a little bit darker and introduced the Haunting in the Hollows, a genuinely scary attraction that upped the scare level in the park. Over at Hocus Pocus Hall, friendly witches had moved in, but the show was predominantly aimed at pre-schoolers. For 2013, the attraction has had a complete makeover and is back with a new mystery: 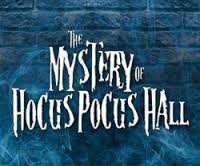 Hocus Pocus Hall has had a number of different makeovers in the past but nothing as drastic as this one. Incredibly, every single colourful goblin mural and bright wall painting has been covered over with new black walls and coverings. If it wasn't for the familiar route, you would never realise it was the same building as before. Overlaying the black walls, all the sets have been elaborately decorated with hundreds of artefacts and trinkets to make the rooms look completely realistic - from an Egyptian temple, to a pirate ship and a lush jungle. There are also so many little details that most guests wouldn't notice on first viewing - the "underwater" artwork needs to be studied to see the full detail. Despite the fact that this is a re-brand of an existing attraction all the existing features such as the trommel rotating tunnel and the mirror maze at the end are all built into the story (albeit all appearing in a slightly different state).

This completely new show is a fantastic mix of mystery and live action along with a couple of sudden appearances that made some of our group jump. The actors were all completely believable and the magical story holds a number of surprises including one special effect in the opening scene that surprised all of us. Although not really a scare attraction per-se, there is an underlying element of mystery which might scare the younger audience while the rest of us can just enjoy the impressive design and theatricality of the event.

We'll say this from the outset. Vampire; Haunting in the Hollows is genuinely scary. Far scarier than you would expect in a family theme park. That's not to say that it shouldn't be here - it's great to see a full mix of events at a park and although recommended for over 8s we saw a number of kids over that age genuinely terrified. So what makes it so good? We think the key aspect is the gradual build up of the story, There are a couple of jump scares near the beginning but as they are outside, they are less intense than the scares to come. These charcacters then set up the elaborate story that draws us into the experience. As the opening scenes are outside, guests feel quite safe and it's not until we start to go inside that the show takes a marked turn for the macabre and the tension starts to build up. A fun but impressive scare is enough to startle most people but then by going back outside, the air of dread is slightly lifted, ready for the terrifying finale.

Once back inside with the whole story behind us the shows finale is like something you would expect in a more adult themed experience. Sudden appearances, strobe lighting, dense fog and some very lively actors leave the group cowering trying to find a way out. It's chaotic, its loud, its strobey and its scary! In fact we had more scares in this finale than we have had in some other mazes in their entirety!

Watching the next generation of scare fans exit the attraction laughing showed that the park have made the right decision in pitching this attraction so scary.
Chessington have to be praised for the professionalism and level of detail in both these shows and the fact that neither of them talk down or condescend their target audience. Hocus Pocus Hall was magical with a few darker scary elements and the Vampire walk was just scary. Many people will leave Chessington off their to do list this year and that would be a grave mistake. The park is a perfect place for families and a great way to get your kids into something a bit scarier.
Check out our review of previous events 2012, 2011, 2010, Twilight Zone
For opening times and details check out the Chessington World of Adventures website