Chessington have been holding Halloween late night events for over 15 years now, and the park has always known how to create a good atmosphere. From the start, the level of theming has always been higher than most UK theme parks and every year sees more pumpkins and more little touches that make the whole park seem "Halloweenified"

The appeal of a late night "Fright Night" in the past used to be be about riding the Vampire rollercoaster in the dark or dancing to the DJ around Rameses Revenge, but over the last few years, a few slightly scarier things have joined the mix. The 2011 event is back even stronger than ever and offers a thrilling mix of fun and scares for the whole family... 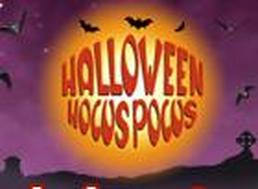 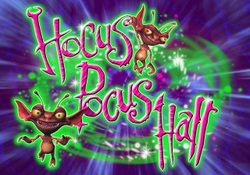 This year's Hocus Pocus Bewitched is the best we have seen over the last few years. Eschewing the regular Hocus Pocus story, Bewitched starts out like an adult attraction and even forces groups to walk through in the now familiar single file conga line. Once inside the main rooms of the Hall, witches and creatures seemed to appear from nowhere and everyone in our group recieved a good number of fun and mildly frightening scares.

The attraction is pitched perfectly at the family audience as we all came out laughing; after all - it's a great introduction to the world of scare for the little ones, while providing fun for the parents as well! 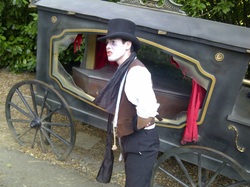 The Black Forest Walk returns for a third year and has corrected some of the weaker parts of 2010. When the attraction first opened it received good reviews for its atmospheric and well themed sets coupled with strong acting and some fun scares. Last year it felt much tamer, so it was nice to get a couple of good startle scares as an adult and have to push a very scared 8 year old through!

The new longer undercover section worked well and all the actors inside were enthusiastic yet staying on the right side of the divide between fun and scary. 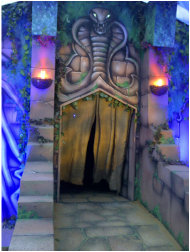 The Krypt is new for 2011 and was proving very popular with guests, which meant a slow moving 45 minute queue on a quiet day, when even the biggest rollercoasters had less than a 30 minute wait. The problem with capacity is because guests are helped through the attraction by a couple of guides and it needs each group to clear the first half of the maze before the guide can go back for the next group. Therefore, the queue was slow moving and most children were bored by the time they finally entered the tomb.

Fortunately, once inside,  the attraction provides a number of decent scares which even had a few of us adults jumping at times. Combining live actors and special effects, the first half was excellent, well themed and full of startle scares. Unfortunately, after the halfway escape point (which we saw many children use) the rest of the maze was just a dark walk through of the space used for the Twilight Zone attraction earlier this year. With no actors, no effects and no music, the section was dark and claustrophobic but not as scary as the detailed tomb at the beginning.

Also, the final scare could have benefitted from the appearance of the animal and not just a sound effect, but by that time our children were ready to get out and perhaps any more scares would have put them off going in anything like this again!

Going forward, if they can sort out the capacity issues, this attraction will be a big hit over the upcoming week.
Chessington's Halloween Hocus Pocus is unique in that it provides exciting family fun for everyone, mixed with some quite scary experiences. The park has pitched all its attractions perfectly for the target audience and provides an exciting mix of fun and fear. A group of thrill-seeking teenagers would probably hate it, but those who can appreciate it should see that it is one of  the few events in the country that doesn't patronise children and knows that many of them like a frisson of fear alongside the fun.
To find out more about - visit their website

The Krypt - billed as a family attraction this little scaremaze did a fantastic job. excelent scenery and a few good little jumps it was nice to see such a good atmosphere and such a heavy empesis on the area of the park. a few explorers take you through the tombs and jumgles for small frights and some great acting and even a few surprises i never expected. just the right length and not to scary its the perfect place to make the kiddies jump and the adults enjoy themselves.
Black forest Walk - the worst single halloween attraction i have come across in along while. though billed at familys this didnt even seem like a show. it was a walkthrough attraction with some pretty poor actors, alot of smoke and nothing much more. the vampire at the end was smoking a cigurette as we aporched and wasent bothered. the monk just stood there then slowly closed the doors. the other 2 grave diggeres tryed but with a batched group of 30 people couldent do anything and was starting there scripted parts befor the whole group was in place. a very poor attraction and needs majour improvement.
Hocus Pocus Bewitched - the highlight of chessington is hocus pocus hall. the outside of the atraction covered in cobwebs and lights looked amazing and the witch's roaming around really stured up the crowd and brought a great atmosphere to the whole que. inside there were quite a few actors talking to the childrena and making some pretty good scares for the adults in the droups too. decked out it in all the halloween cobwebs and additions is made for a very enjoyable attraction and i hope to be seeing this again

Also visited Hocus Pocus at Chessington World of Adventures? - tell us what you thought here