When an attraction as big and as seminal as Alien War announces its return, you know that the fan base is going to start buzzing with anticipation. Having experienced a number of different versions of the show, the ScareTOUR crew were as excited as everyone else to see if the heart wrenching terror and chaos of the original show could be repeated so many years later.

Unfortunately we have to report that it’s not quite there yet!

Alien War isn’t a bad attraction, in fact, the latest version is still as good as many other scare attractions existing around the country. It just seems to have got old over time and seems less intent on running around chaotically, than rather gently ambling as if it has a recurring hip problem brought about with age!

But what can we say for definite about the new show?

The story seems to have shifted from an alien spaceship/underground facility (as in previous versions) to a hidden cave full of strange hieroglyphics. Clearly the makers have wanted to include strands of DNA from the latest blockbuster Prometheus to try and keep the alien legacy up to date. The sets are very impressive (and many of them were lifted directly from the set of the latest movie once it finished filming in Pinewood). The combination of styles come together to create an underground facility that seems half space ship/ half Egyptian temple. It’s detailed and impressive to look at but once the alien attacks start, you hardly give the walls a second thought.

Secondly, this is not an official HR Geiger Alien but only the most hardened Alien fans would really spot that. The likeness is remarkable and will leave most people believing that they were attacked by a small alien Xenomorph from the movies.

Thirdly, a lot of the tension and fear created in previous versions was missing. Just about every room consisted of us being lined up against a wall while we waited for something to happen. The Alien attacks were fast and eventful when they occurred but it was confirmed afterwards that further attacks are planned in later versions. Apart from the darkness and a couple of startle scares from the actors there didn’t seem to be the sheer intensity of attacks throughout the show or the insane urge to run for our lives when instructed to, as in previous versions.

Being opening weekend the actors are still getting used to their roles but our corporal didn’t seem to have the edge to create audience hysteria and the misdirected army “survivor” was an actor that could have been put to better use scaring us rather than wandering around lost.

Some of the big set pieces that many people will remember from previous incarnations are there in some shape or form and of course created the desired screams and sacrifices as required. As in previous versions, we are encouraged to run to the door for our final escape!

After we escaped the clutches of the Alien we had a chat with Gary Gllies (the main creator of the show along with his business partner John Gorman) who told us a number of things that put this review into perspective:

Being opening weekend and a reduced preview price, the attraction wasn’t quite finished yet. The venue deliberately didn’t hold a press or media night for the attractions as they knew there were things still to be finalised. There are plans for another room to be added and another 2 full scale attacks will be included. One scene will make much better use of one of the iconic rooms we visited and the extra effects will make passage through the room even more terrifying. Keeping the same running time, these new scenes will force them to speed up the other scenes and will create a faster paced experience throughout. Also over time, the actors will get a better chance to really inhabit their characters and play around with what they can and can’t do within the environment.

We are certain that once these opening weekend niggles are sorted that Alien War will be able to reclaim its crown as the king of scare attractions in the uk. The creators and the venue have invited us back again later in the run to see for ourselves how the changes impact on the show and we really look forward to experiencing the true Alien War. You know, the one that leaves us breathless in a state of panic, running for our lives not just slightly startled and wondering if there is more. 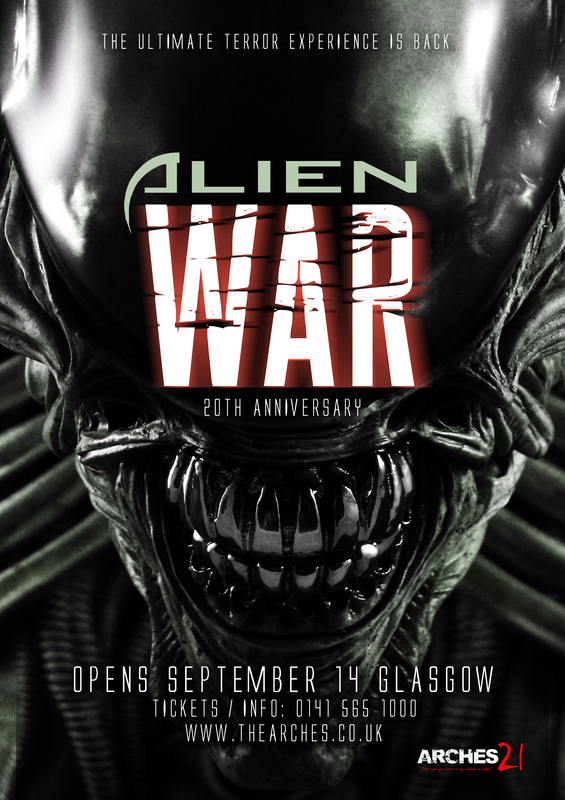 For our history of Alien War feature and previous reviews, click here

A group of 7 of us had the fortune (or not for some of us) to experience the new version of Alien War at it's opening weekend. Having been drawn in by the hype: reviews of previous incarnations, and superbly design promotional material, we were all ready for a 20th anniversary show that would leave us wanting more and eager to tell the rest of our mates (as instructed to do so by the tour guide - corporal McGregor)

Allowing for the fact that the Scottish twang might not be the best way to voice an expert Xenomorph fighter, Cpl McGregor didn't make us feel as his script obviously wanted us too. The sense of urgency was rare, at various points we struggled to hear what was said (losing diction and voice projection on only the 2nd day?) and the Cpl readility exchanging banter with the audience, perhaps added to the loss of realism and storyline.

As for the set - impressive. We had lots of time to admire it. In most rooms we were left against a wall, with that exciting sense of anticipation, waiting for those mini scares that just didn't arrive. The couple of Alien attacks by the small man in the Xenomorph costume were very effective and would have benefited from that increased sense of urgency on all occasions.

There was a nice touch near the end where a member of the group was snatched by the Alien. Unfortunately a plant arriving in your group randomly kinda makes what's about to happen pretty obvious. Would it have been so difficult to have them there from the beginning? And the end itself? Again a bit of a let down and spoiled by the fact that Cpl McGregor had been instructed to flog us t - shirts!

With some decent actors, more scares and enhancement of some of the set (Single strands of material dangling in front of your face just doesn't cut it) we're sure lots of willing guests will see Alien War. The venue is perfect for a scare attraction: Ghosts of Christmas was very well executed there, and we wish Gary and his crew all the best.

"A tad harsh for the opening weekend "- we hear you cry. Yes, we all have theatre experience, and yes the few beers beforehand may have tainted our views, but the faces on the hordes of punters that had gone before as well as the people we met later, all showed a similar opinion. "but it's all changing and getting better later in the run" That just makes us feel a bit duped. Will we tell the rest of our mates? - oh yes. And will we return and see the changes? For £9.50 for a 15 minute experience, probably not.


Probably one of the most awesome rides/attractions/exhibits I've every been to - one of my enduring memories is that of crouching down in a pitch black corridor while a friend of mine whispered 'I'm not sure, but I think there's something in front of me...' - just as the strobe lights kicked in and a xenomorph appeared two feet in front of him!

You really don't know a man until you've had to peel him off a ceiling after he's shrieked like a 6 year old girl...

Such a shame it closed, I would gladly support any revival as long as it stuck to the original vision.So maybe kickstarter funding, jobbing actors and/or cosplayers and a little help from 20th Century Fox and it just might happen again...

Have you also experienced Alien War in any of it's variations? Why not leave us a review? Click here for more details.