After the success of the Bristol event over the last 2 years, it was inevitable that the 2.8 Hours juggernaut would hit the road and find other cities to attack. London has already been lined up for Halloween and a sustained internet campaign has recently seen New York mooted as a potential future city. But first, Leeds was chosen as the new venue and the whole show and concept has been virtually transplanted up North.

When moving to a different city, there are obviously going to be some differences in the flow of scenes due to the city layout, but all the main story points from the Bristol show where there. The Grandad with his infected daughter, the chained up vicar and of course the lone survivor in the shopping centre. What felt different about Leeds though, was that a lot of the walking between safe houses was along densely populated roads, with people out partying for the night. The Bristol show utilised much quiter roads which meant that the zombie threat felt that more menacing and could happen at any time. For most of our journey we were just walking from venue to venue with no fear of retaliation. In fact we only saw "street zombies" at the start of the game and at the end protecting the final venue. This meant we  missed the incredible chaos that we experienced in Bristol when we tried to access the rendezvous point in the middle of a pitch dark park, pouplated by zombies .

Fans of zombie movies and the genre will be pleased to hear that the shopping mall is back and this scene probably had us running the most. Up and down escalators and stairwells trying to find a way to escape  the horde, the mall felt very claustrophobic. Again - not wanting to comapre to Bristol all the time, but this mall lacked the size and maze-like quality of Bristol's Galleries.

It's not all doom and gloom though, as the next location was perfect and it was here that this reviewer eventually got caught. After escaping from an indoor market we were faced with row upon row of market stalls with zombies everywhere. This really was a game of chance and speed as you ran for your life, hoping that your colleagues were drawing the attention of the zombies so you could escape yourself!
As we headed for our final rendezvous we were physically and mentally exhausted,  and it is at this point the game likes to throw in a massive finale. There were zombies everywhere in this final assault and we lost over half the group to the infection. By this point we were ready for a cold drink and we staggered into be processed quickly.

Zombie processing was fairly standard but there is always a tension as you are "scanned" for infection. Everyone hopes that they have escaped, but the sensors never lie and the infected ones are sent to be made up. During this scene, we must mention an amazingly fun actress who kept getting scares out of us, even though the attraction itself was over. She was clearly enjoying her job and creating a great atmosphere.

Included in the full ticket price is a zombie disco where clean and infected people alike can relax with a beer a burger and just recount the madness of the last 2 and half hours. Being at least 20 minutes walk away from where we first left the car and with long drives home ahead of us, we had a quick drink and made our excuses and left.

Interestingly, as we were one of the first groups to be despatched originally, we were able to walk back over parts of the route and watch other people being chased. This highlighted the intense physical nature of the zombie actors who would leave no opportunity to infect a player if they could!


It's difficult not to keep comparing the Leeds show to the Bristol one but inevitably it has to be done. As such, it's clear that the Leeds show is the weaker of the two. In Bristol you really felt that there were zombies everywhere due to the outside nature of several of the scenes and the secluded nature of many of the roads. Leeds had some great indoor set pieces, but most of the time it just felt we were walking from scare to scare as opposed to involved in a full out zombie invasion.

Hopefully the organisers can rectify this for future events.
Links: 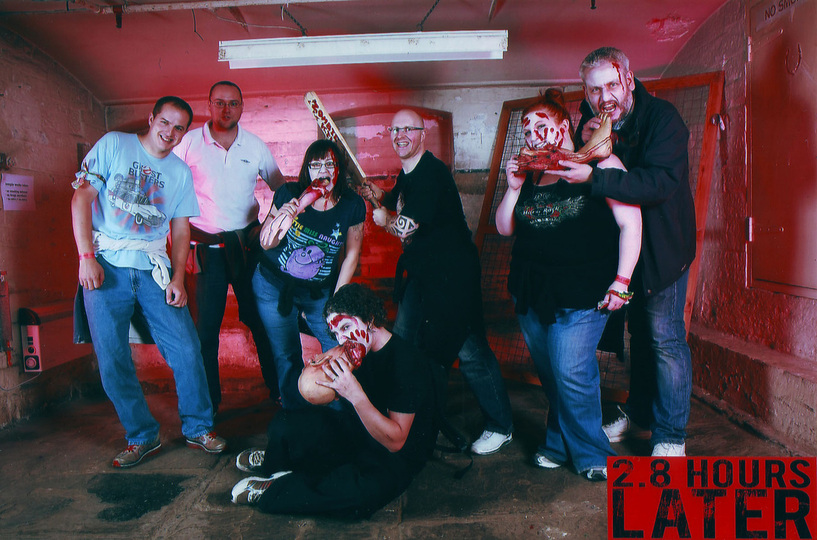 Only 3 of this group managed to survive!

Bit of a virgin to events such as this however it was a good evenings entertainment. Good excercise and a great team game using maps and such to find your way around. Actors were very good and genuinely made you feel part of the games. Locations, especially those indoors such as the shopping centre and market were great as you had little space to escape. Overall i'd say value for money and well organised. Fancy dress next time though I think? :D