Great Yarmouth Pleasure Beach made a big impression with their Fairground Frights in 2021, and this year has seen new additions to the line up. The main difference with this event is that NOWHERE is safe, and the scare actors can go anywhere around the park.  Instead of being allocated a particular zone or area, we saw the diverse range of characters in different places (including on some of the rides.) Also these actors had no qualms about chasing scared children, and all through the night the park was filled with people running away and being chased by one of the actors!

New for 2021 is the Snails and Scary Tales ride, a seasonal makeover of the snails ride that places live actors in various scenes, such as an evil watch, a very angry Snow White and a totally deranged Mad Hatter. The sets in this attraction are beautiful and the addition of the actors really added a great Halloween makeover. Although not particularly scary, we loved the whole Snail ride.

The other new experience is the event's first real walk through scare attraction – The Workshop. Built at the back of the park in an old workshop  building, this maze utilised many old props and signs from the parks past including old roller coaster cars, broken arcade machines and more. The room was full of theatrical smoke and the actors throughout were working hard to get their scares and interact with the guests. We were lucky to get to this early in the night, as the queues built up through the night, but it was the first day of operations and the team were visibly working hard to increase capacity.

Finally – to celebrate the launch of this years event – we were treated to an impressive firework display on the beach at the end of the night. It was a great way to finish a fun night at this unique event. Well done to all involved for improving on what was already a great event to start with! 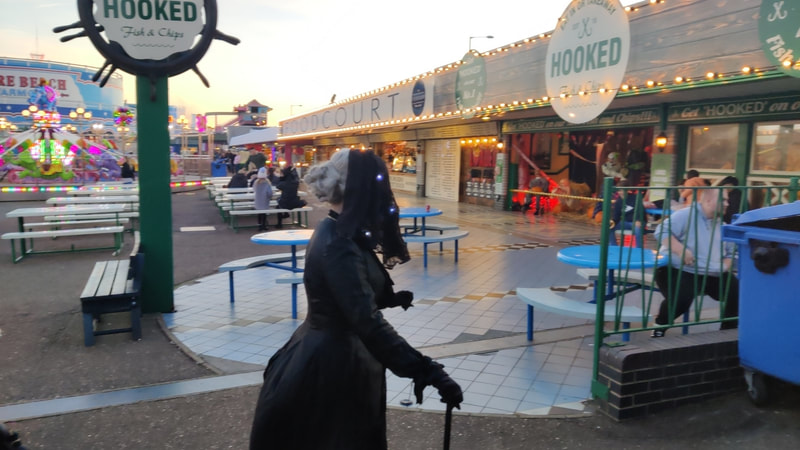 Did you know that Great Yarmouth Pleasure Beach was once home to Sheer Terror, one of the first live scare attractions to open in the UK? You can read more about the history of this attraction here, but after 20 years away from live scare entertainment  - what would the new event Fairground Frights bring?

Well surprisingly the scares started outside the amusement park as we were queuing to get in. The live actors kept coming up to the fence and making people jump, which only got worse when the actors strolled out onto the pavement to torment us all some more.

Once inside, the roaming actors were everywhere and were very full on with guests. As a separately ticketed event - the park don't recommend small children attend, and the actors certainly weren't taking any prisoners. In fact the whole park kind of turned into one massive scare zone, with no areas safe from the attention of the actors. This really created a great atmosphere throughout, which was complemented by the loud music and sound effects around the park, as well as the impressive projections on the side of the Roller Coaster.

And talking of that coaster - we took a ride on it not realising there would be an actor included. It was a great touch and although not even scary, it was a surprise to see him there. Obviously a night time ride on this classic coaster was just one of the highlights of the event.

But of course we were there for the dedicated scare attractions and our first experience was in the Haunted Hotel, which has been plussed for the event with a number of live actors throughout. The ghost train itself has only recently received a large makeover with new effects and lighting, but the addition of the actors really added to the scare factor. The characters ranged from the creepy looking bell boy welcoming us to the hotel, through to a terrifying ghostly appearance in one of the top bedrooms. Unlike other ghost trains, where actors are just placed randomly inside, all these actors in this ride were themed to their location and added some extra theatricality and scares to the experience.

The other converted attraction is the park's fun house which has been renamed into the Not So Fun House. Warned at the entrance that there may be "one or two clowns" inside, we were surprised at just how over run the place was. Normally the fun house involves a number of moving floors and walkways that lead around and down into a central space with fun house mirrors and more. Well for Halloween this central area has been filled with smoke, lights and clowns as we wound our way round the walkways - they were particularly lively and vocal. What made it worse is that we knew we would have to go down to ground level to get out, and as we finally descended, they were there waiting to taunt us. It wasn't the scariest experience ever, but really was great fun, and the clowns managed to get a number of good jump scares from us.

One slight negative we will pick up on is that none of the actors in the fun house or the street team were wearing masks. In the current Covid climate, with them shouting and getting close to people we would have expected the extra precaution to have been made by the event.

But all in - we had a fantastic time at Fairground Frights. and would have loved to have visited in a large group of friends. It really wasn't the most terrifying event we have experienced this Halloween, but the park had done a really good job of creating a halloween party atmosphere around the whole venue. With the threat (promise) that they may even bring the classic Sheer Terror back in the future - we cant wait to see where this event goes from here!