Since our last visit to Xscream Escapes they have had a bit of an internal shuffle, to make room for a new game. Bedlam has been updated into Block 29, and the large (and more importantly) high roofed room at the back of the venue is now home to The Watcher.

The background story for this new experience is very apt in these modern days of social media, and asks the quite simple question - what WOULD you do to get more likes? Without a second thought for our safety, we were blindfolded, handcuffed and led into a darkened room to find out.

From here on in - the experience started as a pretty standard escape room - search the room, solve the puzzles, and gain the likes, but with The Watcher taunting us throughout, the game soon took a darker turn as individual "challenges" were added to the mix. We don't want to spoil any of the tricks, but if you are the chosen one for some of the games you really don't want your team mates to get the answers wrong!

As the game progressed, more surprising areas opened up in the room, and the impressive theming and set design around us revealed a number of surprises that we hadn't expected. The team have clearly made use of the previously mentioned ceiling height in this room, and in one particular stand out moment, make terrific use of this. We can't say what this highlight was, but it was definitely one of the most elaborate (and scary) moments we have ever experienced in an escape room.

As the countdown raced to zero, we were left with one last life changing decision to make, which left some of the team happy to escape and collect the required number of "likes"  yet guilty for the way in which it was achieved and the sacrifices made. This clever twisting of the narrative really added to the overall immersiveness and realism of the whole experience.

All in - we had a great time in The Watcher. The experience is a genuinely thrilling mix of puzzles, practical games, special effects, and scares and had us on edge for the full hour. The game will definitely keep you guessing throughout and is a perfect room for fans of horror themed escape experiences.

Our first experience was the asylum themed Bedlam, where we were locked in the cell of one poor patient. As the door shut behind us, the introductory video clicked in and our quest to escape had begun.

Clues and puzzles came thick and fast and were mostly linear in their execution, with each solved puzzle tossing up another scenario or surprise. The puzzles were a great combination of padlocks with keys and combinations, as well as lots of physical elements that needed us to place things in certain places. There were also some fun practical elements (even if the younger members of our team didn't quite know how to operate certain pieces of old technology!)

The game also had us running backwards and forwards between rooms, which really helped create the tension and panic that we weren't actually going to get out! Towards the end, we weren't even watching the clock so we were surprised that we got out with about 14 minutes spare. Certainly our last batch of puzzles were all frantic, as we all worked together to solve the final clue that would unlock the door.

All in - we loved the immersiveness of this room, which along with the background story, special effects, sounds and more, made for a totally creepy and believable experience, and one we would definitely recommend. 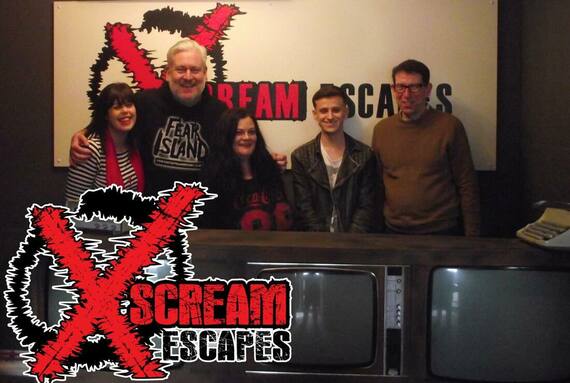 Within a few minutes of escaping Bedlam, we quickly found ourselves locked in a grungy garage, which had clearly seen some action from the local serial killer. Only on a ScareTOUR day out, could we be so careless to get locked up in dingy places so easily!

What was clear about this room, is that there was a greater reliance on padlocks and combinations, which to be honest suited the theme of the experience. You really could imagine a serial killer using multiple padlocks to hide his secrets, and as we progressed through the rooms we had a genuine sense of achievement as we got closer to our final goal.

One of the key things in this story were the multiple scares throughout. The team seemed to know just when we were most distracted by a puzzle and would hit us with some simple scare that usually had us jumping and screaming. There were also some really nice touches throughout (don't look in the fridge) and a great use of practical effects that didn't necessarily look like puzzles from the outset.

We got really tense in this room and had a real sense of urgency throughout. Usually we stay quite calm in escape rooms, but at one point, two of the team were on the floor arguing about a very simple puzzle! But generally we worked as a team and surged through the multiple locks, puzzles and games, discovering more and more things that needed our attention. We only actually needed one clue from the gamesmaster right at the end, which was when we had the method of escape, but had missed one small element hidden in the room to actually make it work. Saying that - we still got out with just under 15 minutes spare.

Having done both rooms back to back it's really difficult to say which we preferred the most. Both had engaging stories, unique puzzles and totally believable sets and theming. Maybe you should do what we did and do both rooms in one visit? Whether you decide to do that, or visit each room separately, you'll be guaranteed to have a great time.