Despite the fact many events have opted to remain closed in 2020, Twycross Zoo launched their ‘Horrors of the Wild’ event, offering a scare attraction with a uniquely wild twist. The creatures that lurk within the zoo aren’t zombies or clowns, they’re animalistic predators and poachers. Given how original this concept sounded, we simply couldn’t turn down the opportunity to give it a visit.

The moment we stepped foot into the park, it was clear the zoo setting was a real hit. We haven'tseen anything like it before, and it turned out, that just walking around a darkened empty zoo is quite a terrifying experience on its own, even without the actors. Thankfully this was the case, as the first 5 minutes of Horrors of the Wild were relatively uneventful. We encountered a couple of actors offering rather timid interactions in comparison to most of the other events we have visited. It was a shame to see this as they were clearly trying hard, but it seemed like they hadn’t been given the necessary training or direction to nail their performance. This was only made more frustrating by the fact that as of then, we had barely seen any poaching storyline.

Thankfully, things started to pick up once we’d delved deeper into the zoo. Whilst the initial section of the experience was relatively open and featured very little theming or plot, all of a sudden, we were in dark wooded areas that felt more tropical and befitting of the theme. There was a nice variety in scenery and we felt immersed in the dense foliage that surrounded us. This was when we started seeing references to the plot with some fantastic theatrical interactions with some gruesomely horrific poachers. We must praise the butcher in particular, who drew us in and engaged us with his performance. His constant references to the way in which he obtained his bush meat was genuinely disturbing. Moments later we were aggressively pounced upon by an intimidating poacher, threatening us against stealing his fresh supply of ivory. We loved seeing such strong scares of both the impact and theatrical nature after what had been a slow start.

For a good 10 minutes, as we were looping around the back of the park, we had a solid series of scares hiding within the foliage. Whilst there were certainly some misses, such as the cheap plastic animal masks used in some scenes, most of these scares genuinely caught us off guard and gave us plenty of frights in the savannah. This section alone made the visit worthwhile. These actors certainly seemed to be working as hard as they could to get scares, swinging away with their machetes vigorously. There was one memorable moment where we were consecutively attacked from multiple angles by three separate actors. The pacing, and intensity delivered by these three actors was perfect. If only this had been the approach throughout the rest of the experience.

Regrettably, from this point onwards the scares started to tail out. As soon as we entered the lemur enclosure the dark atmospheric pathways were gone, only to be replaced by vast open spaces with few places for actors to hide. This  affected the scares, given we were able to see most of the actors before they were anywhere near us. It’s a shame, as there were some really good concepts here. Our encounter with a poacher threatening to set his dogs on us down a long foggy tunnel was particularly atmospheric, given we could just about work out something lurking in the mist. It’s just a shame that the majority of the actors in the final half of the attraction lacked this level of impact. The worst offenders being the chainsaw horde, who were certainly doing their best, but considering they were using what sounded to be toy chainsaws (complete with tinny sound effects) they really lacked the desired impact. We were especially disheartened that this attraction lacked any form of finale, with very few actors lining the final stretch. It felt quite anticlimactic given how intense the middle section of the experience had been.

We certainly enjoyed elements of the experience, but these moments were too few and far between, with swathes of the experience offering little in the way of atmosphere or scares. Due to the fact there were no additional theming elements, sets or lights added to the zoo for this event, some of the areas lacked any form of atmosphere. It’s a shame as given the promising theme, the park could have come up with some very interesting set pieces, which sadly weren’t there.

However, our main issue was with the inconsistency of the acting. We came across some ridiculously talented scarers, who energetically taunted and trailed us totally in character. It’s just a shame these actors seemed outnumbered by those who needed more direction and force behind their scares. We noticed that because of this, a lot of the scares became more generic as the night came on. The poachers which traumatised us in the middle were replaced with generic blood splattered actors who merely screamed at us as we walked past. Using the setting of the zoo was such a stroke of genius that we feel a lot more could’ve been done to make the most of the unique setting.

Regardless of the critiques, we were certainly glad we got to enjoy this unique new experience at Twycross. It’s definitely a seed of a good idea, it just needs more nurturing to become something more polished and consistent. At the moment it’s still quite rough around the edges. However, we seriously hope Twycross keeps working at the concept and invests in its future, as we can certainly see this becoming something rather spectacular a couple of years down the line. We must stress how much potential there is in this event! Despite leaving disappointed there was certainly a lot to love about this event. We can’t praise the middle stretch enough, it really was that good! We just hope in future years the park can expand the concept outside of that singular section and truly uncover the horrors that lurk within the wild. 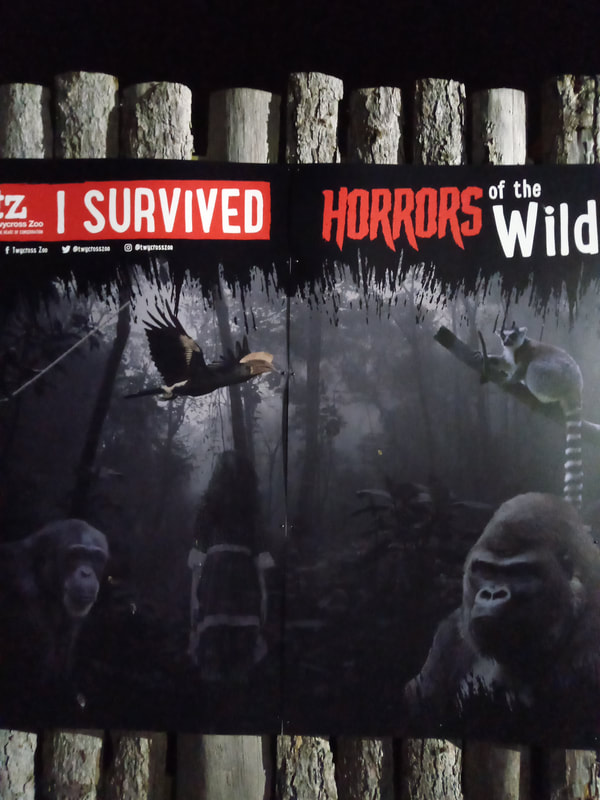 Very scary
It was was pleasure to visit this event with Horrors of the Wild being a thrilling first attempt by Twycross Zoo, it had scares, Creepy characters and fun to boot, it started with a monkey like girl, the mask was amazing and from the moment we walked past the first part we was sent into a panic when a girls face bloody locked in the kiosk was screaming trying to warn us

The cold and the feel of walking around the zoo at night gave us chills it was frightening with live animals noises coming from the dark. About 10 minutes into it we came across a light, the closer we got to it we could hear singing, the only words we made out was total slaughter, we were that nervous of passing it took us some courage to pass, when we saw it fully we were now before a butcher covered in blood, the stand was littered with very realistic props and the butcher himself was try to sell us a young Zebra heart, to our shock the heart and liver was real the smell was fowl as the butcher beat the meat to tenderise it and then made us cringe as he smelt it close, it was wonderfully disgusting, this was one of our favourite parts.

As we travelled further in the dark with only our torches to guide us we were set upon by a butcher with a knife who thought we looked like good meat, escaping him the wind started to pick up and we seemed to walk into a frenzy of poachers hunting and with actors playing rangers that had been set upon and attacked. We pushed through this and thought we were safe when we're set upon by a man with whose head was a giant pigs head, we move quickly to then be set upon by a man with a chainsaw, we didn't look back and ran.

Our next area we were able to purchase some food which I thought was excellent like an interval on the walk, we ate our food and then entered what I know to be the Lemur cage in here Poachers we're everywhere seemed we disturbed them taking the trees, there we saw 2 girls who were dressed as twins, this was mega creepy, and then we came across a really tall guy who looked like he really wanted to take our head off with his chainsaw his face was very badly scarred, he looked awesome. Once we left the cage I embarrassingly slipped on some mud and sat in a puddle but that didn't dampen the mood,

Carrying on the path we came to a tunnel where we were getting questioned by a man, a poacher I think with a mask that was bloody, he was very heavily tiger hunting, we then walked into the tunnel towards smoke which was definitely from a smoke machine, but before we went into it we were startled when an actual tiger ran past our face and then jumped onto the roof of the tunnel then over, it was such a unique feeling. We had walked under and next to a tiger attraction. Going through the smoke to the other side we were made to scream by another poacher surprising us.

Walking along we came to an area where a ranger was being pulled away by a poacher, we went into what can only be described as a total frenzy, characters of a man with a giraffes face beaten and bloody, masked Poachers, a tall man in a white coat with a baby looking mask that looked something very disturbed indeed and another Pigs head, just a full on frenzy of scares and jumps.

​We had been in the event for 1 hour and 26 minutes with about 10 minutes where we ate food. This was an experience that was better not only for its hard working actors and the Zoo themed location but for its ability to continue its energy from start to finish compared to some other events which just try to get you in and out in a 2-10 minute period, Horrors of the Wild offer that extended suspense and worthwhile experience. Be interesting to see if this does continue to develop or what else they could explore. Look forward to a possible 2021 event well done Twycross Zoo.