Tom Spindler Presents first launched themselves onto the scare scene in 2008 with the terrifying Asylum Hill in North London. This innovative scare attraction broke so many boundaries as it dealt with some very adult scenes including sexual assault! Everyone who experienced this knew that they had witnessed something that would probably never be seen again, and nothing the company did after this, was ever quite as shocking. Tom Spindler Presents  certainly knew how to make an entrance!

Black Cat, the next attraction was a master class of beautiful design and broke all the rules in relation to defining a route for guests to follow. Once inside you could roam anywhere you wanted to explore the different elements of the story. Although less scary than Asylum Hill, the attraction mixed theatrical performaces along with some impressive scares. The corridor of bodies being a particular highlight as well as the amazing looking room of illuminated bottles, probably the most atmospheric scene ever witnessed in a scare attraction!
After the more theatrical performance of Black Cat, Tom Spindler Presents  returned to its roots and restaged Asylum Hill in a different venue. Eschewing some of the more delicate sexual issues from the first show, this new version still managed to shock and scare people in equal measures. It was clear that Tom Spindler Presents was maturing as a production company but who could have anticipated what would come next?
With three attractions under their belt, Tom Spindler Presents then launched the attraction that they will be most remembered for. The operation dates for Masks meant that everyone attending ScareCON 2009, got to witness the show for themselves first hand . This was probably the most twisted yet sometimes the most traditional of all the attractions to date. Generally, there was one route round the venue and many scenes contained the usual  mix of smoke, strobes and loud noises ( the strobe room was a masterpiece of intensity with some of the liveliest scare actors ever witnessed). But the real highlight was the banquet scene. EVERYONE who went through Masks had different experiences to share of this room, from utter revulsion and fear to laughter - it was a scene that will go down in scare history!
Their last production appeared during 2010, and was probably the nearest they had ever produced to a standard scare attraction. With a set route around the venue and all the regular scare features, The Thirteenth Seance was populated by an army of insane creatures round every corner. Surprisingly, it was their only show to operate during the Halloween period, showing that Tom Spindler presents were one of the originators of one off and unique out of season shows.
With the closure of the Seance, the health of Tom Spindler productions started to decline with only sudden sparks of light when announcements were made about a possibble new attraction. It looked like the company had gone on  hiatus and we all waited for Halloween and a potentially huge announcement.

It was then a shock this week to discover that Tom Spindler Presents was on its death bed and we were called to witness its final moments. In a final interview, Tom Spindler Presents croaked that it had been fun and was proud to have made such an impression on the UK scare industry, thanked us for attending every one of their events and then silently passed away. 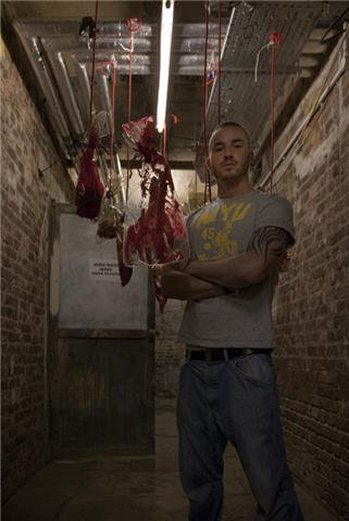 If you have any comments about this article or want to share your experiences at a Tom Spindler Presents attraction, why not join us in the Scare Forum?


All pictures on this page are copyright Tom Spindler presents and have been used with permission.