With live theatre and Immersive indoor experiences still on hold due to the Covid lockdown, Secret Theatre have embraced modern technology to bring a new immersive horror show, that can be experienced live in your own house.

The basic premise is simple. Six "celebrities'" have all committed some pretty heinous crimes and have agreed to enter the Redemption Room game show to try and seek redemption and a large cash prize. In the run up to the live broadcast, the audience are able to engage directly with each of the characters via email, and we certainly took advantage of this opportunity to learn more about each of these people. If we were to play judge juror and potentially more, we needed to probe deeper. What impressed us, was how genuine and real these conversations were and that they clearly were not just cut and paste answers!

Once in the main Zoom itself, we were greeted by our creepily charming host Rex Shakespeare and advised that we could continue our chats with the characters throughout the show. As he introduced the main players, live votes were presented to gauge the audience reactions to the crimes they had committed. As the votes came in we could interact with the players and the host and steer the direction of the narrative.

What then followed an hour of extreme tension as things started to spiral rather rapidly out of control. We really don't want to say too much, but some of the jumps, gore and scares that occurred, were as impressive as a Hollywood movie. Even now looking back - we were amazed at just some of the breathtaking in camera effects and tricks that moved the story at a pace. The effects were just part of the story, as the disparate actors were all totally believable whilst juggling a live performance element across multiple locations around the globe. This paired with the intuitive use of technology throughout, created a nerve shredding experience that genuinely unsettled us, especially when we started to receive personal text messages DURING the show!

Like any good immersive theatre, Redemption Room really works best when you engage with the show and play along with the  characters. Having spent time talking to them in the run up to the show, it was even more devastating to see meet their fates in such dramatic ways. Although unlikeable for the sheer crimes they had permitted, their personalities shone through and reminded us of how the "cult of celebrity" can cover up any kind of sin. You only have to look at the current spate of celebrity's breaking lockdown rules and getting away with a simple "sorry" on Twitter.

Of course being a live show - there were plenty of references to Covid and lockdown which made the whole thing feel current and topical. We are all used to having conference calls with friends and work colleagues via Zoom, so to see people suffering live down the medium you usually talk to your parents on, was both unsettling and scary!

We really weren't sure what to expect from Redemption Room, but this performance far exceeded any expectations we could have had! It was technically perfect, well produced, thought provoking, terrifying and funny. Well done to everyone involved for pulling off such an impressive feat. But if I get any more texts from you I'm changing my phone number immediately! 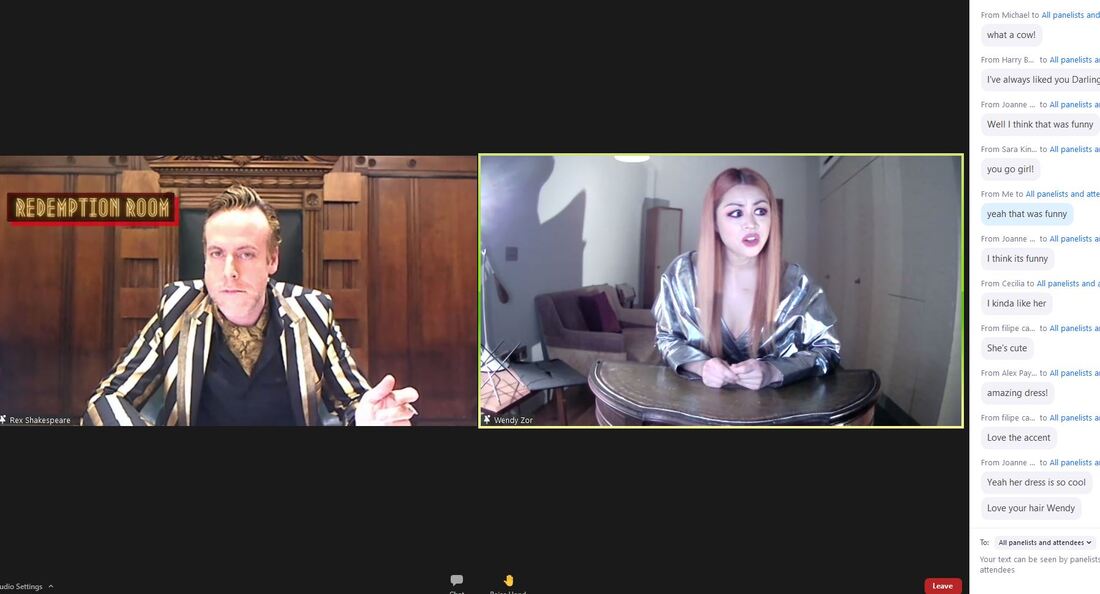