When Road to Hell was forced to cancel this year, due to licensing issues, Area 51, the creative team behind it decided to focus their attention on a new venture instead. Therefore with only a few weeks of preparation (and a lot of hard work) - Satan's Slammer was spawned.

As we approached the large horse barn/stable holding the attraction, the air rang with the sound of chainsaws, screams, loud banging and raucous sirens. It was a truly intimidating prospect as we waited outside, and we nervously wondered what we would be about to face in what was being billed as the "UK's most intense scare attraction"

Once separated and split into different cells, the noise inside the barn was even more chaotic than it sounded from the outside, and we set about trying to find a way out, and avoid some of the crazed inmates locked up with us. Everywhere we went, the actors were able to get really up close and personal, and the aggression and threat from all the cast was palpable as we made our way through the prison, avoiding the searchlights and trying not to think what was waiting for us in Cell 666.

As the show continued some more theatrical style shows played out which just highlighted the crazy nature of the inmates and staff at the Slammer. The chef tried to forced us to taste his mashed potato, eventually covering us in boiled cabbage and other food parts. A weird warden seemed to be going through some kind of episode and was shaving his face with shaving foam and a chainsaw, and in in a big set piece - a group of devil worshippers sacrificed a victim right in front of our eyes as a 8 foot Satan observed from the from his throne. Of course - something happened to reveal our hiding place, and soon everyone was out to get us and we were chased relentlessly through the multiple cells and cages of the attractions.

Once finally cornered - we were faced with only one way to go - and that was into Cell 666. What was on the other side of the door? We really cant tell you - but it was one last great mind game before Satan let us escape for good!

All of the actors  in Satan's Slammer were extremely lively and aggressive and this really gave the experience a real edge in terms of tension. We loved the chaotic nature of the experience, and had multiple scares throughout our tour lasting about 20 minutes.

After the show we were lucky enough to go up the main watchtower and look down on the maze from above. Built mainly from stable walls and cages used for keeping horses safe, the attraction was a simple design but created a totally believable area. The walls felt like a mix between a real jail cell and a slaughterhouse - which really added to the atmosphere and story of a house of demonic correction.

All in, we loved our time in the Slammer and had a number of great scares throughout. It's amazing that a show of this quality was turned round in such a short time, and the team must be incredibly proud of what they have achieved. As such - we really hope that this venue continues to host Halloween events going forward, and that we see even more of the Slammer next year... 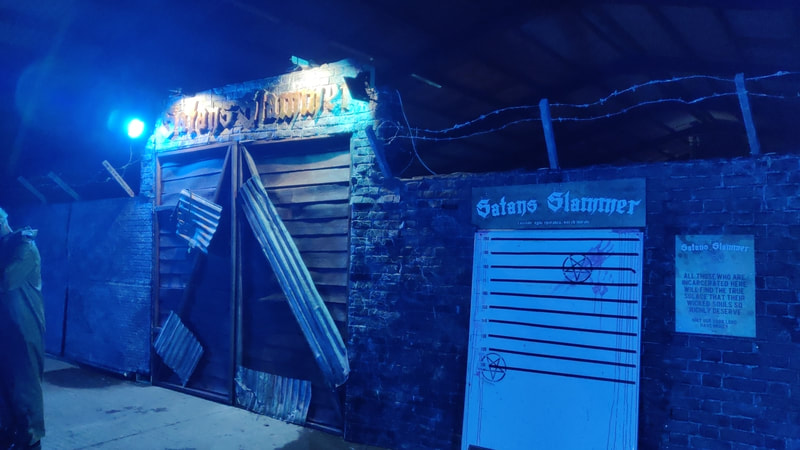 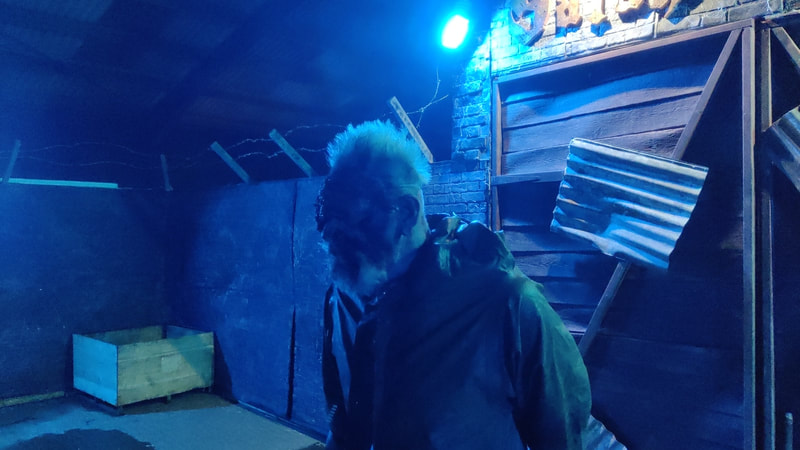 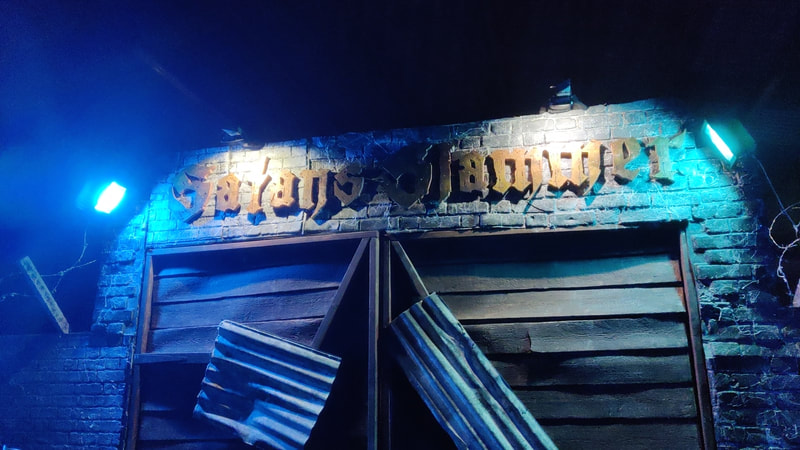 ​Terrifying - After visiting Satan's Slammer, I have a feeling it could be a strong contender for my personal favourite scare attraction of 2021!

We travelled an hour and a half, wondering if it could potentially be a wasted journey for a 20 minute attraction, but it was well worth it for something a little different, and just what we needed to lift our spirits after a disappointing 2 days at Alton Towers' Scarefest.

Batched in a group of 8, we were put in holding pens and introduced to a character that was both creepy and highly entertaining before going into the attraction. From outside, I wondered if it would be particularly impressive, but looks were deceiving, and as soon as we entered the inside of the attraction, we were transported to another world.

The use of space and stable features throughout was fantastic. Set dressing was impressive, and I feel as though you'd need several runs through in order to truly appreciate all the little details in here. I always try to take in as much of the theming as possible, but there were so many signs and other things to read or discover in here that I'm sure I must've missed a thing or two while trying to pay attention to each of the actors.

The props, costumes, and makeup here are some of the best I've seen in all my years of visiting scare attractions. My dad and I were staring at corpses for some time trying to determine if they were actors or props they were that realistic. The prison guards with their light up eyes were legitimately intimidating, and some of the masks towards the end had me uttering words of disbelief out loud. Makeup was also more detailed than I've seen in many attractions, with some actors wearing repulsive facial prosthetics.

We wondered how much of a story would happen here, and were overjoyed to discover that Satan's Slammer has some fantastic set pieces, such as the scene with the kitchen, the medical room, and the ceremony. The actors throughout were brilliant, with some really standout characters.

The energy was akin to the chaos of Psychomanteum, without the nudity. Described as an extreme attraction, I feel as though Satan's Slammer delivered in that respect, as it definitely felt more intense and threatening than many other attractions I've experienced, with actors not being afraid to get a little hands on, something I've missed in recent years since it automatically ups the adrenaline when that physical barrier is broken.

Considering the price as well, I would say Satan's Slammer is more than worth the money. We left thrilled and highly impressed. Definitely give it a go if you can!

The following contains more in depth, slightly spoilery content regarding my personal experience of being separated from my group in the attraction.

The actors were giving it there all, both terrifying our group and making us chuckle here and there. I also had the pleasure of being separated from my group, something I always find ramps up the adrenaline in an attraction. I thought I had survived the initial separation by sneaking back to my group, but much to his credit, the actor who initially lead me away noticed and dragged me back to isolation in a cell with a very creepy actor with a mallet. I never quite know how to react in scare attractions. I tend to be a giggler as opposed to a screamer, but when separated, I often just clam up. In my head, I want to play off of the actors, but I don't want to ruin their night by being awkward, and so I tend to just go with the flow and do as I'm told!

I did wonder how long I was going to be in there, a sense of foreboding beginning to build as a guard arrived on the scene. Despite the warnings of this being an attraction of a more extreme nature, I hadn't expected the guard actor to be so intimidating as he entered the cell, looming over me before proceeding to shout in my face. Being a veteran of these sorts of attractions, I wouldn't say I felt scared, but I definitely felt threatened as he continued to berate me, calling me a little bitch; something I haven't encountered since a run in Psychomanteum years ago!

Great interactions with actors are something I adore, so my head was in a state of both panic and elation at the scene which was unfolding. I thought I would be let out after that, but no, I was locked back in the cell, and when the next group entered the section of the attraction I was held prisoner in, I began to wonder if I'd actually find my group again. I didn't know if I was supposed to break out or just wait, but was eventually freed by my creepy, mallet-weilding cell mate. Cautiously, I made my way to the last location where I lost my group and was filled with a genuine sense of dread when the same guard who cornered me in the cell spotted me. I was afraid of being put back in that cell, but the actor was far too terrifying to run past or ignore, and so I approached as commanded for further admonishment before finally being sent to rejoin my group.

There's just something very special about those personal moments when they happen to you, and for me, they make an attraction unforgettable. Amazingly, my dad said I didn't miss too much during my absence, just managing to catch the end of another set piece enough to piece together its story.

It's not often that I feel legitimately intimidated in a scare attraction, but the actors of Satan's Slammer managed to get my heart racing. All in all, this is an attraction that will stay in my memory as one of the greats.