We first heard of Zombie Encounters when they quietly opened a number of experiences on the South Coast last year. Unique venues such as Fort Widley and Burseldon Brickworks were perfect settings for their story led  zombie survival experiences. Therefore when the team announced Zombie Town 1888 we were surprised at the period setting, after all – who has ever heard of Victorian Zombies?

The Milestones Museum in Basingstoke is a period recreation of a Victorian town, with life-size replicas of buildings, original vehicles and more. It is a huge educational celebration of the past and once guests have stepped through the main doors of the large aircraft hangar style building, it really is like stepping back in time.

For the Zombie Town 1888 event, the team have created a new story that utilises the impressive setting and explains clearly why there are zombies in this museum. In a clever twist on other horror events, ZT 1888 acknowledges that it is set inside a Victorian museum and that by using patented technology, they have been able to create a whole staff of “reanimates” who can be trained to do some of the simplest tasks. Obviously these trained reanimates are a great way to save staff wages, and by making them completely subservient, they are cheap and effective labour, that can work without breaks. So far, so altruistic!

So for the first half of our adventure we were given a guided tour of some of the exhibits and a chance to witness these reanimates working up close. The use of white masks over the actors faces to “hide the inevitable palour of death” added a creepy element to the show, as we watched these white masked people in Victorian costume go about their simple chores.

Now of course – we’ve all seen Jurassic Park and/or Westworld – and everyone knows that potentially taming such dangerous creatures can lead to chaos. So when the army chief escorting us, starts to take liberties with one of the creatures, it is no wonder that things start to go awry. Within minutes, we are crouched down hiding in the darkness of a deserted pub, while blood thirsty zombies strive to get in! The only way to get out? Pull a Sean of the Dead style manoeuvre and walk past the zombies pretending to be one of them. As more and more of us tried this ploy, the zombies got angrier and angrier, with the last few members being chased through the door. It was definitely time to get out!

The rest of the experience then involved being led round the town and through the buildings trying to find a way out. This often involved splitting as a group, or certain people being sent off on reconnaissance missions to find the best way to go. Accompanied by just the aggressive army chief and the blundering Dr Davenport, our chances for survival were pretty slim, and after each escapade we would re-convene and make sure our group was still intact. The use of role calls throughout the event became a tad repetitive, but we managed to evade the grasp of the zombies for the most part. Well, until we were chased scrambling upstairs and out the building as part of the finale!

Despite the dash upstairs (and the excellent use of the lift which spewed forth more zombies) the finale was probably not as intense  as we would have preferred – especially as we could see the museum staff just sitting there bemusedly watching us. We spoke to the team after the event and they said that they would add more to this finale on its next run through (we were part of the first group re-experience it and like any event it will evolve over time)

All in – we really enjoyed Zombie Town 1888 and it was great to see zombies used in a different context. As we said, the “theme park gone wrong” storyline worked perfectly for this venue and it was really unique to be chased by zombies in Victorian clothes! Hats off to all the team involved for trying something so very different and entertaining.
​ 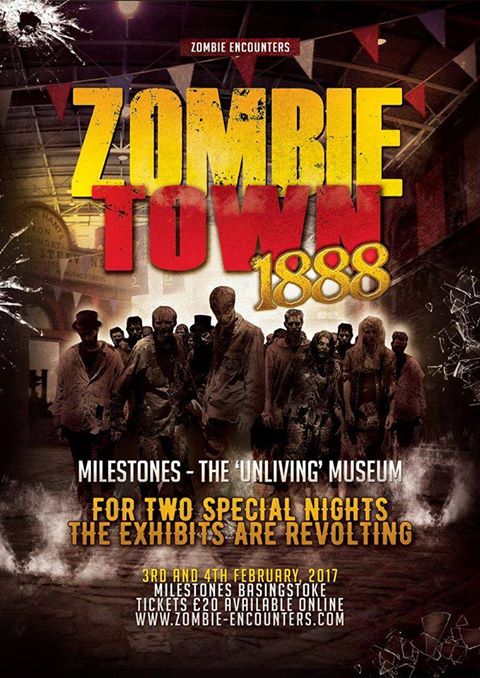