With so many zombie themed events around it's sometimes difficult for one to stand out amongst the crowd, so Zombie Revolution have tried to so something different. With each zombie plugged into a pre-recorded MP3 soundtrack, this was more of a zombie flash mob than a horror event! 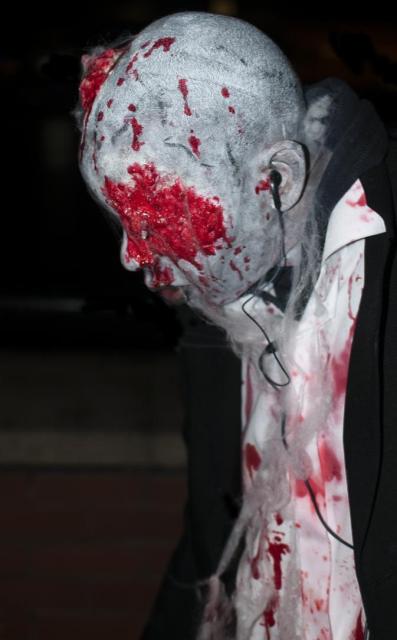 As zombies started to gather outside the Tate Modern,  they were directed into the cafe to get a zombie inspired beverage and check the MP3 downloads worked in preparation for the revolution. At 7.30 an announcement was made and all zombies were asked to count down from 10 and then all press play on their MP3's. A narrative explained the reason for the revolution- a need for zombie rights! and that they would march on Westminster to demand the Prime Minister for them! Zombies then proceeded to lurch along the South Bank, stopping at various points to take part in synced actions leaving the public wondering what an earth was happening!

Along the way they did such diverse activities as hiding and tiptoeing to the Mission Impossible theme tune, snarling, lurching, walking backwards, lunging, flexing muscles and posing to Madonna's Vogue as well as a small bout of zombie zumba! The tasks were completely random at times and the site of hundreds of zombies doing something completely different left most tourists wondering what the hell was going on.

Its hard to describe some of the silliness so why not check out the official YouTube video:
Everyone had great fun being part of the revolution and although nothing really scary happened - it was a great bonding experience for every zombie who took part! Remember - Zombies have rights too!

Also experienced the Zombie Revolution? - tell us what you thought here