Review - Zombie For A Day Experience at London Bridge Experience

Have you ever wondered what it would be like to be on the other side of a scare attraction? We all love going through and being scared, and we know many of our readers are experienced scare actors themselves, but what about the people who have never acted before?  For some – the thought of going through auditions or publicly performing may be as terrifying as visiting a scare attraction itself, but with London Bridge Experience’s Zombie for a Day experience, you can give it a go for just one day!

Here at ScareTOUR we have acted a number of times in scare attractions across the UK, but for our recent LBE takeover, we decided to do the full experience, which is why at 10.30 on a Saturday morning, we were sat in the green room, with all the other scare actors, ready for a full day of work.

Our first task was to find some generic zombie style clothes from the copious rack of costumes. They have everything from Dr’s to clown's outfits, all ready to be selected. Knowing that we would be running around very soon, we settled for loose comfortable and torn clothing (nothing too heavy to restrict movement!)

To help the realistic conversion, we were treated to an extensive special effects makeover, and as the different substances were applied, the team explained what the different products were and the effects they achieved. For anyone interested in horror make up effects it was a great introduction to the topic and everyone was very knowledgeable and friendly throughout.

Now transformed into a pack of hungry looking zombies, we needed to know how to act like one! We went into the Tombs and our guide gave us some excellent pointers in the different styles of zombie, as well as a chance to practice our scare tactic and create some scary sounds and movements. We will confess – it is somewhat embarrassing to act as a zombie with your friends watching, but this breaking down of social barriers is an important part of being able to act confidently in the Tombs. All too soon, the first group were in and we were set to attack.

The feeling of relief when we saw people actually recoil from us in fear was palpable, and as more and more groups came through, we became more confident of what we could do in the space. Throughout the day, our host took us through all the different areas of the Tombs, to try out different scare tactics and effects. Working (and moving) in a heavy strobe room proved quite difficult to master, and we must all admit to having trouble firing up a petrol driven chainsaw when required! We also did a few rounds as killer clowns in the circus themed part of the maze for a completely different style of acting!

One of the key things most people probably don’t realise about the London Tombs is the sheer amount of short cuts and hidden doors there are that the actors can use to their benefit. Whenever we spotted someone, we recognised in one of the earlier scenes, we were able to chase them through the maze, sometimes scaring them up to 5 times. In addition, as we were a gang of four – plus Leanne our guide, any scenes with us in generally became quite chaotic and packed with scares!

None more so than the finale room with the butcher. By the time the guests had endured a full experience through the catacombs, their visit was finished off by a horde of hungry vocal hillbillies with chainsaws just desperate to eat them. We certainly left every group running up the stairs to the exit and we swear the screams could be heard across the street in the nearby station!

All too soon, our time was up and we sat back in the green room scraping at the liquid latex and trying to get the fake bloodstains off. A pile of dirty baby wipes later and a quick face wash in the sink and we were thrust back outside into the daylight, as if nothing had happened. We emerged, blinking in the sun, wanting to snarl or rage at people as they walked past but realising we were just human again, and people would think we were mad. Nothing left to do then but go for a long cold pint!

For more details of the Zombie for a Day experience at LBE – check out the link below or call their group booking www.thelondonbridgeexperience.com/groups/zombie-for-a-day/ 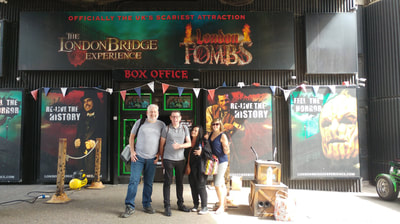 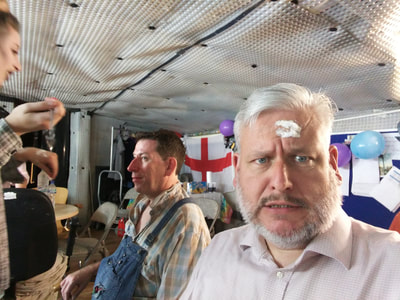 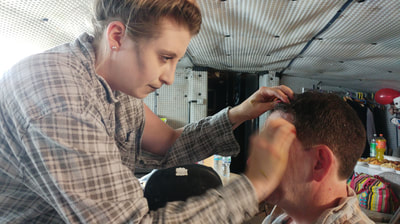 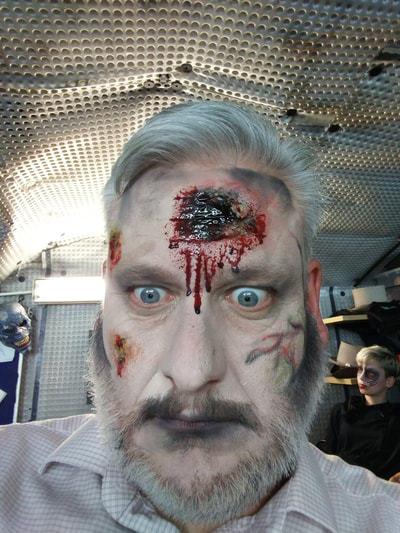 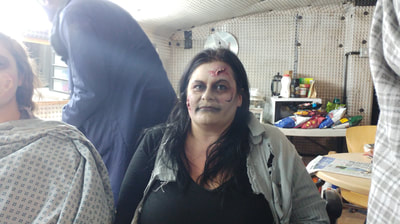 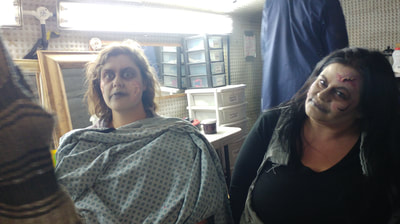 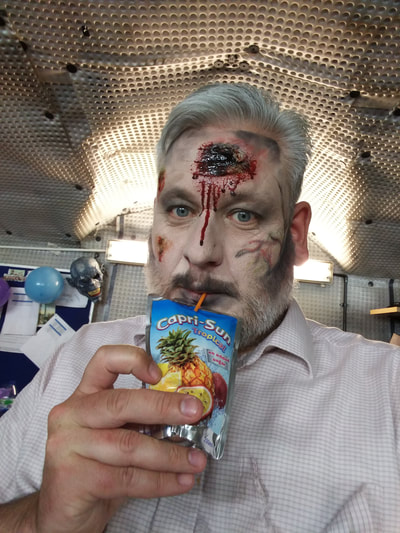 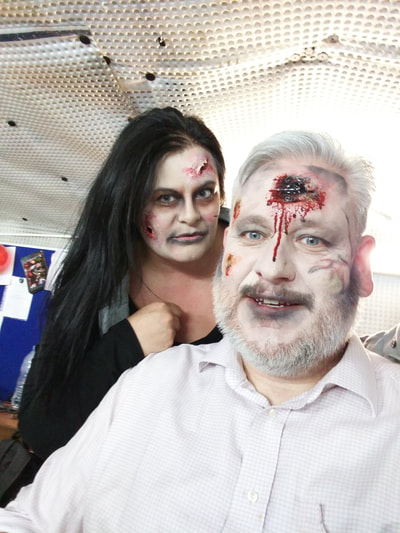 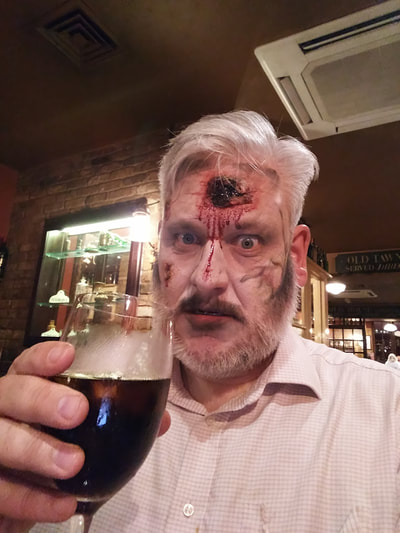 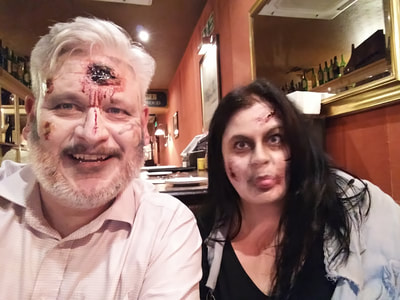 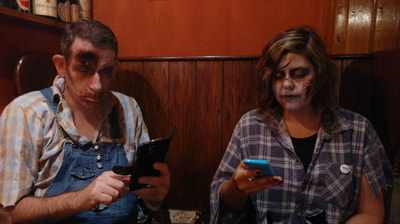 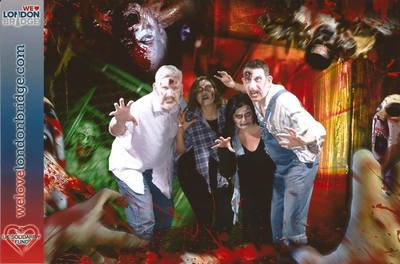 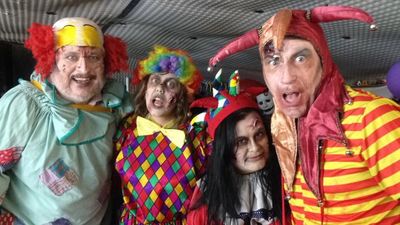 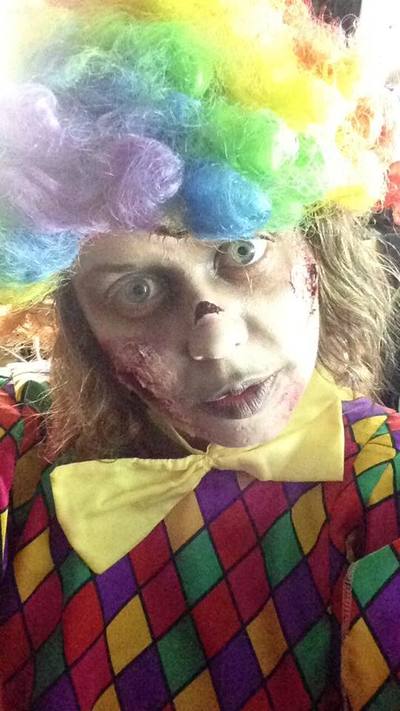 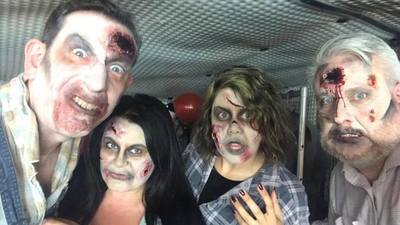