“Do you want the normal version, or the ramped up version?”
“Normal is fine thank you.”
“OK, ramped up it is!”

When you’ve been sat in Icombat’s impressive venue watching players come out of the Apocalypse experience covered in sweat, you know you’re in for some fun. But, add the above conversation alongside events2scare.com (the creative team working with the venue) and you know you’re in trouble.

We were met by an over bearing character who put hoods over our heads and led us off. Laughing nervously, we found ourselves in the main part of Icombat, where weapons and debriefings are given for the huge array of combat games they play there. It suited the Apocalypse theme as it felt like we were in some sort of military stronghold. As we changed into white bio suits, the news on the television was showing reports of infections around the world.

“CAN YOU DO THIS?!” We were civilians with a Commander barking orders at us telling us we had to assist a missing team in the infected zone. Armed with a tactical laser gun but limited rounds, we were thrown in like lambs to the slaughter.
​
As soon as we entered the dark, indoor combat arena, we could hear the moans and screams from zombies shambling around the area, looking to feed. Quite nervously we descended a slope, back to back, guns pointed, scoping out every inch of the first room when two female zombies absolutely launched themselves at us. Forget shuffling, arms out, slow zombies; the zombies in Apocalypse were demented and fast!
The pace was set, and in every part of the show we had zombies hunting us, running at us and jumping over scenery. Kudos to the actors playing the zombies as they were totally believable; falling violently to the floor when shot, and generally flailing around and throwing themselves into walls!

Eventually separated, pinned to a wall and out of bullets, we realised, if this was the zombie apocalypse, we would be dinner by now! Although we tried to fight on, we genuinely had no chance, as every zombie in the event gathered to block our exit. They really let us have it - soaking us in fake blood, biting, clawing and pulling us about, just to make sure we knew that we had been caught. It was a genuinely exciting and intense ending

Our only complaint? The event was quite short at just 20 minutes, and we would have loved to have run around even more. As it was,  Apocalypse was only on for one day as a tester event, but seeing the quality of the team, actors, setting, scenes and make up etc, we have no doubt it will be back in the future. 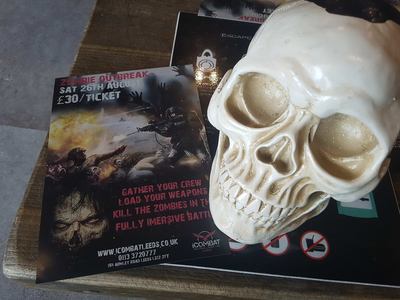 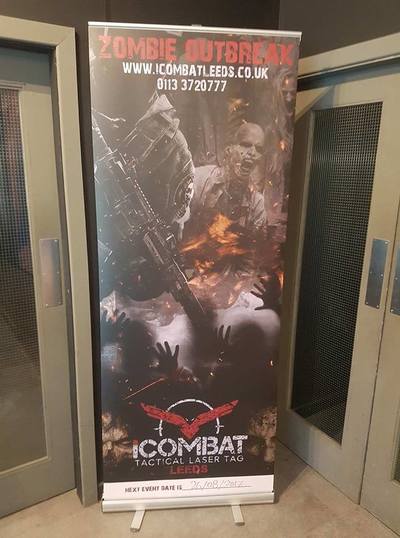 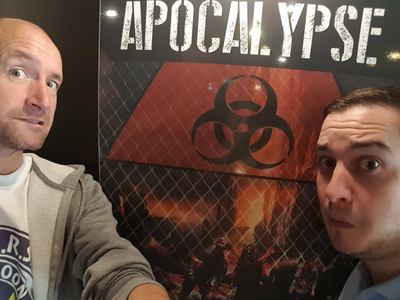