We didn’t really know what to expect from Yorkshire Scare o Drome. The event has generally kept itself under the radar and apart from the name – we knew nothing about the event or story itself. So, when we turned up to the secluded meeting point, we kept ourselves warm by the fire pits while wondering what was coming next. We were asked to sign a quick waiver and then suddenly we were blindfolded and sent on our way.

We were led by a rope through an enclosure - the room alive with voices, and hands grabbing at us at every opportunity. Every now and then, we were removed from the rope and made to go to the back of the group, or in a different direction. The maze seemed impossible to escape from, as it felt as though we had gone round multiple times reaching the same spots and being puzzled as to where to go next.

Eventually we reached the end, where we were chosen, one by one, and our blindfolds removed. While we struggled to get our vision back, there were shadows lurking in the corners of the room and before we knew it actors were there to scare us. We had so much fun in this maze, genuinely laughing, jumping and not knowing what was going to happen next!

We then went on to the second experience. and were pointed in the direction of some open gates. As we walked down we noticed a small white van, and we jokingly wondered if they would bundle us into it , never expecting that that is exactly what they was going to do next! We were all crammed into the back of a van, the doors closed and the van sped off to an unknown destination. Eventually, the van came to a stop where we were ordered to get out and pointed to the direction we needed to go.

Our route through the woods was dark – really dark. With only a candle lit path to follow, the whole group were thoroughly unnerved, especially with the woods themselves adding natural noises to the effect. We eventual came to a little house in the woods, where we met a little old woman, who soon told us to leave and the woods became alive with jumps at every corner we hurried, as fast as the light would let us, before finally we reached the end.

For quite a “low key” event, we would not change a thing and it has to be one of our highlights of the season. We thoroughly enjoyed both mazes for different reasons, but the woods maze had something a little extra just due to the location and atmosphere.
​ 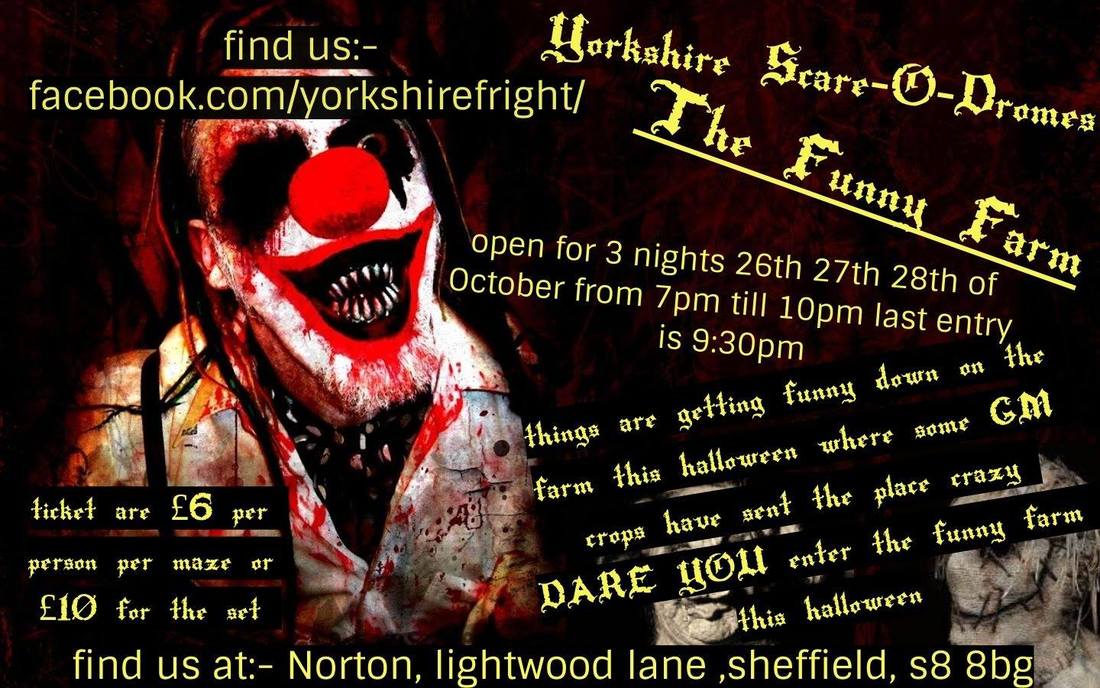 It's quite surprising that as one of the biggest cities in the UK, Sheffield does not have a regular seasonal scare. So hopefully this has now changed, with the opening of Scare-o-Drome on a old disused airfield on the outskirts of the city centre

The event took victims on a long journey through  woods, roads and disused pathways filled with monsters. It was a perfect venue for a late night October stroll and upon arrival, we already had a feeling of dread as even the car park area was in pure darkness. This gave the whole area a very spooky feeling before we had started but it did make it quite difficult to find where we were to go! We eventually spied faint lights in the distance and headed towards them, where we were met by friendly faces.

After a briefing we were handed one touch between the group and sent on our way with just one instruction "follow the lights", in the distance we could see small tea lights guiding a path, and this was to be the only form of lighting we saw through the long 25 minute walk. This isn't a criticism - we loved it! The perfectly placed tea lights plus our torch gave us the feeling we were always surrounded by darkness and unsure where the next scare should come from. But at no point did it feel like we were lost.

Along our journey there was long distances, where we never met anybody but this just seemed to ramp up the feelings of dread of who, or what, we were going to encounter round the next corner or just out of reach of our torchlight. Sadly our only real negative about our experience was that we met a vast amount of different characters and small sets scattered on our journey, but there was no underlying storyline,In fact, it was difficult to work out why we were on the walk or what our goal was. With just a small amount of tweaking and a very simple background, this could've changed the attraction into something very impressive. But, even in its raw form - it was a hidden gem.

As a first attempt the attraction was very simple but worked so really well to create a feeling of nervousness - even for seasoned scare attraction visitors. Overall it was a fun and very spooky attraction and can't wait to see how's the team and event evolve next year. ​