Now in it's second year at their purpose built facility on Hell Lane in Wakefield, The Yorkshire Scare Grounds had a lot to prove. In 2011, we described it as a bit rough round the edges but we could see it had massive potential so we knew we had to visit them again this year.

As such we are really pleased to say that they've made an amazing effort this year which has helped them create one of the most detailed and immersive events of the year, with some incredible scares from beginning to end.


Unlike a lot of scream park concepts - The Yorkshire Scare Grounds is effectively one long attraction where you visit each individual maze in turn and uniquely tells one story from beginning to end. It's a very long route through the whole park so with our timed ticket in hand we headed down the trail to see what awaited us. 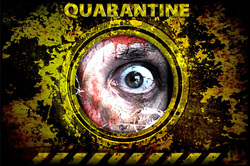 The first attraction along the route was Quarantine and it is here that the extent of the zombie virus was identified and where we subjected to decontamination. It was a great start to the whole experience, especially  as a couple of people in our batch were actually too scared to proceed any further! Once inside, the maze was very confusing with a long twisted layout, some very dark smoke filled tunnels and what seemed to be a huge number of men in decontamination suits waiting to pounce from well disguised hiding places. 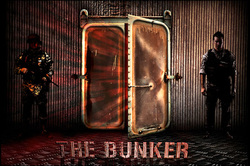 The Bunker uses the incredibly detailed mine set that was built for 2011, but unlike last year, seemed to be full of actors ready to attack.
Alongside the actors were some very loud special effects including gunshots and explosions which reverberated round the tunnels creating scares from every angle. Compared to the bright clinical whiteness of Quarantine, this maze was exceptionally dark and depressing. 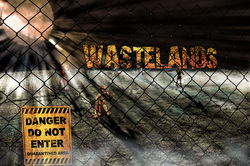 The wastelands was less of a maze attraction and more like a cornfield/ scarezone as we tried to make our way to safety from the besieged Bunker. Despite the low height of the crop (possibly weeds but this actually suited the theming better than corn) we could see across the field but fortunately the actors were very good at staying low and avoiding detection. at one point in the distance we could see a very tall zombie which was obviously an actor on stilts but unfortunately he had gone by the time we arrived at that spot - It would have been interesting to see how he might have scared us. 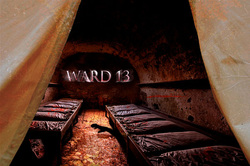 As we approached Ward 13 we could smell a faint trace of TCP or Germolene and once we stepped inside this marquee maze we could see why. The hospital for the infected stunk like a medical facility would and as we slowly made our way past rows and rows of bodies we were never sure what would attack next. Like Quarantine, the white walls and the intense lighting and smoke made this maze almost impassable and at every turn we were fumbling for an obvious way to go. It didn't help that the actors were so lively and picked on all of us relentlessly! 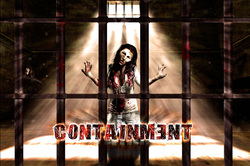 The final maze of the whole event is Lockdown, which was a prison style facility where the captured zombies seem to have escaped. The opening scenes of this maze were incredible with some really detailed theming to show the broken open cells, graffiti covered walls and a disgusting toilet scene that made full use of some of the worst smelling smell-pods on the market! Unfortunately the amazing looking opening led into a strobe maze finale that resorted to the Heras fencing effect that we bemoaned about in our 2011 review. If this fencing maze had been anywhere else we could have overlooked it but as the final scene after 5 other amazing mazes it just felt a bit out of place. Which is a shame. Fortunately, once through all the mazes, the park's icon characters had one final laugh at our expense before we finally escaped to the safety of the catering area.
This year, Yorkshire Scare Grounds have presented a cohesive story that runs from the start of the event all the way through to the end, unlike before where we went from a funhouse to a mineshaft with no explanation in between. Granted some of the long walks mentioned last year are still there but at least the zombie attacks along the way fit in with the whole story and are not just random scares to break up the walk.

So all in all a very impressive 2nd year from the Fearmasters team. We certainly had some very good scares throughout and were really impressed with the attention to detail and story throughout. Definitely one not to miss this year!

Definitely worth the money and worth pre-booking tickets. Me & my mum were part of the 3rd group to enter the attraction and ended up at the back and my mum couldn't stop screaming and I have to admit, I had my fair share of screams for the night. And I'm terrified of clowns and to finish the attraction, the last part of it is a clown with a chainsaw and they penned us in for a few minutes and he got right in my face and touched my leg with it and I honestly thought i was going to die I was that scared, I curled into a ball against the railings and cried ha ha. I cant wait for next year and i wanted to go back the next day but no one would go with me. It was very well organized and can tell a lot of effort went into it and the actors were amazing, definitely looked the part. Well done to Fearmasters and the zombie crew at YSGSC!

Well worth its money loved it.

awesome layout especially ward 13 i was terrified in there and the way it was easy to intermingle with the actors afterwards,

actually have to admit i wet my pants when i went in ward 13 and came across a smoke filled room that smelt like death and a terrifying creature kept jumping at me from the smoke shouting "your mine" lol didnt think i was ever gonna find the way out!!! cant wait for next year massive well done YSG :)

Also visited The Yorkshire Scare Grounds? - tell us what you thought here