Xtreme Fright Nights is a brand new event held at Twinlakes park in Melton Mowbray. Last year they experimented with horror with the Fright Nights event which had rave reviews from everyone who visited  Emboldened to go even further for this year, the park announced Xtreme Fright Nights and employed Scream Park Productions (the team behind Tulleys Shocktoberfest) to help them turn the park into a scream park. So in the first full year as "Xtreme", has the gamble worked?
The first thing you notice around the park is that a lot of effort has gone into creating an  exciting atmosphere. Search lights dramatically light the sky, small log fires keep people warm and a number of roaming actors can be found throughout - one of our favourites being a "Ring" style girl who played out a small scene getting in and out of a well.  But of course any quality scream park needs attractions,  so what did the park have to offer? 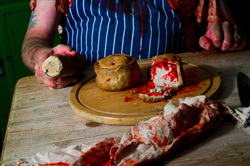 The Pie Factory is the park's signature attraction and starts with great theming in the queue-line. The story ingeniously plays on Melton Mowbrays famous pork pies and this is our chance to see what really goes into them.  From an opening monologue by an Esmerelda clone,  through to a terrifying chase with a chainsaw, The Pie Factory delivers scare after scare with ingenious hiding places, fast paced actors and some stunning set pieces. Although built in a series of packing containers, they actually add to the story and cleverly look like part of the scene as opposed to just a convenient structure as in other parks. The effects and attention to detail throughout are top class and even the obligatory claustrophobia tunnel is quite different to what we have experienced before.  A small niggle was that a couple of times the actors only scared the front of the group but we are sure that as the run continues they will get better at working the space. Aside from that - The Pie Factory is already lining up to be the hit maze of this season! 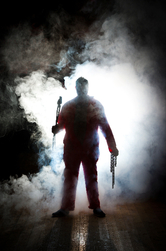 It would seem that 2012 is the year of the hoods as Punishment is set in a fictional prison where we have been sentenced to death. With hoods on our heads we were instructed to hold onto the person in front and make our way through the correctional facility. The attraction uses a massive children's play structure and the path undulates up and down  and even stops for a crawl through tunnel at one point.

Along the way a number of actors yelled at us through the darkness and it was difficult to know where these attacks would come from next. After what seemed forever in the dark, we were finally instructed to remove our hoods and make our escape. The ending was a particularly fun finale that although dropping us into a strobe lit room could have done with one final pay scare as we landed!

All in, Punishment provided a dark and a scary experience that was completely different to the scares in The Pie Factory and made it stand out as the parks second biggest attraction. 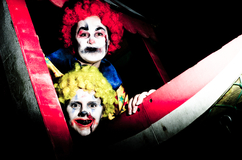 Curtains Chaos is another installation of the never ending clown labyrinth such as "It's Curtains" at Tulleys. The problem with these mazes is that they work really well when you are just in small batches instead of one big conga line. Fortunately for us , this was how Twinlakes were running it which gave a great experience BUT seriously reduced capacity and as such the attraction had a massive queue all night.

The actors were particularly lively in here and the maze rung with the screams of other groups ahead and behind us. Towards the end we actually got a bit lost as there were places where the route double backs on itself. With the smaller batches we really enjoyed our experience with the clowns. 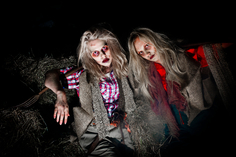 The Farmhouse of Fear is a permanent attraction at the park that has been updated for Halloween with a few lively actors. The main sets and effects are the sort of things you would expect in a ghost train but the additional actors provide a fright factor that wasn't originally available.

Being an existing structure, there's not much in the way of cut-throughs or boltholes for the actors but the few in here seemed to be having fun scaring us. At the batching point we were asked to split into small groups which worked much better than a regular conga line and despite the low capacity - the queue moved quickly all night. 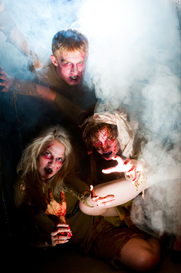 The Dungeon appears to be an indoor family maze that has been given a makeover via a few actors. The lighting was set quite high and we could see a lot of the family friendly "George and the Dragon" images on the wall.The actors inside here provided a couple of good jumps although they had a very large area to cover and sometimes we would walk for a while without any contact. Disappointingly - in certain places, the maze walls didn't reach down to the ground and we kept expecting attacks to come from here but they never did. Going forward, the actors could use these gaps as cut-throughs to enable them to scare people more than once.

In summary, The Dungeon has the potential to be better if the lights were dimmed a bit more and the actors got a bit more imaginative with their scares.

Sick Savoy was an unusual attraction that tried to gross people out with sick humour and some fake torture. After waiting a while for the previous people to leave, we took our seats in the restaurant and watched the "action" unfold. We couldn't work out whether it was supposed to be a one act play or something that you could just walk in and out of. The queues outside didn't help and perhaps these actors would be put to better use in an attraction or scare-zone as most people were leaving after just a few minutes inside. 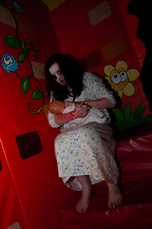 The playground  was a small children's playground populated by dead zombies. We didn't get chance to spend much time here but it was suitably creepy with "dead children" quietly playing on the play equipment. A nice fun element that we would have liked to explore more if we had time.

We visited Xtreme Fright Nights on a very busy press night and unfortunately the park has a few capacity issues to sort out as queues were extremely slow moving and long. In fact The Pie Factory was easily an hour for most of the night and we waited 45  minutes to enter Punishment. The other mazes weren't that much better.  Having said that though - this was the first night of operation with a capacityy crowd and we know that the management will be working this week to rectify this before opening.
Twinlakes have taken a massive step this year with the creation of Xtreme Fright Nights and it is clear that they have some really ambitious ideas. When the designs are on top form (such as The Pie Factory) they are some of the best scares that you will see all year and we would love to see the rest of the mazes match this quality. But it's a great start to something that we are sure is going to become a must see event in our annual Halloween itinerary!
Links:

Have you also visited Xtreme Fright Nights? Why not leave us a review? Click here for more details.