ScareTOUR had such a great time at the Ventnor Ghost Walk last year (see 2011 review) we decided to see what else the spooky Marc Tuckey had to offer. Alongside a new Ghost Bus Tour, a number of new and different walks have now been added to the line up:

This is no hard-core scare attraction, coming at the opposite end of the scale to the severe scares offered by the likes of the Halloween mazes we all know and love. It would not be fair to compare it against such events but it is definitely in the same industry – offering scares and also deploying scare actors to add to the experience, as we shall see.

Setting off from the famous Spyglass Inn on Ventnor Esplanade, the tour is led by Isle of Wight historian and ghost expert Marc Tuckey. He is a storyteller par excellence and, as an historian, also has the experience and knowledge to back up his stories with fact. All aspects of every story are backed up with relevant facts and details and he was able to answer any and all questions the group had. This is no mere storyteller reciting a script!
Marc’s unique appearance, dressed in slightly “out of time” semi-Edwardian clothing, adds to the atmosphere and his storytelling blends tenses neatly, giving the impression that he was there at the time of many of the tales he tells. He would be a great candidate for an “old-school” Doctor Who!

The storytelling is set against the atmospheric backdrop of the clifftop paths that lead from the seafront up to the park in Ventnor, ideal for creating a mood and also offering places for our group to be hijacked by the trio of scare actors in Marc’s employ. The first scare, a simple impact attack, was very neatly delivered. The creatures had been waiting in the bushes for the entire duration of the “welcome to the walk” speech and struck as we set off to walk up the hill, just as a false sense of security had been created. They then took off up the hill, vanishing up a different path than we were using, ready to strike again later. The actors were not just used for impact scares and to get screams, they also neatly augmented the storytelling by walking along higher paths in the background whilst a tale was told of a sinister figure, or by re-enacting the fleeing figure of a jilted bride. (Apparently Dickens’ inspiration for Miss Havisham came from hearing the tale whilst staying in Ventnor, although other sources do contradict this.)

It was a shame that the tales themselves repeated some of what we had heard on the previous walk at Ventnor Botanic Garden, but, with the walks’ locations being so close together, that was perhaps inevitable (especially when the majority of customers are unlikely to be taking part in both walks.) The clifftop paths were also restrictive of the opportunity for scares – they are narrow and many have no guide rails, so a badly timed impact scare could literally cause someone to jump to their death! Being a public area perhaps also reduced the atmosphere, as random dog walkers walking by in bemusement created a less immersive vibe than at the Botanic Garden. Or perhaps the vibe at the Garden walk was stronger because it truly is, as Marc claimed, the most active haunted site on the Island. 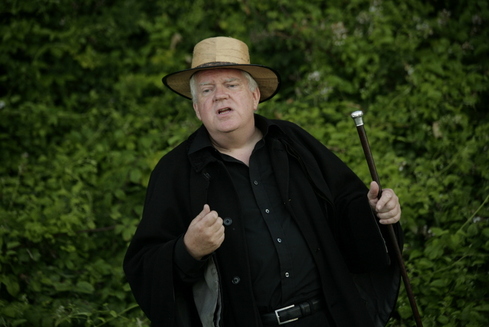 Storyteller Mark Tuckey
The big disappointment for us came from one of the scare actors, though, who broke character at least three times! The creepy robed monster destroyed the mood when it joked in a youthful voice with the people it was meant to be scaring and we don’t expect to hear “sorry mate” from a ghost as it brushes against people while moving through the crowd! The actor seemed more like an enthusiastic trick-or-treater than a professional performer.

Nevertheless, with the Isle of Wight Ghost Walks, the narrative is king, and Marc Tuckey is the king of narrative. Really it is all about good ghost stories, told by a master storyteller and in this respect there was no disappointment. We look forward to experiencing more of their walks and events in the future. They also do full-on overnight ghost vigils at haunted Island locations. Take a look at their website for full information on the walks, events, and famous books by Gay Baldwin that contain many of the spooky tales. www.GhostIsland.com

Have you also attended a Ventnor Ghost Walk? Why not tell us what you thought by sending us a YouReview? Click here for more details