Halloween Unfairground presents five attractions again this year. With three re-themed mazes, we were hopeful of a good night.

Strolling along the main walkway to the pier, funfair music and atmospheric lighting greeted us and immediately set the tone for the evening.

Based within the Grand Pier after dark, and with the majority of arcade games shut down for the evening, Unfairground immediately presents an environment that feels very eerie. We loved the human Zoltar machine and the fire dancers - it seems the event have really focussed on their roaming character offering.

First up, we headed upstairs to the Puppet Museum. Usually home to the Museum of Memories, this was an attraction that used its space really well. This maze used curtains to great effect and we really liked a dead-end trick which caused some genuine panic amongst our group. The actors within worked the space they had well and this made for some good jumpy moments.

Next up, we headed for Carnevil, the parks hooded maze. Special credit must be given for the pre-show as it explained the story behind why we were being hooded and was delivered with a really strong individual performance. Without the usual rope to guide us, we were led into the maze and let loose with absolutely no way of knowing where to go. This made for quite an intense and very disorientating experience. The actors used sound really well and a way of both terrifying us and giving us some clues as to which direction to head in - the only trouble was, we didn't really want to go towards them! Carnevil was a great example of how scary hooded mazes can be.

We then headed downstairs and made our way to House of Horrors: Alive. A temporary repurposing of the existing ghost train with some added actors. The actors inside were so good at blending in with the animatronics, that lead to some great surprises and really good jump scares throughout.

Next we headed to the Crazy Circus, a funhouse attraction with added clowns. The mischievous clowns within certainly made navigating the attraction difficult and made for a really fun experience. Definitely not one for the coulrophobes among us.

Finally, we ended our evening with Cirque Du Fear. Unlike the other attractions within Unfairground, Cirque du Fear is a purpose built attraction, with some really great sets and theming throughout. Using the sets well, the actors within were lively and quick witted, and we experienced some great scares throughout before being chased out into the bar by not one, but two chainsaws!

Whilst small, Unfairground certainly offers a fun experience, and with rides included within the entry price, presents a really fun night out for all. 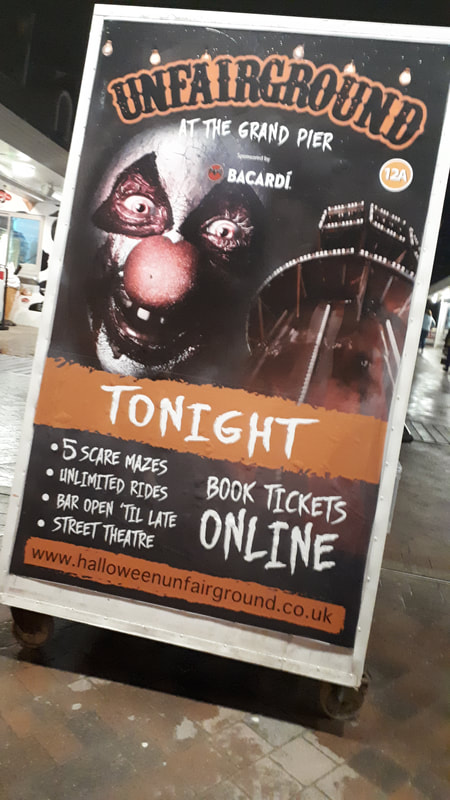 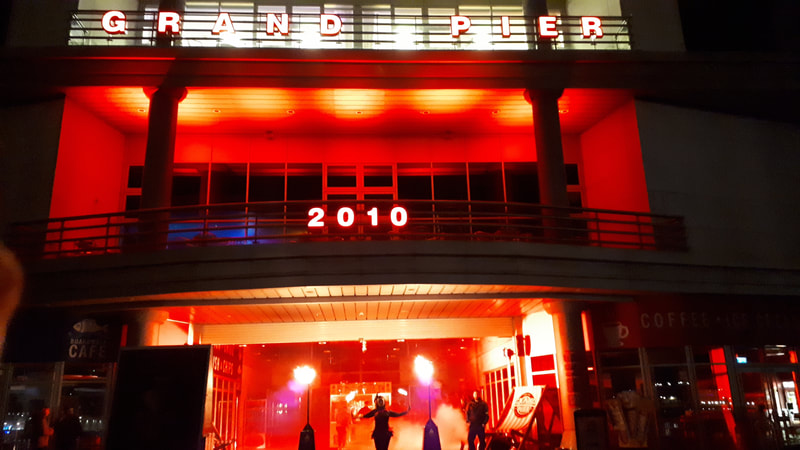 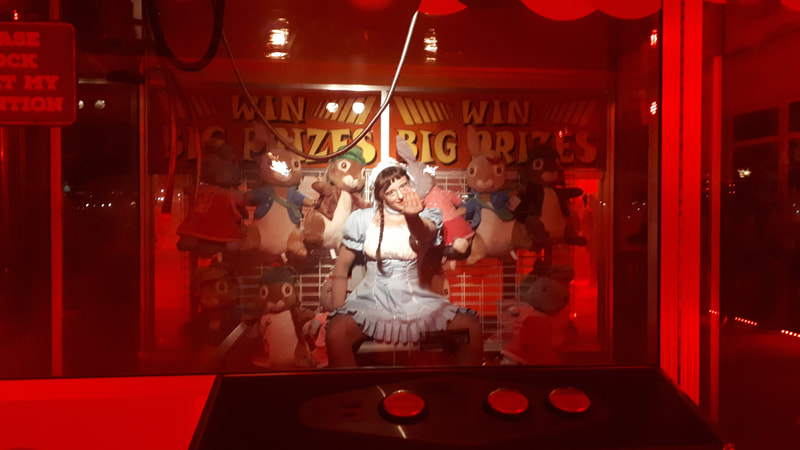 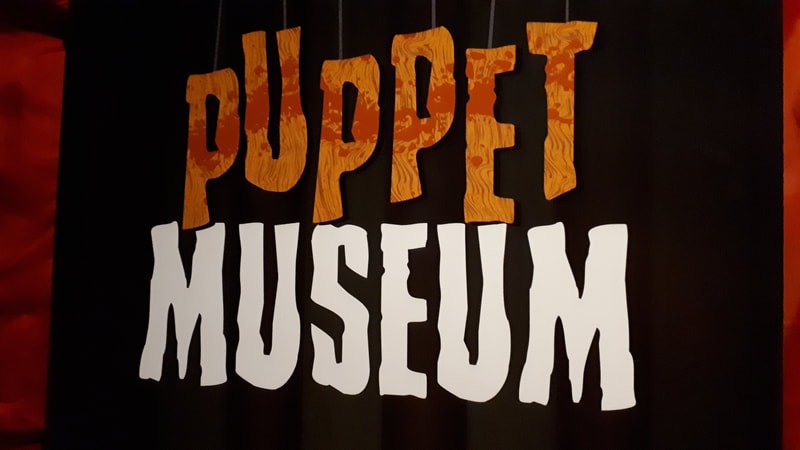 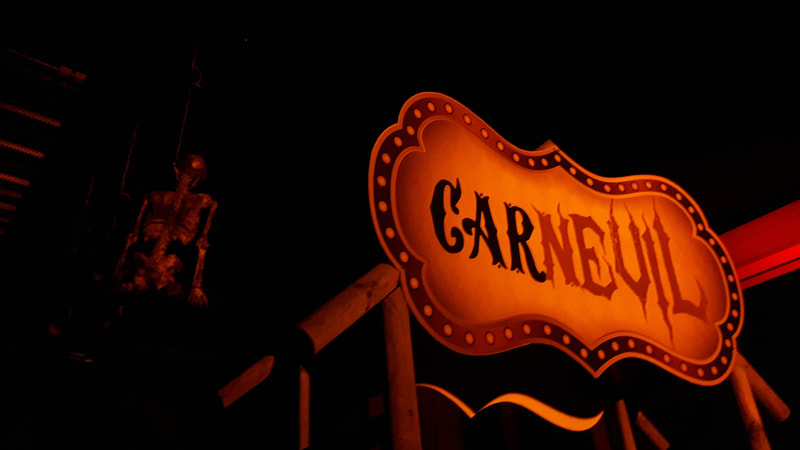 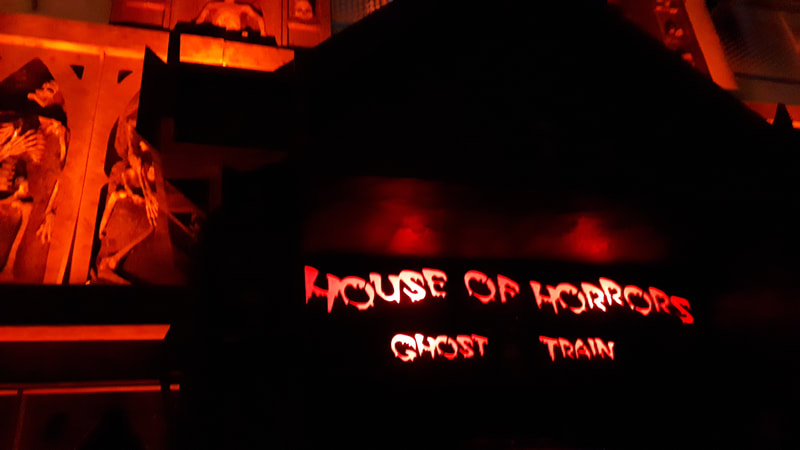 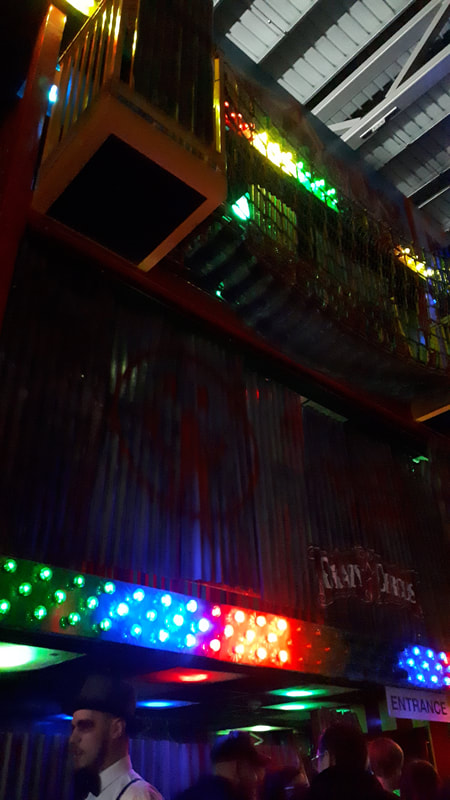 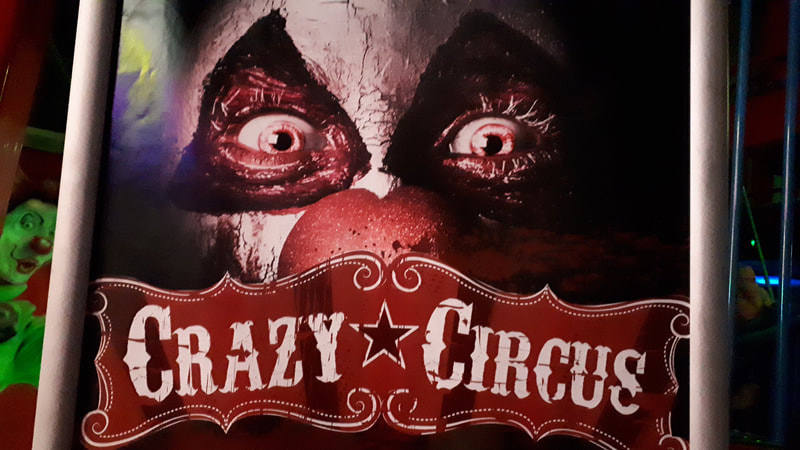 Now in its third year on the Grand Pier at Weston Super Mare, Halloween Unfairground has expanded with some new experiences for 2018.

First up – the main walkway to the pier has been used to create a grand opening to the park with a theatrical scene involving Punch and Judy that led to us being chased INTO the event. It was a great start to the night and as we walked down the dark promenade, a number of creatures attacked us along the way.

Once at the end of the pier, the spooky funfair music was blaring and with the lights turned down low, the venue had once again created a very creepy atmosphere. Several of the rides and attractions were open, but we headed to the scare attractions first.

House of Murders was a small walk through part of the park’s fun house. The scenes of murder, gore and blood were slightly at contrast to the colourful walls, but some effort had been put in to create a darker feel. The actors were quite lively and we had a couple of jumps along the way.

Crazy Circus is another fun house set attraction, but this time populated with killer clowns. The clowns were certainly lively in here and tormented us as we tried to make our way through all the obstacles and moving parts. More fun than scary, but if you hate clowns then it would have been a real nightmare!

House of Horrors Alive is a repurposing of the existing ghost train with some live actors inside. The darkness and the effects provided some solid jump scares, that had us screaming in the darkness.

Upstairs, the park’s mirror maze has had a whole new storyline, and soon after entering we were hooded and led through holding on to each other. The scares came thick and fast throughout, and with sudden noises, and the fact the actors could touch us – we had a number of good scares in the maze itself. It shows that with some clever thinking and effects that hooded mazes can be scary. This was our favourite of the night until we entered Freakshow.

Unlike the other mazes which were just overlays of existing attractions, Freakshow was a custom built maze with good quality theming and impressive scenes throughout. We had a number of good scares from the lively actors, as we tried to make our way through. The creative team had added a few obstacles which slowed our progress at times, which we are sure was just a stalling tactic so the actors knew where we were and could attack! This definitely was the stand out attraction of the night and we would love the venue to add more custom attractions like this as the event grows.

All in – Halloween Unfairground is a fun event, which is definitely worth doing if you are in the region. The mazes may not be the biggest and scariest, but with the rides included in the entry price, there is certainly a lot to do for an evening out with friends.

Now in its second year - we really didn't know what to expect from the Halloween Unfairground. The location at the end of a very dark pier is certainly creepy, and the walk to the event was enhanced with several actors attacking our group. Once inside the atmosphere was incredible. With the lights down low and spooky music alongside fire jugglers, and roaming characters - it really gave the feel of an abandoned fairground.

The attractions themselves were all re-purposed from the day time venue. The funhouse was populated with killer clowns, the mirror maze was an asylum and even the soft play area came with extra zombies. Our concern was that a lot of the actors were just lurking around trying to be menacing, instead of actively scaring. Granted there were some people freaking out at the live clown following them, but we would have expected more jump scares - especially as the fun house had lots of great hiding places.

Our biggest scares came from a chainsaw attack at the top of the helter skelter and an incredibly lively actor in the mirror maze who stalked us throughout and used the mirrors perfectly to confuse and scare us.

We genuinely had a blast at the Unfairground - the location is incredible and the inclusion of unlimited rides adds to the fun. If the event team could just focus a bit more on the acting talent, this would be a really unique event. 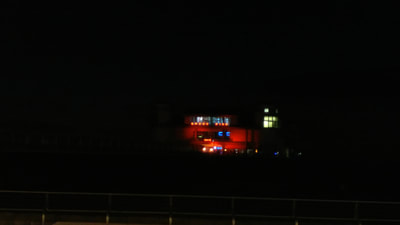 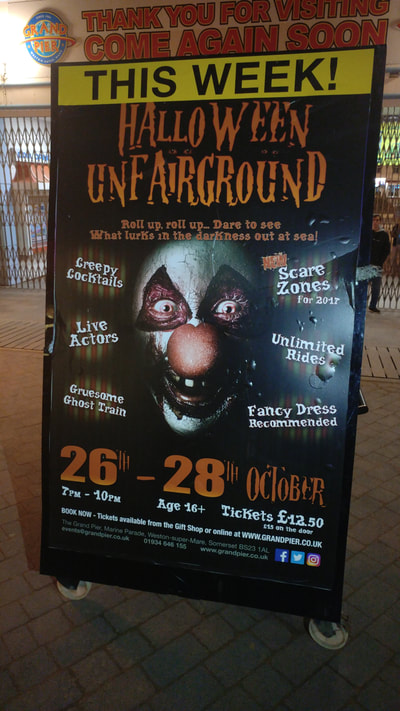 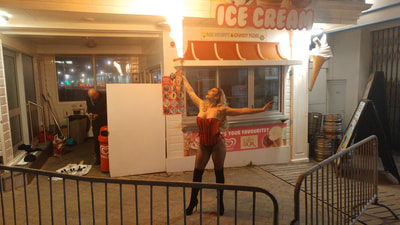 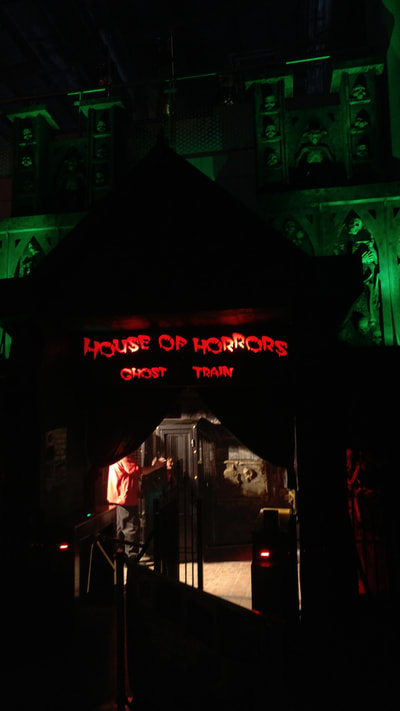 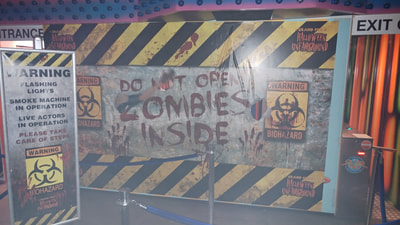 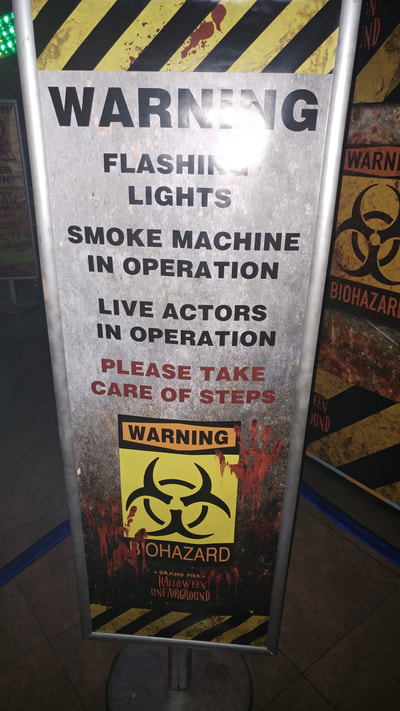 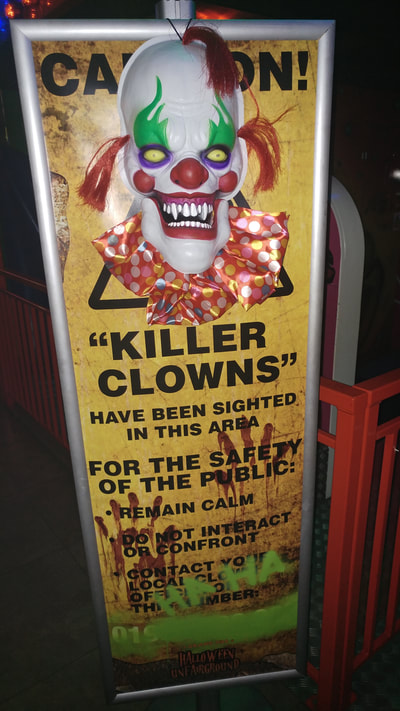 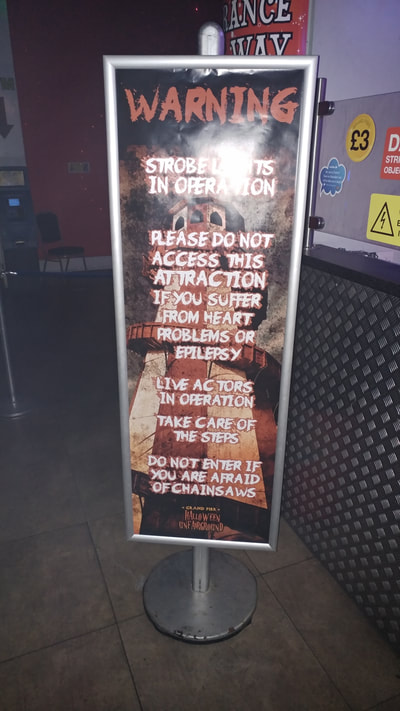 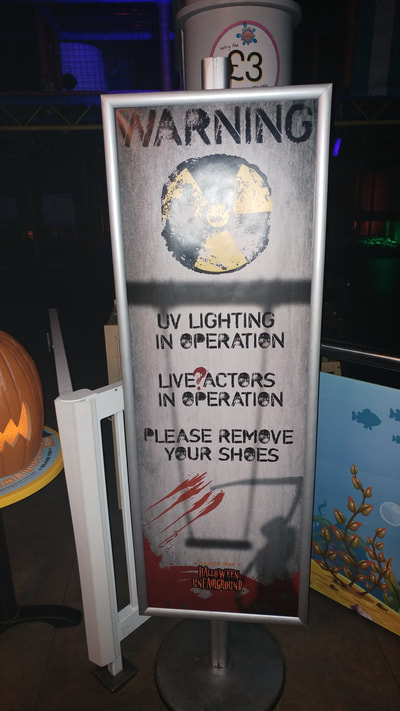 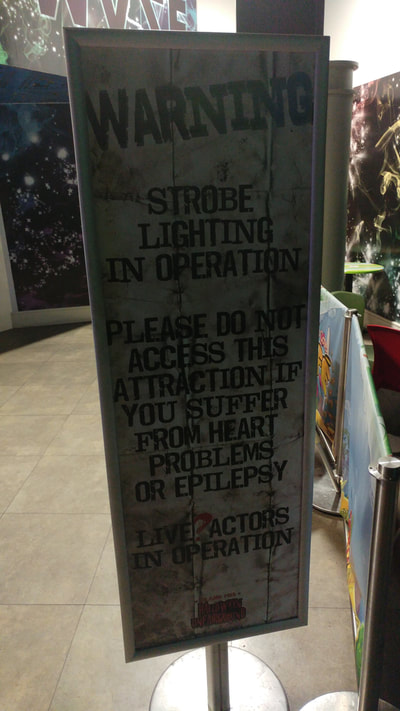 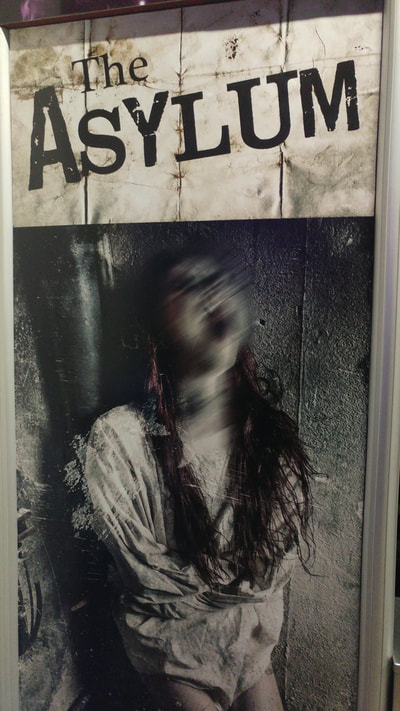 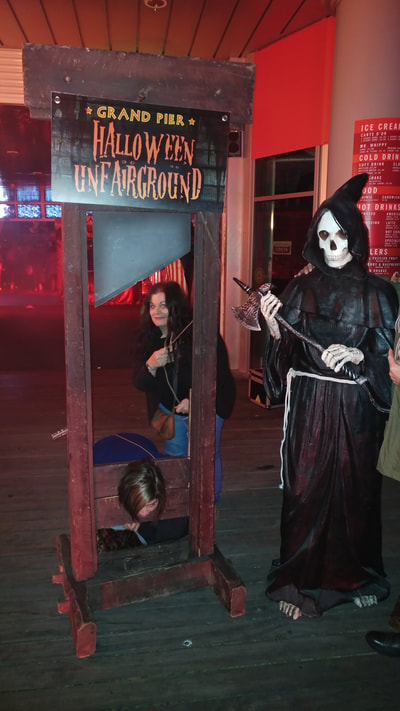 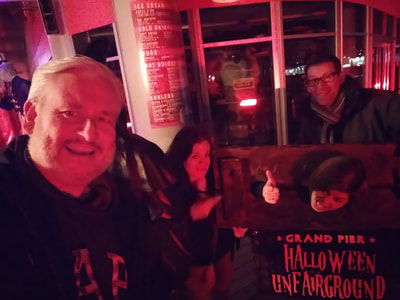