Tulleys Shocktoberfest is the probably the largest Halloween event in the country and is a sort of holy grail for scare fans. The scare community is probably split between those who have been to Tulleys, and those who want to go to Tulleys! It is a park that we attend every year without fail.

This year, there was an extra incentive to visit as the park was trying to break the world record for the highest number of zombies in one place, and as we pulled into the car park, all we could see were white faces and gallons of blood!. The event was free to enter with discounted entry available to the famous scare attractions but most importantly we needed to be counted!

Set up in a normally unused field was a Bright FM roadshow van and we were all urged to pass through the Guinness World record adjudicators in single file to allow the count to be formalised. Row upon row of zombies of all shape and colour headed through to the event field and it was brilliant to see that so many people had made the effort. To help out with the head count, Tulleys were also offering to make people up on the spot if they hadn't come prepared.

By about 7.15, Shane Ritchie took to the stage with Stuart Beare - the owner of Tulleys farm and the official photographs were taken. Unfortunately - the event was way off the world record of 4900 zombies and peaked at a very respectable 2,113 of which we are proud to say our ScareTOUR readers contributed 14 heads! 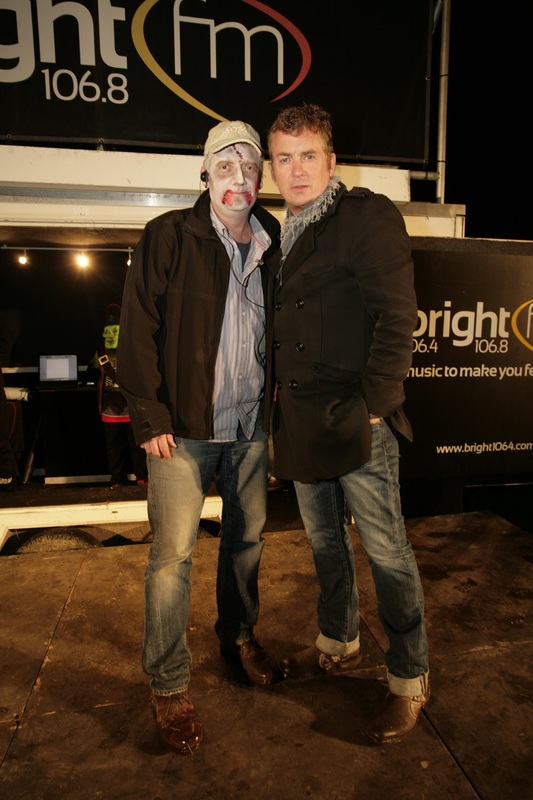 Stuart Beare with Shane Ritchie
After the zombie gathering - it was time to hit the mazes and we were especially excited about the two "new for 2012" shows. Before we did those though we had to pay a little visit to the gorgeous Esmerelda in The Cellar! She, of course, was overjoyed to see us! 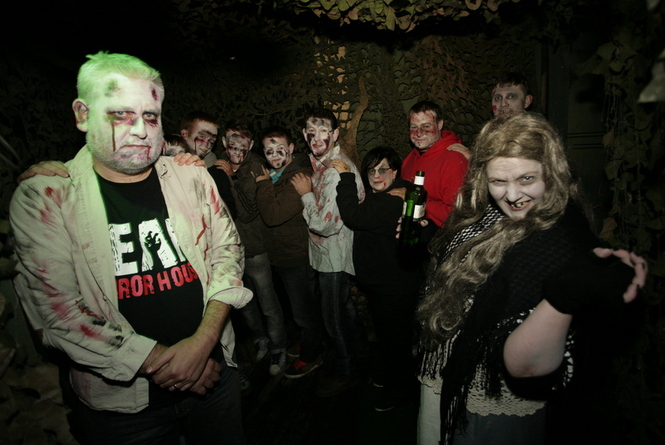 Just some of the ScareTOUR group inside The Cellar with Esmerelda

With the terrible weather conditions this summer, many attractions struggled to grow a decent corn/maize crop and Tulleys is no exception. Where we would normally see 6/7 foot high stalks, the site of the usual Field of Screams was no more than a field of waist high plants. Desperate times call for desperate measures and the attraction has morphed (albiet in name only) to Dr Plagues Trail of Terror.

Unfortunately on preview night, part of the attraction was closed due to excessive rain on the days previous which is actually surprising as even without these extra 5 minutes or so - the Trail is a very long attraction!

It starts in woodland but soon joins up with many of the rooms and effects witnessed from previous versions including the execution scene and the child's bedroom. A few extra scenes towards the start help with the "concept" of  hospitals and doctors but as in previous years, this maze is less about the story and more about long periods of intense darkness, extreme scares and sudden attacks.

Even without the opening piece in the woods - it was still our favourite maze of the night and definitely the scariest attraction at Shocktoberfest this year!

In 2012, Its Curtains has morphed into Twisted for a new and different take on those pesky clowns. Intended to play out like an old black and white movie, the maze has been extended to include different curtains to the now obligatory red and white and then fills the rooms with a mix of silent (but deadly) "mime" style clowns.

With a few other new tricks up its sleeve, we had a couple of genuine jump scares during our run through but unfortunately Twisted, like its brother before it, is only really inherently scary if you don't like clowns.

The Cellar remains the jewel in the crown of the whole Shocktoberfest lineup by being the most complete and immersive attraction. The sets remain well themed and dirty and we're sure leaving the attraction locked up through the winter helps with that smell of dampness and age that permeates everything!

The residents of the Cellar were a little subdued on preview night - perhaps they had all been at Esmerelda's gin but we are sure that the mainly new cast will find their feet before the main run.

Hell-ements remains virtually unchanged from 2011 and is still a very " tactile experience" as you feel your way around the route. The main fear comes from not knowing what or who is around you and we all experienced several jumps and scares throughout. The finale is still as breathtaking as previously!

The Hayride is where Tulleys Halloween events all started and it is still the most popular thing at the park. And it's no wonder - the scares come thick and fast from all angles and the whole thing is an exhilarating mix of laughs and scares. Not to be missed!

The Creepy Cottage has had a small makeover this year with an extra room added at the start of the maze. As before, the it doesn't really stand up to the scares and excitement of the Terror Trail or Cellar, but it still packs a number of good frights within its small layout. Most of the sets and effects are clearly aimed at a younger audience but with the addition of 2 or 3 lively actors the Cottage is capable of providing even a grown man with a few scares.
One of the key things that surprises most people when they attend Tulleys is the infrastructure and facilities that are on site beyond the 6 main attractions.  This isnt some chip van in a field but a properly laid out venue with permanent catering facilities, a wide choice of food and drink alongside a gift shop and a proper restaurant facilities in the shape of the Cut Throat Pie and Mash Room.

Add in the day time versions of some of the attractions, and other diverse activities like pumpkin cannons and the animatronic chicken show, then Tulleys really have created an event that is suitable for everyone.

For more details about Tulleys Shocktoberfest - visit their website:

genral park and roaming actors..
the park lookded great with alot of themeing  and oaming actors about from opening to the closeing of the park. food was everywhere and there was no shorteage of choice and extra small games such as the pumpkin catapults
and the corn cannos really added so there was alot to do and relaxing for 10 mins with a cup of tea in the tea rooms was a fantastic little wind down in the middle of the evening.


the cellar..
a very small and cramped space this is your typical haunted horror house situation with some great set pieces and some fantastic actors. the ligting was great and where it needed to be hiding places
where the actors are, making dark corners and distracting your attention with brillient strobes and loud noises. from beginning to end the whole place made for a terrorgying experience and looked
like a very qulity instalation but it would of been nice to have a longer and much more dramatic ending.


twisted..
full of comedy and scares this was one to get started with. with a great start in a simple curtain maze with only a few paths the clowns could of been almost anywhere. alot of dissorientatiting corridors
and rooms later includeing a ball pit you hit the big tommel which is the most dissorientaiting and sickening one i have ever been in. the whole maze being made of curtains really stood out as not knowing where you
are at any time and leaving the actors to really pick there spot to scare from all directions. again as with the cellar though this maze lacked a big finarlie and just sort of lead out of the maze with no big scare to finnish
it off. a good maze to get started with in the night but needs a big finarlie and a few more actors as it was such a huge maze


dr plagues trail of terror..
this attraction which replaced the field at short notice really delivered alot of scares and was a very very long maze indeed. alot of dark walkways and a very confusing maze with alot of hiding holes really
made this maze stand out. the actors were great again and really delivered every type of scare from phycological to the classic chased out of the maze with a chainsaw it really just ozzed classic horror and
creepyness. it was a shame that due to the wetness of the fields the rest of the forest was not accessable to us but it really did not distract from the overall scares inside.


the creepy cottage..
this is tulleys first atraction and its really showing it with the sets looking dated and the layout being not very thrilling. really needs some new themeing and more actors as when we went it there was
only a few actors in the entire attraction. the actors were very good however and offered a few scares but there isnt much i can say more about it. it is very dated and really needs to be renwed for the
next season


hellements..
a good attraction with a good few scares. the hoods are very dark and the attraction is very simple. it has what i like the call cheap scares which uses the most simple method of using the darkness to get right in peoples faces
get them to jump as well as some fantastic fire effects and water effects. i would like this to be made darker however as 90% of the time you can see through the hood to some degree. overall a good solid
attraction but needs to be darker and have a more confuseing layout


haunted hayride..
this had everything classic scare it. it had all forms of scare from pirates, circus, wild west and zombies. around the ride there was alot of very very good effects and scenes with all forms of scares both
phycological and jump scares taking place. some things didnt work such as the flying pig heads wich it wasent untill the 2nd ride i noticed and no one onboard really did either but the clowns did a good job,
the pirate especially and the final scare and danceing the the monster mash on the way back. over all this ride has everything you would want in a typical horror attraction.

t was good value for money as we used the Groupon deal, otherwise we wouldn't have paid the advertised prices. We had never been to anything like it before and we all thoroughly enjoyed ourselves. In order of enjoyment:- haunted hayride, hellements, the cellar, trail of terror, twisted maze and finally, creepy cottage.

Your Review - tell us what you think

Have you experienced Tulleys Shocktoberfest?  Share your opinions with others!

For the latest offers, exclusive discounts and more - Join the group!
All reviews features and content are copyright of Michael Bolton and ScareCON. Any unauthorised use, distribution, linking of any whole or part will be taken as an infringement of copyright