Torment by Secrets Beneath 2017

With some of the ScareTour team living down south, the eagerly awaited Torment attraction has caused much excitement in having a Halloween event finally nearby.

Situated in Gunwharf Quays, Torment is ideally located for passers-by and is also easy to find.  The event has been fantastically marketed, with many positive visitor reviews being posted on social media.

On a Wednesday evening, the team went along to experience the event and were shocked by how busy it was.  Approaching the attraction, an eerie soundtrack, along with smoke, lighting and a wandering wraith created much excitement with what was in store.  Our apprehension was building with the constant screaming from inside as well as there being no opportunities to see the front of the queue or the hosts until you entered….we felt more unnerved than usual.

Despite the event having such a large queue, it moved quickly and when it was our turn to go through, our small group was batched perfectly, ensuring that we did not meet any other groups whilst inside.  This may have also been helped by various moments where the actors worked with the groups to slow them down or speed them up.  So many times throughout the Halloween season, the team have experienced this not happening and on occasions scares are ruined, making it impossible for the whole group to have the same experience. It really is a credit to the attraction that they can manage this so well despite being so busy.

Once inside, the host was fantastic at creating yet more nervous energy, ushering us into the first room where we were met with an energetic actor.  Almost immediately the scares and touching started.  There have been some negative reviews about the first section of the attraction which is a low ceiling part.  Having a 6ft 3 member with us, this caused them no difficulties and was a perfect length of time to be crouched down in pitch black darkness before being released into chaos.

You may think, as a team who experience these attractions so frequently, we would be used to the disorientation within them, however, Torment made it nearly impossible to work out where we were going. The clever use of lighting, smoke, props and dedicated actors even lead this member of our team who was leading the group, walking into walls and on various occasions leading the rest of the group into a bundle in the corner of the room.

The story line was introduced in the first scene and continued and progressed from room to room where the group encountered many characters throughout a haunted Victorian manor house.  Sadly, the front of our group missed the finale that left so many people running out in shear panic throughout the night. The end of our group certainly made up for the screams though!
It is clear how much work has been done in making this feel like a permanent attraction rather than a temporary pop-up within a marquee. The placing of walls, props and actors made the attraction feel more like an established one rather than one built for a 10 day run.
​
Torment has been welcomed by Portsmouth and with the high volume of people visiting the attraction each night, there is a clear demand for a Halloween event in the South.  We eagerly await news of whether the event will return next year! 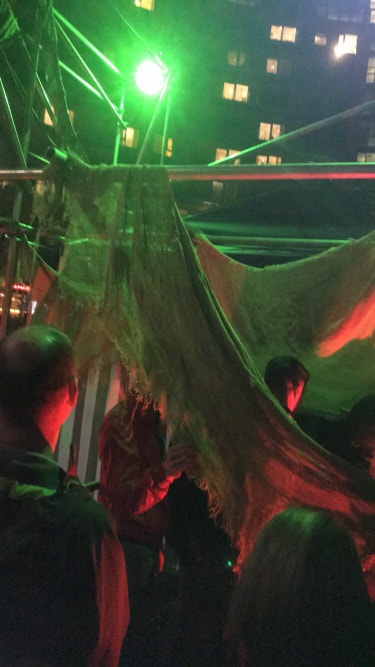 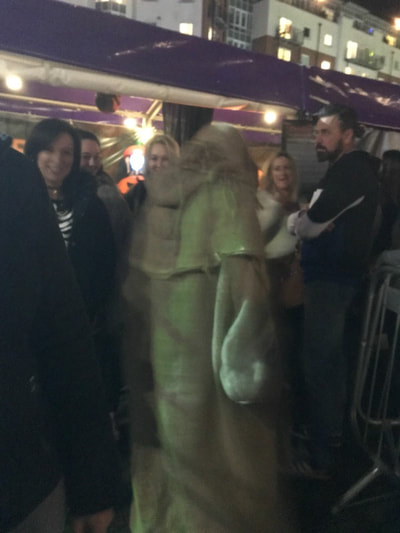 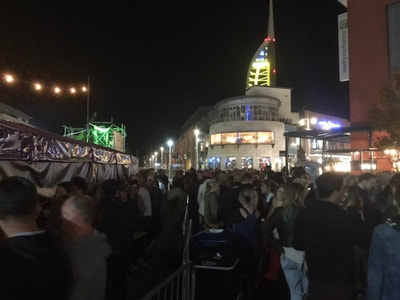 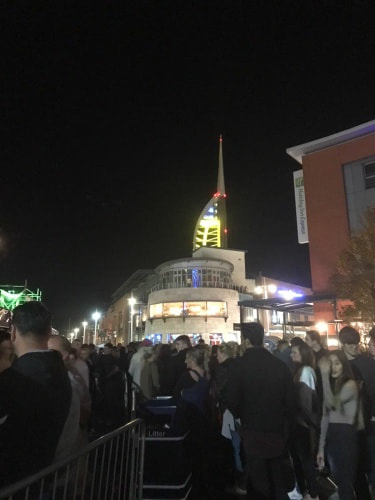 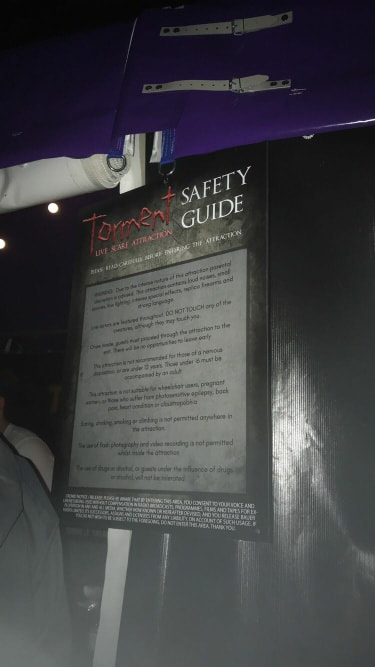 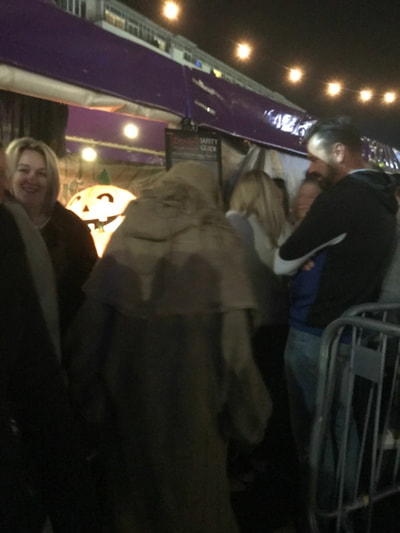 Torment by Secrets Beneath

When somebody mentions Jersey, the last thing that pops into your mind is heart pounding terror. Sure, that guy from Bergerac is a bit creepy and what the Nazi’s did when they invaded during WWII is all pretty nasty, but the general image people have of Jersey is of a small peaceful island with golden beaches, flower festivals and unusually sounding French street names!

So when the team at Secrets Beneath first proposed a scare event for the island, many islanders wondered what the hell they were getting. Was it a ghost train? Was it a theatre show? No one really knew, so when Psychosis appeared in 2012, it sort of rocked the quiet community. It would seem though that the islanders have a taste for blood, as each subsequent event has been more and more popular leading to their biggest attraction yet – Torment.

Approaching the attraction itself – built in the middle of an entertainment complex in the capital town of St Helier, the first thing that strikes any visitor is the impressive “building” the attraction is set in. Covered in scaffolding, and looking like a genuine construction site, it is hard to believe that this is just a clever facade to hide a simple marquee behind it. It’s not even a flat facade but a full three sided construction that really gives the impression of being a genuine building. Once inside – this illusion isn’t shattered in any way, and the ticketing and batching hall is also beautifully themed and belies the fact that is set inside a temporary marquee. In fact at no time in the maze (including in the artistically designed “garden” section) is the illusion ever shattered. Not bad seeing as the first two hours of each nights run are are held in bright summer daylight due to British summer time!

From the outset, the attraction does a great job of trying to break guests out of the usual expected scenarios in a scare attraction. Although told to enter in a single line we are soon separated into smaller groups and a simple misdirection (cue moving wall!) and we are trapped in the house with only one way to go – forward. From then on in, the team chuck everything at the guests – crawling tunnels, claustrophobia tunnels, maze like elements, pitch darkness, crazy set design and even a spinning vortex. The vortex alone is completely unexpected in a temporary attraction and left most guests reeling as they tried to escape.

The sheer creativity of the different environments make this maze feel like some crazy messed up “best of scares” compilation, with each section being long enough to provide a thrill without overstaying it’s welcome or relying on one particular gimmick - as some mazes are wont to do. Every room feels fresh and as such you never really know what is around the corner. Effectively playing out as a massive haunted house, each room was incredibly decorated with an attention to detail only usually seen in the major theme parks. Rooms looked real and the set dressing and decorations were some of the best we have seen. Also each room had multiple actors or scares so at times it would feel like we were being attacked on all sides.

Room after room kept coming and the screams never let up from beginning through to the end. By the time we had escaped the massive strobe soaked finale we had been in the attraction for about 15 minutes – not bad, seeing as apart from the opening scene – we were continually moving throughout Talking of the opening scene – this was the only scripted performance in the whole show, meaning that there was no continual stopping and starting while characters performed their rehearsed speeches. This was pure on scare tactics from beginning to end. Although saying that – there were some humorous touches throughout. We still don’t think we will ever look at a dead pheasant in the same way again!

Most of the cast of Torment have acted in previous Secrets Beneath productions and it’s easy to see why the team have invited them back for another year. They are lively, vocal and in the case of the strobe maze – very agile. They are also bountiful – we lost count of how many actors we saw but with each room having at least 2 or three scares (sometimes set as a multiple attack) they certainly seemed to be coming from every angle every time we went through we noticed different scare.

All the elements mentioned above combine to make an extremely professional attraction that was far better than we had originally expected. It was smart, well designed, managed to scare and delight us in equal measures and more importantly rang with the screams of satisfied customers The team have already started planning their next big attraction and we will definitely take a visit back to this beautiful island to see what they come up with next! If Torment is anything to go by – then it is going to be incredible!

Terrifying
It was great, absolutely terrifying, in case of an accident they are really helpful, and create an amazing atmosphere inside the maze when they are acting, worth the visit :)

Very scary
Slightly expensive, but worth going... far better than the one I went to in the past!!! - Oliver

Terrifying
Brilliant. very scary. was incredible acting, and well worth the money. did a brilliant job organising it. - Barney

Very scary
This is the third event that i have visited organised by Chris & the crew. Each one has got better than the previous . They seem to take on board comments that people make that can improve the attraction.
It's a well run ship and well worth the money.
Top work lads, really enjoyed it - Mally

Very scary
Such an amazing night we had last night!! all of my friends and me enjoyed it so much! thank you! suck amazing actors and actresses i would definitely go back next year! thank you so much! - Jack

Very scary
THANK YOU so so much for such a great event!!!, everything was so well done, from the customer service, to the whole experience at Torment!, your Team is doing a super-job and we all had the best time. I made sure I bought some pictures from you as I felt the money we paid was not enough to retribuit all the professionalism, the talent and the hospitality and the scary experience too. You should know how great you all are, thank you so much and good luck for your future events and activities. I will be telling all my friends about you! x

Torment is a crazy scary walkthrough it makes the ghost train look like home
Terrifying - I loved it -it was so scary
you have to go!

Torment is a crazy scary walkthrough it makes the ghost look like home
i loved it. it was so scary. You have to go! IR

Have been the last two years this was my third year. Good value for money. This year was far the best. They are all so clever on the acting and the thought that goes into this attraction every year. It's amazing to see the transformation inside because from the outside it just looked like a marque but it was truly amazing. Every year I want to go to see what's new and never disappointed. Looking forward to seeing you guys next year (hopefully you will come over again)